Schwartz: It’s the stories that matter

For alumni game, forget the stands, give me a seat behind the bench 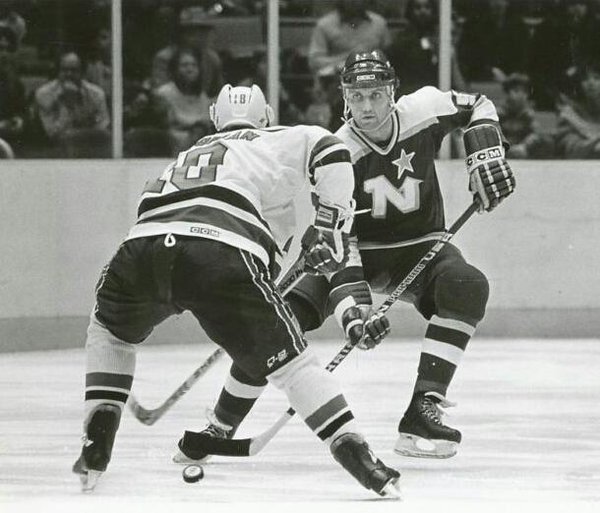 Brad Maxwell in his heyday with the Minnesota North Stars. (Photo courtesy of Vintage Minnesota Hockey.com)

For alumni game, forget the stands, give me a seat behind the bench

Recently, for my day job at KARE 11, I had a chance to sit down and chat with a few former Minnesota North Stars. We did a fun bit about how well the former teammates know each other and I gave them a little quiz — I know, real hard hitting journalism!

After talking with the four players (Tom Younghans, Reed Larson, Jack Carlson and Brad Maxwell), I was left with cramps from laughing so hard and the stark realization that, as excited as I am about the Stadium Series game between the Wild and the Blackhawks, I might be even more excited about the North Stars playing the Blackhawks.

But it’s not really the hockey that I am looking forward to most. It’s the hope that I can get close enough to the bench to hear some of the conversations. In fact, I am not sure of the Wild’s ticket strategy but I would pay triple the ticket price if I could just have a seat behind the benches of the old timers. One that has an obstructed view of the ice but that provides me unobstructed audio from the bench. I am telling you folks, that is where the real entertainment is going to be.

I want to hear stories. Forget the hockey, I can see guys hack around and smile ear to ear and my old weekly pick-up game. I want the memories — and you will too.

I want to hear from Lou Nanne and Brad Maxwell about the trade that brought him from New York in 1987 — about how Nanne was able to win him back in a card game (according to Maxwell). A story which made me openly skeptical when I heard about it.

“No foolin!”, Maxwell told me that afternoon.

I know it’s been nearly 30 years, but I’d give anything to hear Nanne recount how that went with then New York Genera Manager Phil Esposito. How did it come about? What was the game? What were the stakes? And maybe most importantly, what was that moment like when he won his prize?

I also want to hear the off-season stories. It’s hard to imagine but as late as the 1980’s some professional hockey players still had to get off-season jobs. Jack Carlson told me that one year he dug graves just to keep a salary coming in. Now, Carlson admits he didn’t get the big bucks of an early top round pick but he couldn’t have been the only one having to make ends meet outside of the season.

Forget dryland training and morning skates, when the season was over guys had to pay the bills. Then when they went back they had an even larger fanbase of people they just spent months working with. I mean honestly, just imagine a scene where Zach Parise is bagging groceries or Nate Prosser is caddying at a golf course so that they can keep a steady income. It just goes to show just how much salaries have gone up in such a short period of time.

But there might not be any stories that I am looking forward to more than the ones of camaraderie between teammates. Just like today, these guys spent their lives together. They were friends and family, they knew each other’s family. They played seasons and, sometimes if there were lucky, post seasons together.

“Nothing binds you together quite like a Stanley Cup run,” Jack Carlson told me with a huge ear to ear grin, that seems to be permanently affixed to his hulking frame.

His team made it to the Stanley Cup Finals in 1981 before losing to the New York Islanders who won their second of 4 straight. Still Carlson wears a big championship ring on his hand that he and his teammates bought for themselves for winning the Western Conference that year because, as he told me, you don’t get rings if you didn’t win the title.

I want to hear the stories of the road trips, the ups and downs, the team chemistry, the rivalries and the pranks (some of which I heard from Reed Larson and Tom Younghans, but cannot recount for obvious reasons).

I asked all the players if the rivalry with the Blackhawks was still there and they emphatically answered, “Yes.” But don’t expect there to be any fights, cause the guys are over doing that now and admit that they’ll have enough trouble skating around the ice and getting their wind without trying to drop the gloves.  Plus, most of us just want to watch the game — although I’ll admit I wouldn’t mind seeing Big Jack Carlson throw his weight around a bit.

Sure the game may have changed over the years but the guys who play it haven’t. It’s still a game of deep feelings, camaraderie and love for the sport.

But the one game that might be most exciting Stadium Series weekend, might just be the one that’s a repeat of a game played 30 years earlier.