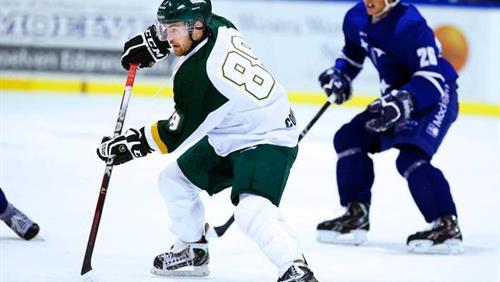 Menu limitations aside, Jack Connolly has adapted well to living and playing in Sweden.

Jack Connolly wants you to know that things are good in Sweden. Except the food. He’s been there for several months now and the food still isn’t good. But everything else is good and he’s looking forward to coming back to Minnesota when his European hockey adventure is done.

In the meantime, the recipient of last year’s Hobey Baker Memorial Award is skating for Farjestad BK in the Swedish Elite League, making plays and frequenting a very small American food section at his local grocery store.

He lives in a team-furnished apartment mere minutes from the rink. His town is Karlstad, which is a bit like Duluth, with 85,000 people and a big lake. Most of the residents speak some English and his longtime girlfriend is there with him, so the transition has been fairly smooth.

“It does remind me of home a little bit,” said Connolly, a Duluthian who skated at The Marshall School and with the USHL’s Sioux Falls Stampede before leading the University of Minnesota Duluth to a national championship. “It’s a great town and a great fit for us, because we’ve never really been big-city people. But the food is definitely different.”

So here we are, back to the food again.

“We found a couple of places that have a decent steak, but not too many,” he said. “They’re big on seafood here. Lots of fish. I like a white fish here or there, or maybe some walleye, but seafood isn’t my first choice. Sometimes they’ll even have that kind of stuff for a pre-game meal. I’m used to my normal pasta and chicken; they’ll come out with salmon and potatoes and schnitzel’s big over here too.

“I’m getting used to it a little, but I definitely miss the food from back home.”

His older brother, Chris, is also stationed in Europe, but he’s in Finland with Tappara of the SM-liiga. The food in Tampere is about the same and they speak less English there, which leaves the former Boston University standout feeling just as hungry but even more isolated.

The brothers use Skype often, comparing their experiences and swapping stories. In an unusual twist, they may be reunited as rivals in late December at the annual battle for European Trophy supremacy. Competition began in September, before European league play, and continued periodically through the fall. It will culminate this year in Bratislava and Vienna where Farjestad BK and Tappara could meet as a reward for finishing atop their respective divisions.

“It’s not for league points, but people still take it seriously,” said the younger Connolly, 23, who enjoyed a quick start in European Trophy play with three goals and eight assists in seven games. “It basically determines the top team in Europe, excluding Russia.”

Buoyed by his European Trophy success, Connolly turned heads quickly in Karlstad. Head coach Lief Carlsson paired him in various combinations with Christian Berglund, Patrik Lundh, Max Gortz and Marcus Paulsson, all of which rendered fairly positive results in his first tastes of the professional game.

“I feel like I’ve acclimated pretty well,” said Connolly. “I think the hockey suits me well. But I’ve still got some things to learn. The game over here issomuch different than the college game. You’ve got to have a really good mind to play well over here. The guys are so smart; so skilled with the puck. They’ll make plays that you don’t really think of – a lot of regroups and circling through the neutral zone – and with the bigger sheet, they’ve got more time and space, so you have to be good positionally. The pace is quick. It’s definitely great hockey.”

But despite the extra space and pace, it’s still a tight game, according to Connolly.

“It’s less grinding than the WCHA, but it’s still pretty defensive,” he said. “They aren’t big, bruising defensemen, but they’re very, very good positionally. You get in the corners and maybe try to spin off a guy, but they’re still right there. And there’s a lot of stick-on-stick so you can’t get shots off.”

In the locker room, Connolly sits beside Chris Lee, a Canadian defenseman and the only other North American player on the squad.

“He’s a great guy,” said Connolly. “He’s played professionally for a little while. It’s nice to have a more experienced guy that has been through pro hockey both in the U.S. and Europe. I’ve bounced a few questions off him, not just hockey questions, but random living things – like getting paid, setting up bank accounts – little details like that and he’s been helpful.”

Connolly also found out – in the most awkward way possible – that he had family nearby.

“On my mom’s side, I’m part Swedish, so the local media decided to dig a little deeper into the ancestry museum archives here. They ended up finding my seventh and eighth cousins, who lived within an hour or two of Karlstad. So they came to the arena and I got to meet them. They had this book on our ancestors in Sweden dating back to the 1400s, which was pretty incredible.”

So far, Connolly’s only real European mishap occurred not in his mingling with foreign culture, but in the relatively familiar surroundings of a hockey arena. He tweaked his groin early in the season and kept playing for a month before finally succumbing to it in late October. After skating in 166 straight games at UMD, a trip to the disabled list was truly foreign for Connolly, but it became a necessity nonetheless. He was back at practice in late November, though, eager for a return to the lineup.

“It was tough to watch the team play and not be able to contribute,” he said. “But we’ve been playing well and there are still a lot of games to play. We’re in a good position.”

Moving through the one-week national team break, Farjestad BK was firmly in the upper half of the 12-team Eliteserien. The top eight teams qualify for the postseason, which plays out in three best-of-seven rounds. The Le Mat Trophy is the ultimate goal – “they’re really serious about winning the gold, which is what they call it over here,” said Connolly – and no team has done it more often than Farjestad BK.

“They take that very seriously,” he said.

So it’s yet another championship pursuit for Connolly, this time on foreign soil, and he’s savoring the experience.

“I’m glad I made the choice to come over here,” he said. “I’m happy to be experiencing it. It took a little time to settle in and for this to start feeling like home, but now that we’re past that, it’s starting to feel good.”

About the author: Jayson Hron is a Minnesota-based freelance writer and hockey historian whose work can also be found on his blog, Historically Inclined.