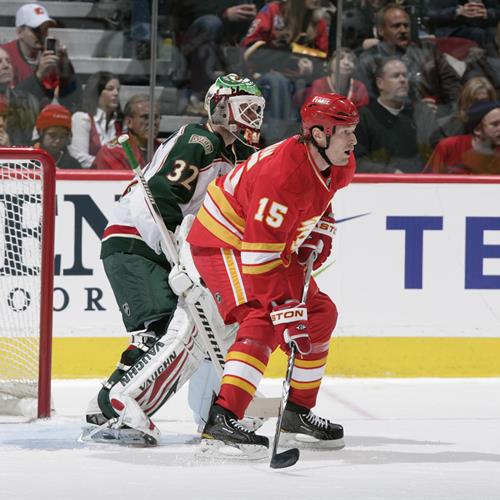 The former Park Center High School and Minnesota State star has played all over during his professional career but has finally settled in with the Flames.

ST. PAUL — There was once a time when Tim Jackman was a top-six guy, counted on for skill, offense and points.

Those days are no more.

When Jackman, who moved to the Twin Cities from Minot, N.D. when he was 10 years old, played high school hockey at Park Center and collegiately at Minnesota State, Jackman was always one of the most skilled players on his team. His last season at Park Center, Jackman scored 34 goals and added 22 assists in just 19 games. As a junior, Jackman scored 22 goals in 22 games.

Even in Mankato, Jackman scored 11 goals as a freshman for the Mavericks. Following that season, the Columbus Blue Jackets made him their second round selection, becoming the first MSU player to ever be drafted by a National Hockey League team.

Jackman played one more year for the Mavericks before turning pro, scoring 14 goals and 28 points as a sophomore. He spent an entire year in the American Hockey League before finally making his NHL debut in 2003, becoming the first Maverick to do that too.

Jackman played 19 games that season for Columbus, but never played another game with the Jackets after that, spending two years in the AHL before being traded to the Phoenix Coyotes.

Traded for the first time in his career, Jackman came to a realization: If he was going to make it as an NHLer, he would have to change his game.

That transformation took time and took place over several organizations. He played eight games with the Coyotes in 2005-06 and was up and down in the AHL with the San Antonio Rampage before being moved again, this time to Los Angeles. He finished that year with the Manchester Monarchs and played five games with the Kings in 2006-07, but played most of that year in the AHL.

It also meant adding an element to his game which he never had before: Fighting. Growing up in Minnesota high school hockey and in the collegiate game, Jackman had never been exposed to that aspect of hockey.

“I grew up that way,” Jackman said. “But all of the sudden, you’re supposed to fight. Obviously it was quite a change and it took awhile to get adjusted.

Learning how to fight when he hadn’t been exposed to it was an interesting process, some of which meant trial by fire.

“There was a lot of guys from Canada and the Western [Hockey] League that had done it that I played with,” Jackman said. “They were always giving me pointers and talking about it. I just had to go out there and do it. It was kind of scary at first, but once it’s over, it’s not so bad and your teammates are patting you on the back.”

Jackman finally earned extensive NHL time with the New York Islanders in 2007-08, playing in a career high 36 games with the big club. He played in 69 games with New York the next season and 54 more in 2009-10 before signing as a free agent in Calgary.

“I was up and down in the minors, traded a couple of times, and played for some different teams,” Jackman said. “A couple years ago I was a free agent and signed with Calgary and just really enjoyed playing here. It’s been a great place for me.”

His first season in Calgary, Jackman played in all 82 games, setting a career high in goals (10), assists (13) and points (23) while also being a plus-4. He played in 75 games last season and has carved out a niche as a bottom-6 guy.

His job isn’t to score anymore, but that doesn’t mean it’s simple.

“Bring energy,” Jackman said. “Be sound defensively, do the little things that help us win games, just try and be responsible all over the ice. Whenever I get an opportunity to play, just try and take advantage of it.”

Jackman is also a leader in the Flames room and has evolved as one of its most popular guys. He signed a new contract extension with Calgary last offseason.

“Jacks is a great guy, a real big team guy and everybody loves him.”

Hartley described Jackman in a way even Jackman couldn’t have possibly expected when he signed his first pro contract over a decade ago.