Sophomore JD Metz coming through in the clutch for Mahtomedi 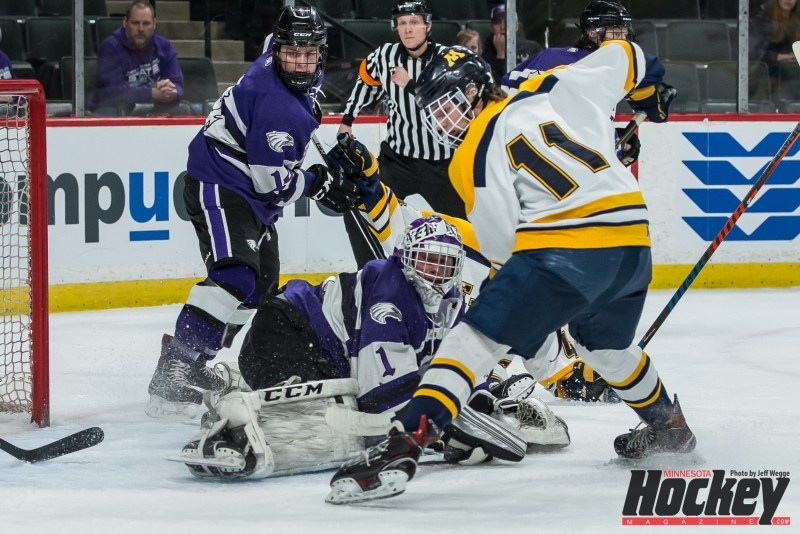 Mahtomedi’s JD Metz in the moment just before putting in the second of his two first-period goals in the Zephyrs 6-0 win over New Ulm in Wednesday night’s Class 1A state quarterfinal in St. Paul. (MHM Photo / Jeff Wegge)

Sophomore JD Metz coming through in the clutch for Mahtomedi

St. Paul — Near the end of  Mahtomedi’s regular season, Zephyrs coach Jeff Poeschl was far from pleased with his team’s offensive production so he made a bold move to give his team the shot in the arm he felt it needed. Poeschl turned to sophomore defenseman JD Metz and asked him to make the in-season conversion from the blue line to forward.

The move paid off and then some for Poeschl and the Zephyrs as Metz has taken off on an impressive run at just the right time. Of Metz’s 10 goals on the season, six have come in his last six games including four in the postseason and two in top-seeded Mahtomedi’s 6-0 state quarterfinal win over New Ulm on Wednesday night.

“In youth hockey I always kind of struggled in playoffs so, in my mind, I was always like once I get to high school in playoffs it’ll be another gear,” Metz said after his biggest postseason performance.

Late in a scoreless first period against New Ulm, Metz sparked and finished a run of three goals in 2:14 with a Tom Paradise goal sandwiched between for a 3-0 Zephyr lead heading into the second period. With 27 first period shots, Mahtomedi (22-6-1) expended nearly half of its 55 shot onslaught in the opening frame.

New Ulm goaltender Jack Raymond had all he could handle in an impressive 49-save performance.

“At the beginning [of the game] I felt really tense, you know the bright lights and everything,” Metz said. “But after I got that first one I really settled down and started to find my game and I thought the whole team did.”

Paradise and his brother, Joe, would each add second period goals before Kory Pilarski capped off the scoring just nine seconds into third period.

Metz picked up an assist in his second game at forward, a 2-1 loss to Stillwater, which turned out to be the first of nine points in eight games (6-3–9) since the move.

“I think that Stillwater game was my first game at forward where a I really felt good with my game and I just felt like I could keep it going.”

Poeschl says the success Metz has had was not unexpected.

“We’ve seen this in him, we just utilized him differently the first 20 games of the season and it’s been a good move for JD and for us here at the end.”