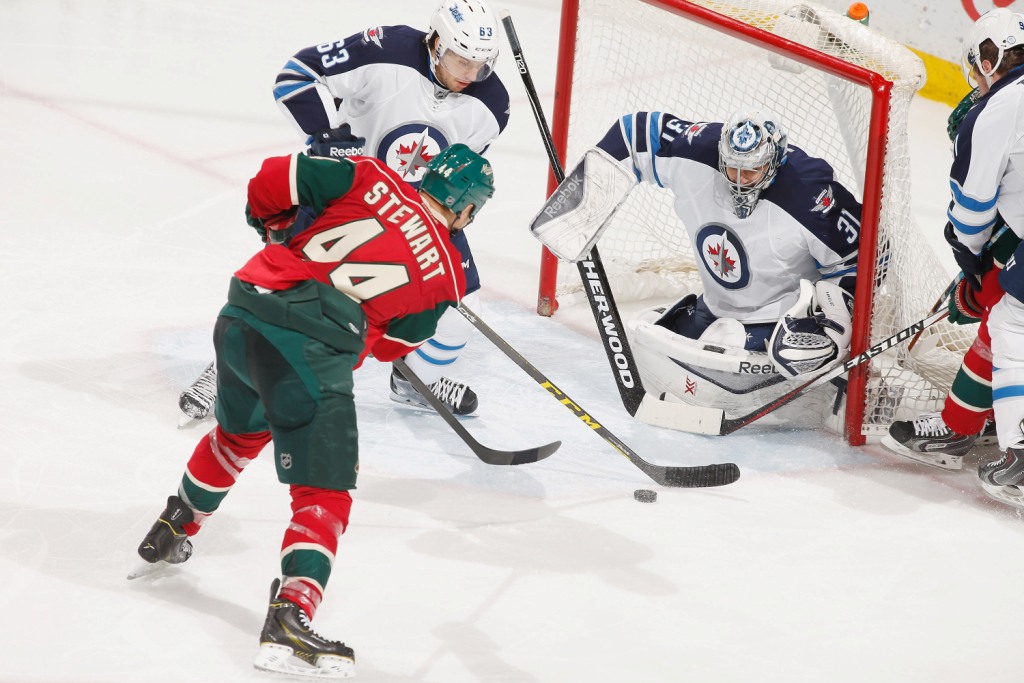 Minnesota’s Chris Stewart is thwarted on this scoring attempt but he wasn’t alone as Winnipeg goaltender Ondrej Pavelec stopped all 32 shots in the Jets’ 2-0 win over the Wild on Monday night at Xcel Energy Center. (Photo by Bruce Kluckhohn/NHLI via Getty Images)

ST. PAUL, MN– Looking to lock up a playoff berth at home, the Minnesota Wild will instead leave St. Paul shut out and trying to shake off the feelings of a three game losing streak for the first time in the Devan Dubnyk era.

The home team was unable to feed off the energy of the home crowd. Coming off close losses at home to New York and Detroit, Minnesota played most of Monday’s game from behind against a desperate Jets team.

Winnipeg goaltender Ondrej Pavelec stopped all 32 shots he faced in a 2-0 road win Monday. Blake Wheeler and Drew Stafford scored for the Jets, which gets a much needed win trying to keep pace with Los Angeles for the Western Conference’s second Wild Card spot.

Minnesota now heads on the road for a three game trip to end the regular season beginning with a nationally televised game against Chicago Tuesday.

“It was a tough, hard-fought game. Give them credit. They made us fight for every inch out there,” Wild coach Mike Yeo said. “We went into the game with a lot of emotion and I don’t know if we controlled it the best way. I felt there was a lot of tension.”

Minnesota is currently in the first Wild Card spot, sitting two points ahead of Winnipeg in the Western Conference. Although the Wild could have earned a playoff berth Monday with a regulation or overtime win, the team remains in position to earn one in the last week of the season.

A third consecutive postseason appearance will now have to be clinched away from Xcel Energy Center, though.

“We have to win. We know that,” Wild forward Thomas Vanek said. ”Sometimes I think this team is better in must-win situations so maybe it’s good for us to get back on the road where we I guess don’t get as pumped up before.

“It’s a tough road trip, but we know what we have to do and it is to win a few games. We’ll start tomorrow.”

Still, the fact that Minnesota is in a position to clinch speaks to how well the team has played since acquiring Dubnyk on Jan. 14. Losing streaks have not existed. Three months after the Wild lost a “must win” game as far as playoff hopes went the last time these two teams played at Xcel Energy Center, it was the Jets who were the ones on the outside of the playoffs.

In that time Minnesota made a 12 point turnaround on the Jets.

That didn’t happen Monday. Plymouth, MN native Blake Wheeler quieted a Wild crowd that for once was able to drown out the Winnipeg fans 4:12 into the game with his 26th goal of the year. With only Chris Stewart in the penalty box following a post-whistle skirmish with Mark Stuart – a call that Wild players were not happy with – the Jets took advantage on the power play.

“I don’t know where that call came from,” Dubnyk said about being shorthanded early. “But they got a lucky bounce and they put a lot of pucks on the net and they did their job.”

Wheeler’s shot went off Marco Scandella’s skate and past Dubnyk, who made 32 saves.

“Of course we’re going to be frustrated. We just lost the game and that had a big impact in the game,” Yeo said. “That said, we have got to make sure we kill those and make sure there’s a lot of hockey after that.

“That play should not have been the difference in the game and obviously it gave them a head start and the opportunity to play a safer, more patient game which made it a little more difficult for us, but it was one play in the game.”

Winnipeg out-shot the Wild 16-9 in the first period, taking advantage of Minnesota turnovers in the defensive zone. Pavelec shined on the other end of the ice. Most notably, the 27 year-old goaltender made a couple point-blank saves on Mikael Granlund.

Stafford made it 2-0 Jets with 6:50 remaining in the second period by shooting a Tyler Myers rebound that ricocheted right to him off Dubnyk back into the net.

Minnesota had chances to get within one. Vanek came closest, hitting the post four minutes into the second period. The Wild also had three power play opportunities it failed to capitalize upon against Pavelec, who earned his third shutout of the season.

While Yeo believes going through a game like tonight is important for his group for experience, the Wild do not have too much time to find its winning ways and be playing at its best.

“I think it’s important to play the right hockey at the right time of the year, which is now. We were there, we were close and we slipped a little bit,” Vanek said. “Now we have to find it again.”