Minnesota State’s Johnny McInnis made the most of a wake-up call. 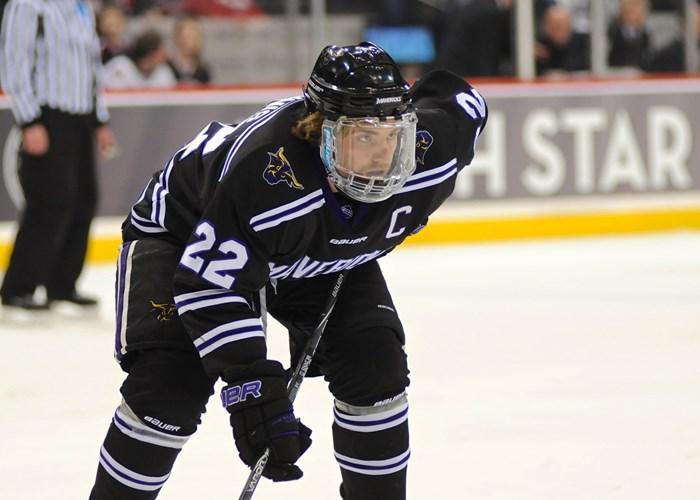 Minnesota State forward Johnny McInnis was at a hockey crossroads.

After a season in which McInnis watched twice as many games from the press box as he did from the bench, he knew something about his game needed to change.

“My first year was a learning experience,” McInnis said. “My expectations were always high for myself. Things didn’t go the way I wanted them to go my freshman year.”

So McInnis spent time on a skating treadmill with MSU assistant coach Darren Blue. After school was out, McInnis returned to the rink where he first learned how to play hockey, Quincy (Mass.) Youth Arena, and got back to the basics. He worked tirelessly on his skating. He developed a better shot. McInnis knew it was the only way to find his way back onto the ice.

“I wasn’t used to not playing,” McInnis said. “I looked at that summer as, this is it, if I want to give it a shot and make a difference in Mankato, that summer was gonna be huge.”

McInnis returned to school in August a different player. He played in 37 games the next season, seeing his offensive production take a big jump, scoring eight goals and seven assists.

Then he was thrown another curveball. After playing for head coach Troy Jutting for two years, the guy who brought him to Mankato from Boston via Okotoks, Alberta, McInnis needed to prove himself to new coach Mike Hastings.

But as well as the coaching change has worked for MSU — the Mavericks have won more games the last two years than they have in any two-year stretch in over 30 years — it’s worked out even better for McInnis.

Hastings is a firm believer that players who work hard will be rewarded for it. McInnis is certainly not afraid of working hard.

“He’s been a blessing, it’s no secret. I think every guy in our locker room can attain to that,” McInnis said of Hastings. “He’s back-boned the whole thing. He really has, I know he’ll never say it, but he’s been the driver for us, making us believe that if we put the time in, we’re going to get rewarded for it and we’re going to get what we deserve.”

As a junior, McInnis took another step, scoring 13 goals and 22 points as the Mavericks made it to the WCHA Final Five and the NCAA Tournament for the first time in a decade.

This season, McInnis was named the team’s captain and led the team with 21 goals. He also chipped in with 16 assists.

“He’s started in the basement,” Hastings said. “When you go to the rink everyday, the guy that has the least amount go stress on him is the guy that knows he’s in the lineup every night. When you have to lift and train and do all the things that are expected of you, and you have a pretty good idea that when you walk in the rink on a Thursday you’re probably not gonna play Friday and Saturday, that’s hard.”

From a team standpoint, the Mavericks are returning to the NCAAs for a second straight season. They won their first ever Final Five championship with a 4-1 win over Ferris State last weekend. McInnis said it’s been all about perspective — one that changed the day Hastings came on board and has continued to evolve in the two years since.

“Just the direction the program was going. It didn’t look like it would even be possible,” McInnis said.

Then last year happened, and showed the Mavericks what was possible if they continued to buy-in. But it took more, and McInnis helped lead the way.

Blasted by Wisconsin in the Final Five last season then shut out by Miami in the first round of the NCAAs, MSU’s triumphant return to the post-season was short-lived. Both McInnis and Hastings said they learned from the experience.

“Last year, I think we were satisfied just to get to the Final Five and the NCAA Tournament because we hadn’t been there in so long,” McInnis said. “This year is different. I think you saw that last weekend. We still have work we want to accomplish this time.”

“We learned that you have to be playing your best hockey in order to advance this time of year,” Hastings said. “Wisconsin showed us that right away.”

Regardless of what happens this weekend, the freshman that once played 14 games has certainly left his mark on the program he had likely never heard of until four years ago.

“I couldn’t be prouder of him, of where he started and where he’s at today,” Hastings said. “The guys really listen to him because they respect him. That at this age is hard to get. He does it on the rink, off the rink, he takes care of our younger guys. He’s shown them a real good way to approach life.”