Not Just Happy To Be Here 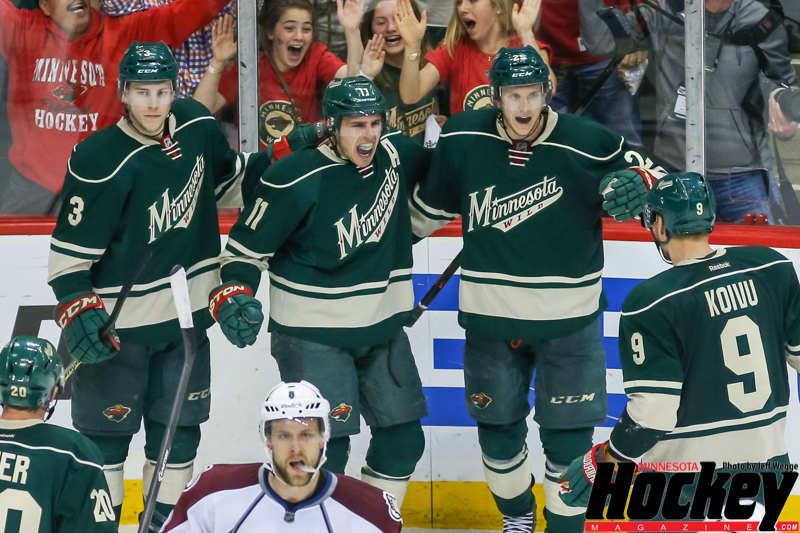 Is it ok to be happy with just making the postseason?

I mean considering all of the bad luck we’ve had with sports teams in this state over the past decade is it acceptable to simply accept a playoff run that doesn’t end in a title. Simply be happy exclaiming, “Hey, at least we made the post season.”

I ask this because I keep hearing it as the Wild continue their great run through the NHL’s post season. “We’re just not used to this,” seems to be the rallying cry from fans, almost as if to accept the inevitability that it’s only a matter of time before this run ends.

So many times we’ve seen the Wild on the brink of destruction over the past two weeks and, just as often, they have come back. Whether it’s been a four-point game for Zach Parise or a thrilling overtime winner by Mikael Granlund the Wild have continued to instill hope in us time and again.

Maybe this is a team of destiny.

Throughout this run I have witnessed a very cool relationship forming between Wild fans and the players. Before the post season I was not a believer in “home ice advantage”, but I have changed my tune.

In each of the home games during the playoffs the fans continue to top themselves. Cheering for the boys and cheering for them louder when they score or even louder when they knew the players are tired. To me, this is SO Minnesota—and what I love about our hockey community. We’d never accept the idea that our cheers can’t make a difference. And fans are right for not thinking that. 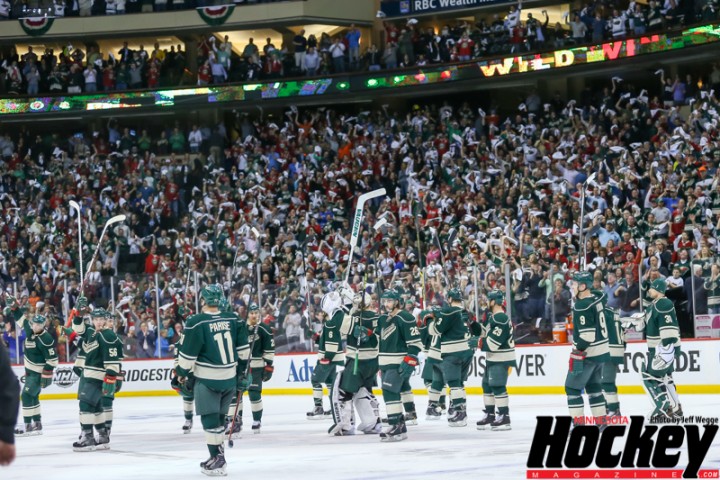 The Wild are undefeated at home (5-0) this postseason and each player I have spoken with has been adamant that the extra cheers from the crowd have helped. Even a guy like Mikko Koivu who just finished his 11th season as a full time Wild player says that these games have been the loudest he’s ever experienced.

The Wild have been exhausted, but the fans keep lifting them up, to will them to please keep this run going a little longer.

We have high aspirations in Minnesota, but low expectations. That is what has made this so exciting. Most outside our state thought the Wild would lose to the Avalanche and those same folks thought the Hawks would run right though the Wild in four games. And while all of the Minnesota fans wanted to disagree with the naysayers we all had some doubt, I mean let’s face it, we haven’t had a huge amount of luck in the post season (outside of the Minnesota Lynx of course).

Still this team continues to give us hope. There’s just something about the make-up of the team that suits us. They are a hard-working, rag-tag bunch that just refuses to believe that they can’t win.

Zach Parise leads this group by example. He is our local pride and joy, and plays like we all wish we could play. Talent-wise, he’s one of the most skilled guys in the league, but he also happens to be one the hardest working players. The same goes for Ryan Suter, whose stoic nature makes you wonder if he’d even flinch after taking a bullet in the arm.

Even the younger players fall into the mold. They aren’t number one draft picks. They are guys that were take later in round one, later in the draft or in the case of many – not at all. Take for example the game winning goal against Chicago in Game 3. Justin Fontaine (undrafted) makes a great pass to former Gopher Erik Haula (seventh rounder) who tips it past Corey Crawford for the goal.

Then there is a guy like Nino Niederreiter who became the biggest hockey hero the state has seen since Andrew Brunette. He was a cast off of the New York Islanders before resurrecting his young career here in Minnesota. Or coach Mike Yeo who, in his first NHL head coaching gig, has deflected the criticism and continued to coach his way.

I don’t know how much longer this post season will go on, but you can’t help but enjoy it and root for Minnesota. We may be conditioned to expect the end is near, but maybe for once it’s not. I’m not saying they’ll win the Stanley Cup this season but, with the combination of leadership, youth and hard work, I do believe that this team has a fighting chance.