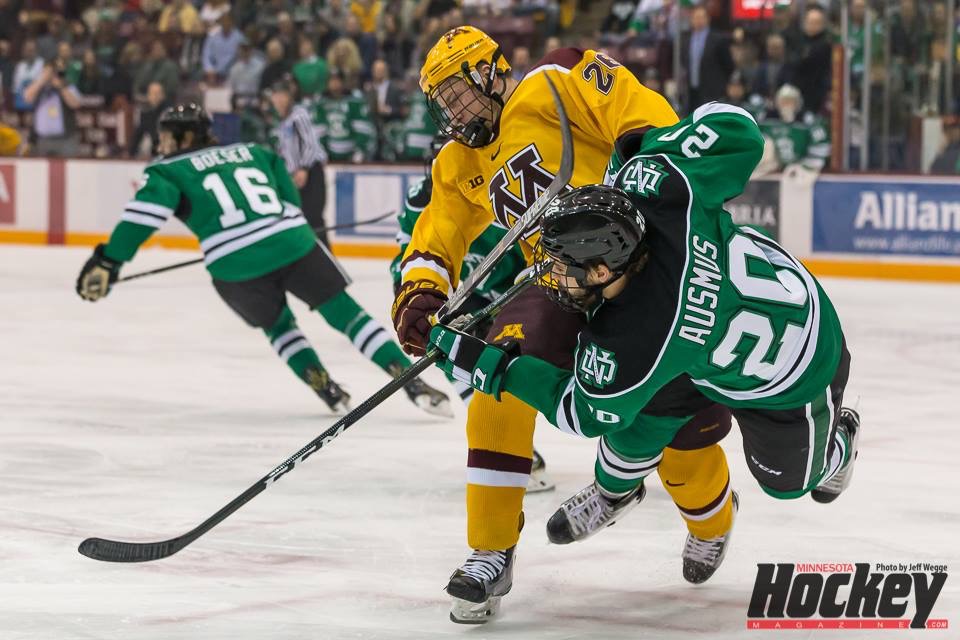 It’s highly doubtful that another series on Minnesota’s schedule was circled, highlighted or anticipated more than a visit from North Dakota in the first weekend in November.

No matchup moves the meter more for either team’s following, historically, and add in the fact that the Gophers and Fighting Hawks haven’t been on one another’s schedule since 2013, the last season both teams were members of the WCHA.

But conference realignment, a term that became profane for the die-hards of many college hockey fans in the west, moved Minnesota and UND to the newly-formed Big Ten and National Collegiate Hockey Conferences, respectively.

Minnesota and UND collided, by chance, in the 2014 Frozen Four where the Gophers won on a goal with less than a second remaining in the third period of a tie game.

But the first three seasons of college hockey’s ‘new world’ went by without a scheduled game between the schools and the fans were ready.

But would the excitement for the rivalry find its way from each fan base to the players, most of whom had never tasted the rivalry?

“The players understand,” Minnesota coach Don Lucia said. “I made the comment, ‘just YouTube it.’ There’s plenty of action there. You can find whatever you want.

“There was an early scrum and you knew, ‘we’re back.’”

Well, it only took a little more than two minutes for the first coincidental roughing penalties. Four minutes later, UND captain Gage Ausmus and Minnesota’s Ryan Lindgren engaged in a one-on-one tangle away from the play near the boards that resulted in double roughing minors and 10-minute misconducts for each player

“No one here has really experienced the rivalry firsthand,” Ausmus said after Friday’s game.

“But we’re all aware of the history and tradition of this series, what the teams bring to the table and how the games end up.

“We talked about it during the week, how intense this series was going to be and how it’s one of the biggest of the year for us.”

“We had the chance to schedule Boston College and Northeastern or we could wait around and see what would happen (with the UND nickname),” Lucia said in a Jan. 2013 radio interview. “How long was that going to take? That had gone on for years and there was no end in sight. We don’t have a lot of room on the schedule.”

Friday’s reunion game had everything except for a lead change, but every time the Fighting Hawks broke the tie, the Gophers answered the call. 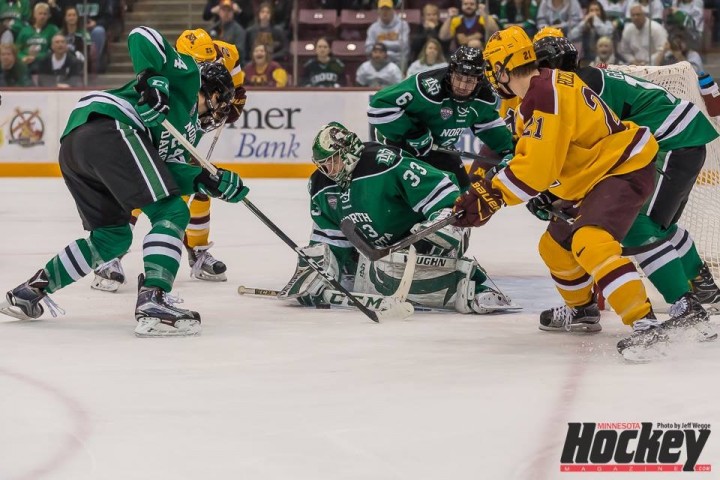 Tucker Poolman, one of four East Grand Forks natives on UND’s roster, seemingly plugged the game-winning goal with 1:59 left in the third period, but Tommy Novak’s second goal of the game tied it 5-5 and that’s how it ended.

It was very similar to the final regularly-scheduled Minnesota-UND game of the WCHA rivalry in Jan. 2013 at Mariucci that saw the Gophers battle back from a two-goal deficit in the third period and Nate Condon tie the game late in the third. That also ended with a tie.

Minnesota skated away from the weekend on top with a 2-0 win on the back of goaltender Eric Schierhorn’s 33 saves.

The bi-partisan crowd made plenty of noise as expected, but surprising was the amount of empty seats throughout Friday’s game. Fans trickled in slowly after puck drop but the golden ‘M’ on each side was still visible all game and Friday’s announced attendance was 61 short of the 10,000-person capacity.

Perhaps it a lot to do with the fact that standing-room tickets were sold for $49 and if you wanted a set, you had to pay at least $80 on up to $115. Judging by the amount of green in the arena bowl, North Dakota fans are more willing to pay a higher price to see their team play.

“I think it has something to do with the team not being as good as it used to be and the ticket prices,” said Scott Thorsen, North St. Paul, whose family has had Gophers season tickets since 1986 when Minnesota played across the street in the old Mariucci.

“I’m frustrated too. A lot of people give their tickets away or let them burn. There’s no way that happens at UND.”

Thorsen, donning a vintage Gophers jersey, was at Friday’s game with his childhood friend Andrew Schmitt of Eagan, who wore a UND jersey with “Sioux” spelled across the chest.

“The atmosphere is great. It’s absolutely expected, but I was kind of taken aback by all of the empty seats,” Schmitt said.  But it’s such a good rivalry, it’s always going to be a good game.”

The resurrection of Minnesota’s rivalry with UND was a need that’s thankfully been fulfilled, because fans need things to remain engaged with in their team and the sport. Hatred-filled rivalries certainly help with that.

“It’s elite players making plays and that makes the rivalry what it is,” Lucia said. “The games are usually hard fought. Someone might win, but there’s usually a bounce-back and that’s what the fans love about it.”

News broke in July that the series is here to stay for the next six seasons. A weekend series to be played next season in Grand Forks was already known, but the schools announced they will face off in the 2018 Hall of Fame Game in Las Vegas. That’s in addition to a four-year agreement to play one series each season starting in 2019-20, alternating campuses each year.

“I don’t think it really matters that we haven’t played (North Dakota) in a while,” Novak said Friday. “It’s historic. We all grew up watching it.”