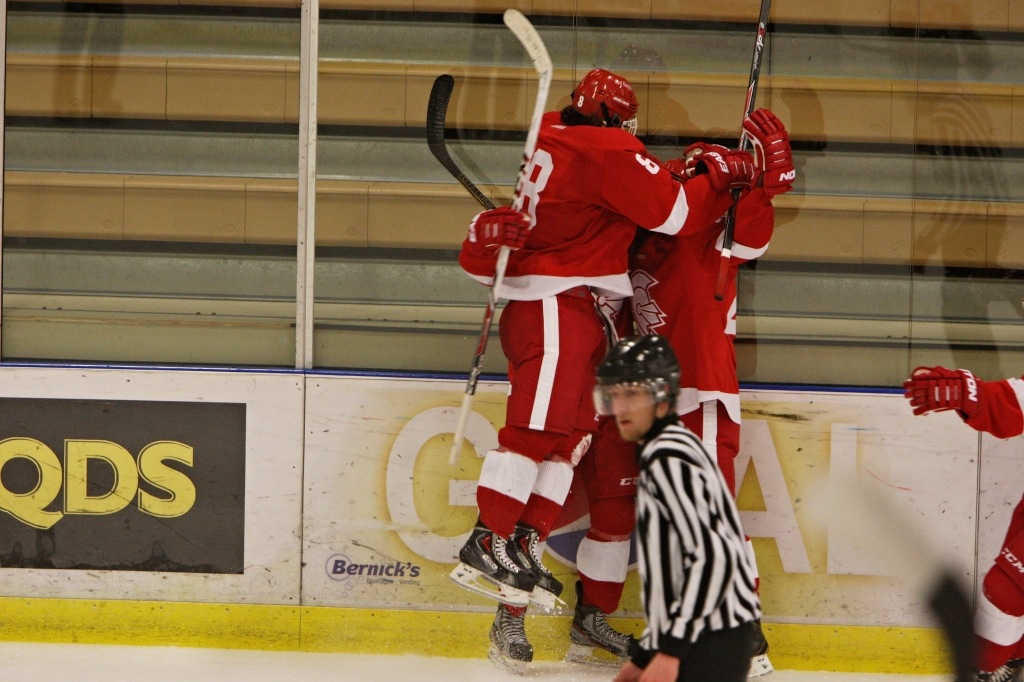 Burnsville, MN – Mark Kaske delivered his first career hat trick to spark the Benilde-St. Margaret’s Red Knights to a tense 5-4 win over the Burnsville Blaze.  Kaske’s third goal proved to be the game winner at 5:14 of the third period.  His goal gave the Red Knights a two goal lead at 5-3.

As was the case all night long, the Blaze did not go a way as Will Missling responded with a goal just 1:19 later to set up a tense finish.  Red Knight goalie Jalen Long turned aside several Blaze chances in the third period and was challenged the entire period with close in chances.

“With the graduation of last year’s ‘rock stars’, we are forging a new identity,” Red Knight coach Ken Pauly said.  “I think that’s bringing the guys close together. Jalen continues to play stronger the longer and tighter the game goes. This one could have rolled away from us without Jalen standing tall.”

Both teams boast power plays hovering over 40% and that factored into the game.  After Chase Jungels opened the scoring with his 4th goal of the season, Jack Ahcan evened the score at a goal apiece 10 minutes later with the man advantage for the Blaze.

Kaske’s offensive output this year (4g-5a-9pts) is a welcome sign for the Red Knights and will help them push through the tough games.  “Kaske is an energy guy and he never makes a mistake for lack of hustle,” Pauly said of his junior forward.  “The flood gates opened for him tonight and we believe that is a great, great sign for our team. He has all of the tools to be a high end player.”

That set up the Wild third period period that featured a style of play that kept the pace, the physical game picked up and the chances were plentiful for both teams.  The Blaze (1-3-0, 1-1-0) left the game with a quality character test while the Red Knights (4-0-0) turned aside their stiffest challenge of the season and were gritty when needed, especially in the defensive zone.

“It was our first true AA test and you really felt the energy on the bench from the drop of the puck,”  Pauly said.  “Burnsville is a quality program and they play very well in their rink. Our tone on the bench was good, but the team was frustrated because we had chances to pull away and circumstances prevented that tonight.”

Leading the way in the grit category all night long was the play of Jungels and Evan Fleming.  They responded to the challenge put forth to the team and led by example.  “I am very happy with Jungles and Fleming tonight,” Pauly said after the game.  “We challenged the guys to be a little grittier tonight. It was especially nice to see Chase bring some physical play to his game. He’s stronger than many people realize.”

Regarding the Blaze, the Red Knight skipper left impressed with their effort and stated, “From what I saw of Burnsville tonight, I believe we may be asking ourselves ‘what could have been’ if their two star players (Tyler Sheey and Teemu Kivihalme)would have finished there. That could be a top 5 team easily.  They are  tough, disciplined, and they play with a purpose. There is no quit in them. Who knows? they may be better than a lot of people think by season’s end. Boesser and Ahcan gave us fits all night. They wouldn’t go a way and we were fortunate to win tonight.”

The Red Knights face another team that won’t most likely go away and another solid AA team in the Hill-Murray Pioneers Saturday evening at Aldrich Arena.  The Blaze welcome the Wayzata Trojans to Burnsville on Saturday for a 7pm face-off.