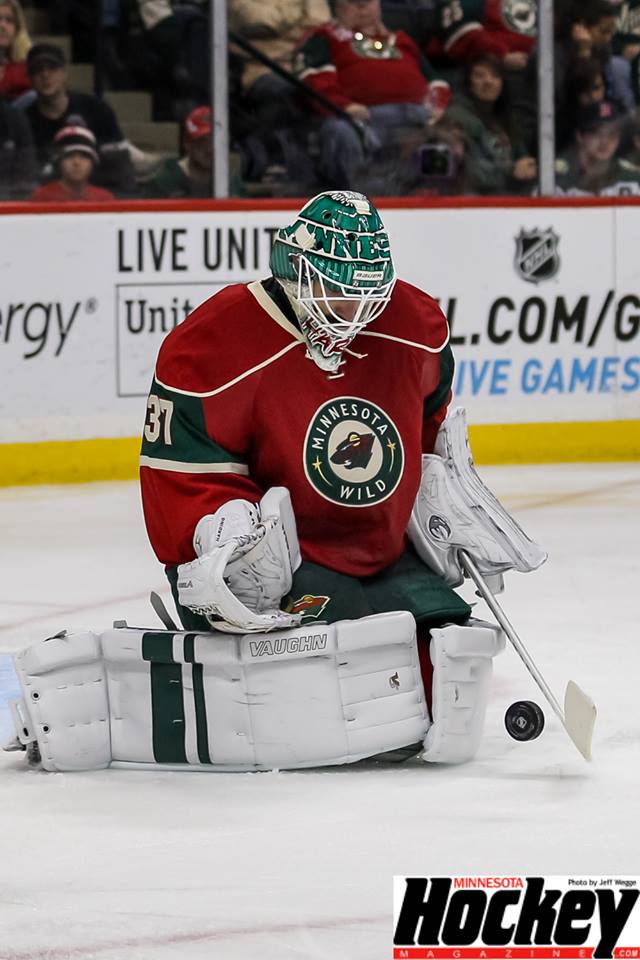 The Minnesota Wild gritted out a 4-0 win over the New Jersey Devils Sunday night at the Xcel Energy Center before 17,571 spectators and claimed third place in the Central Division.

The win is Minnesota’s fifth in six games and underscores that playing well might be fine, but in the cluttered Western Conference, they will be required to be even better as it appears the margin of error for a playoff berth will be slim.

After surviving an energized Devils team in the first period, it was the Wild who owned the 1-0 lead over the goal-starved New Jersey club who haven’t scored a goal in 149:05 of play.  After being outshot 10-8 in the first period, the Wild relied on goaltender Josh Harding to put them in position to find their game.  He faced three Devils power plays in the first stanza and held New Jersey at bay.  Harding was asked to make just nine more saves over the final two periods to pick up the shutout.

Deflecting praise, Harding credited his penalty killers in making his job easier in the first period.  “The killers were doing pretty much everything right getting the puck down, getting in the lanes,” Harding said.  “That was probably the story early on, the guys battled hard after that and we got to our game.”

Harding leads the NHL with a 1.11 goals against average and .950 save percentage.  He upped his record to 7-2-1 this season and carries a league leading 6-0-0 record at home.  This season, no other goaltender has earned more than three victories on home ice without picking up a loss.  He is a remarkable 21-4-1 at the Xcel Energy Center since Jan. 27, 2010.

“The guys are making it easy,” Harding said of his success.  “It’s never about one player. We win as a team, we lose as team we always say and this is another team win.”

Nino Niederreiter also had an assist on the Granlund’s goal and finished the game with three helpers for Minnesota and that marked his first multi-point game of his career.  He now has (3g-6a-9pts) in 15 games this season which is six more than he brought to Minnesota (2g-1a-3pts) in 64 career games with the New York Islanders.  Niederreiter is also in the midst of his first career point-streak with four points (1g-3a-4pts) over the last two contests.

Torrey Mitchell added a greasy goal to the ledger as he scored off a rebound allowed by Devils goalie Cory Schneider.  The shot originated from former Devil Zach Parise who was facing his former club for the first time.

“As a player, you always hate practicing and scrimmaging against your own team,” Parise said. “That’s what it felt like for me the whole game.  They don’t give you much, they play well systematically, there is not a lot of room out there. Fortunately, we were pretty opportunistic; when we did have the chances, we put them in.”

Harding pointed to the entire team effort that included nine different players picking up points Sunday night.  “Everyone contributed, pulled their weight and, more than anything, it’s good to show Zach (Parise) that everybody put in a good effort for what he has all done for this club. It was a good win for us and for him,” Harding said.

In the third period, Dany Heatley scored off a deflection for his second goal of the season and Pominville added an empty net goal for his 10th of the season.  Despite winning five of the last six games, the Wild have to maintain that effort as the Western Conference continues to keep pace with each other.

Nine of the top 13 teams in the NHL reside in the Western Conference and they hold a stunning  44-13-6 record against Eastern Conference teams.  Eventually, the West will focus on the West.  Divisional and conference games will have even more meaning as teams position for the post season, even now.  One such game for the Wild is on deck as the Pacific Division’s Calgary Flames invade St. Paul on Tuesday night.