Despite losses, fans not deserting Wild 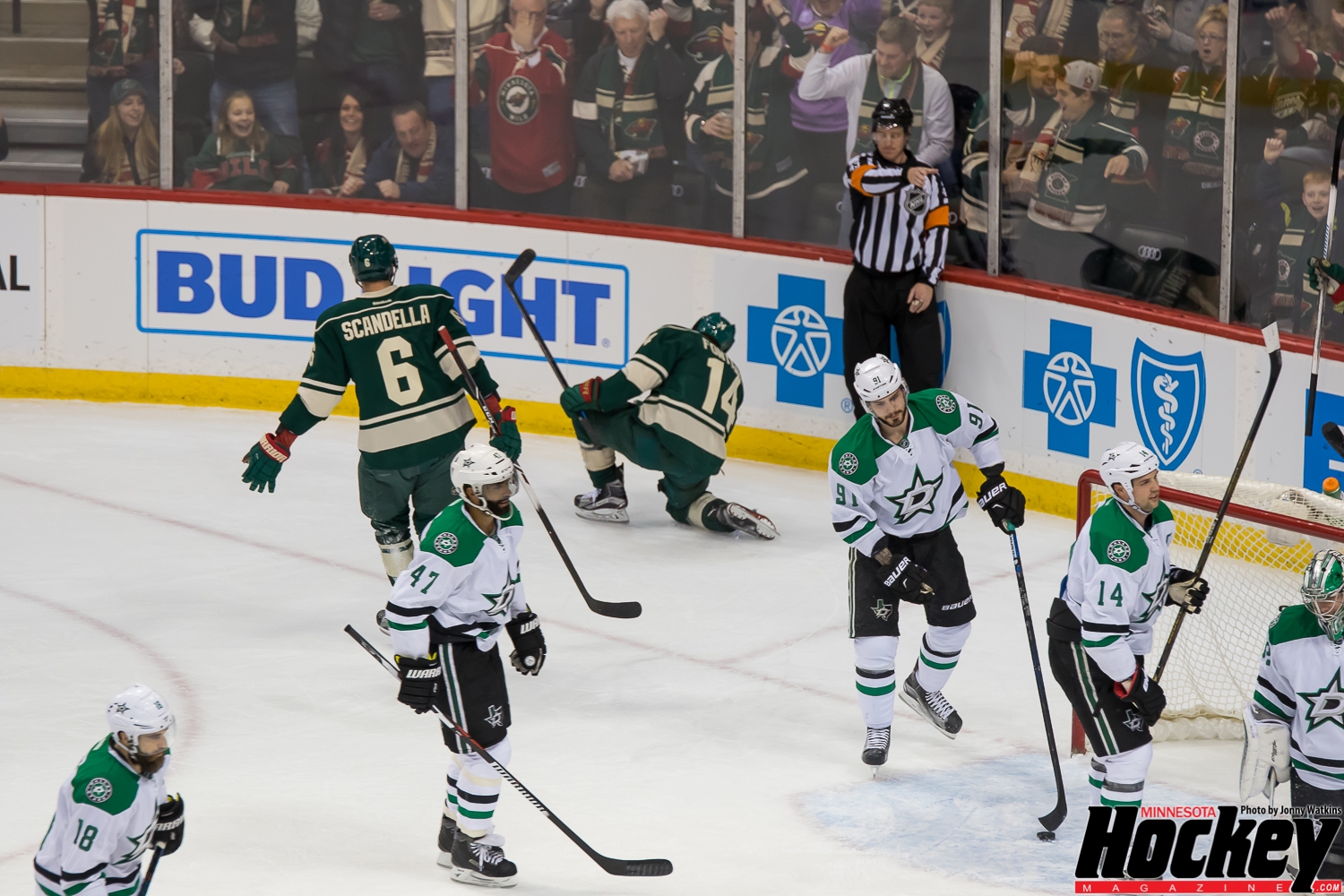 Wild fans and Justin Fontaine celebrate the Wild forward’s first-period goal putting Minnesota up 2-1 over Dallas on Tuesday night at Xcel Energy Center. The Stars would eventually come back to win the game 4-3 in overtime. (MHM Photo / Jonny Watkins)

Despite losses, fans not deserting Wild

St. Paul – There were no bomb threats at the Xcel Energy Center Tuesday. Nor were any tomatoes tossed.

Wild fans are hanging in there.

Another standing-room-only crowd of 19,087 could have turned unruly after the Dallas Stars outshot Minnesota 13-9 and scored two unanswered goals to grab a 3-2 lead in the second period, but instead offered applause and even a few cheers when the home team produced a slight flurry before leaving the ice.

Prodded by a 12-0 difference in shots on goal at the start and the tying goal by the Wild in the third period, the fans even came together midway through the period with resounding cheers of “Let’s go, Wild!”

One goal, Mikko Koivu’s power-play tally early in the third period, was all Minnesota could manage over the 20-minute session, however, and the Stars got an overtime goal from John Klingberg to saunter out of the X with a 4-3 overtime win.

Negatives, Yeo pointed out, are permeating the atmosphere around his team. He prefers to pick out the positives, he said.

One was the early play of the Thomas Vanek-Erik Haula-Justin Fontaine line.

Vanek, who notched two assists but whose turnover led to Klingberg’s winning goal, said one point is a whole lot better than zero, but added, “We felt like this was going to be a comeback win, but we couldn’t get it done.”

Noted Koivu: “We’ve got to play a good 60 or 65 minutes, whatever it takes, to win a hockey game in this league, and we’re not able to do that right now.”

Haula, who had a goal and an assist, noted that people keep saying how hard it is for a team to pull out of a slump, and “it really is,” he said. “It wasn’t enough again. We weren’t good enough to win the game.”

Yeo ducked no questions after the game, explaining to the media that no one has a magic cure for his team’s decline.

“It’s very easy right now to find negatives,” he added, “but nothing easy is going to get us out of this.”

Even though the Wild dominated play for much of the third period, outshooting Dallas 17-4, the strong finish served as little solace for Koivu.

“We can talk about those things over and over,” he said. “We didn’t do it and we lose the hockey game. … There’s no shortcuts. There’s not one thing we need to be doing better or whatever. We’ve got to play better to win a hockey game.”

The Wild outshot St. Louis 39-24 in a 4-1 defeat Feb. 6, so at least puck possession has improved over Minnesota’s past two games.

“Not a lot of people,” he said, “are feeling good offensively.”

If it’s tough in the room, it’s sometimes even tougher outside the room, where at least one bombshell exploded in the world of social media Tuesday night.

Zenon Konopka, who runs a winery and played 73 games at forward for Minnesota in 2012-14 before Buffalo acquired him on waivers, weighed in via Twitter after the nationally televised game.

“The Minnesota Wild have so much talent,” Konopka tweeted. “All the pieces to be Stanley Cup champs – wasting years isn’t fair to the players or fans.”

Some fans on social media undoubtedly agree, but the crowds continue coming to the X. Tuesday’s game was the 26th home sellout out of 26 games this season; the Wild are averaging more than 19,000 per home game.

And none of them – at least Tuesday night – was heard booing.