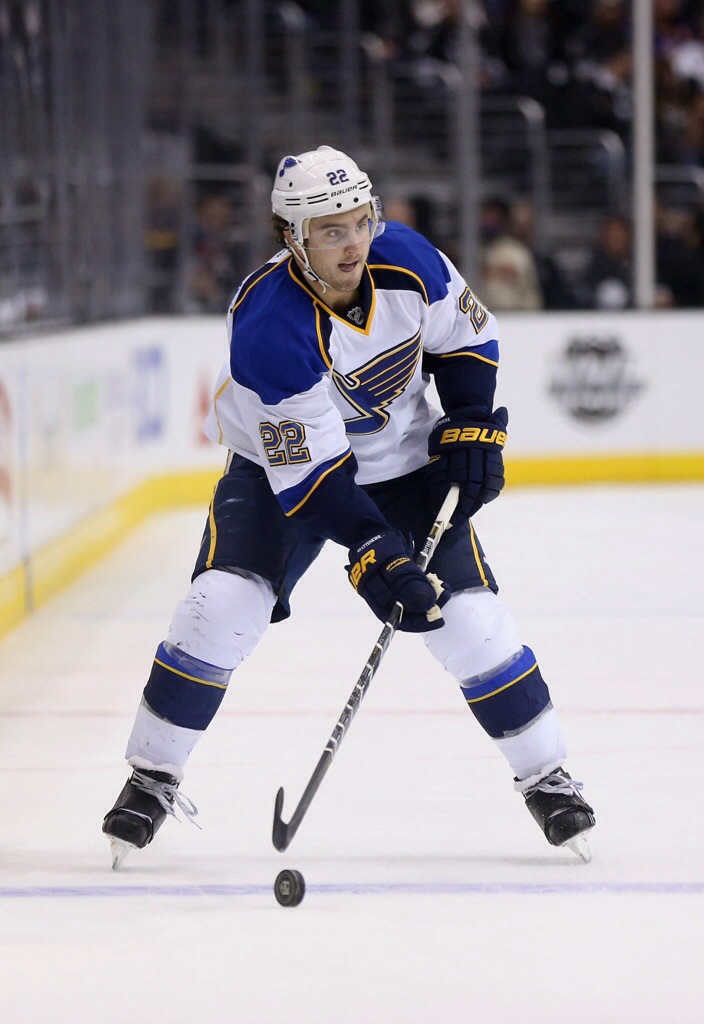 With all of the buzz around the IIHF World Juniors competition, outdoor hockey games and an NHL season that is quickly heating up as temperatures continue to fall, tonight’s “Know Your Enemy” was carefully selected for his ability to share experiences and thoughts that tie into  all three. While he may be feeling the Minnesota chill due to leaving his jacket at home in St. Louis (true story), he remained upbeat while sharing warm hockey memories following morning skate at the Xcel Energy Center. Grab something hot to drink and a warm blanket to curl up in while we cozy up to, and get to know tonight’s enemy, St. Louis Blues defenseman, Kevin Shattenkirk Q&A style.

You are a US born player and spent time with the US National Team Development Program. How important was that to your development as pro?

For me going to Ann Arbor and the program was really important. I was a very raw player and needed a lot of work and I think they saw that as well; to have those kinds of resources as a 16-year old is amazing because you play against older players and it really develops your game. There’s a fine line between developing your game and playing to win and the coaches and the whole staff did a great job of it. I think ultimately my two coaches there and some of the support staff were tremendous in helping me develop and get ready for college and ultimately the next level, here [the NHL].

What is it like for you watching younger players coming through the program now that you are in the NHL?

It’s cool. I think me being a part of it and seeing older guys who went through it and now these young guys…you always remember your experiences there and playing in the World Juniors and the World 18s and it’s just an exciting feeling. You’re always excited to play for your country but as you get up and go through the ranks it’s harder and harder to get that opportunity. I know how special it is for these guys to have this opportunity and they are obviously doing great right now so it’s fun to watch, especially with a couple Canadian guys in the locker room!

There’s some bets going and we’ll see what happens!

You went from the program to Boston University. How did playing college puck influence your game?

I’m from the Northeast and I grew up watching college hockey so that was my goal. I think for many kids in Canada the goal is often to play in major juniors. Going the college route was very important to me but it’s not an allotted plan for everyone; we all take different routes to get here and for me getting to college was that path. I think BU in particular was important for me because of the coaches and knowing that’s where I would develop best. To be able to have Coach Parker who was very hard on me but in the right ways was really important. Their new Coach David Quinn who was our assistant and defensive coach there took a lot of time to make sure we developed in the right way and I think it was important to do that and I wasn’t rushed out of college either which was also nice.

Do you have any favorite “Winter Classic” style events from your hockey career?

At school we got to play BC at Fenway Park so that’s probably my greatest outdoor game experience. Playing at Fenway in front of 45,000 people was amazing! We got to do that and we won and had a nice little celebration after and it was just a really, really fun night and something that we’ll get to remember for a long time.

Would you like to play in a Winter Classic one day?

I would love to! I think it would be great for us and for the team. It brings a lot of excitement to the game which is important too. Hopefully, we’re crossing our fingers, that St. Louis will get a game sooner or later.

What are your personal feelings on the season so far?

The season so far has been great. It’s nice to start the season on time and go through training camp with all of the guys to get back in the swing of things. I think we have a pretty special team here and we were very excited coming into the season. I think we’ve met our expectations and it’s just been good to not have to go through all of that hoopla and the meetings and such like last year.

You have been stepping up and really contributing to some big wins for your team this season including a game winning shootout goal over the Blackhawks just the other night. How does that make you feel?

It’s great when you get to fill a big role for your team. I think everyone always hopes to be someone who contributes in a game for their team and when you get the opportunity it’s time to step up and for me it was a great night. It’s always a good feeling to come into the locker room knowing you had a piece of the win and the guys are congratulating you; it’s a very fulfilling type of feeling.

Obviously you guys have already travelled to a lot of cities this winter but what do you think of this Minnesota deep freeze you arrived in yesterday?

Unfortunately I left my coat at home so it wasn’t a great night for me last night! It’s been pretty crazy this season, we’ve been to some cold cities so far but I think Minnesota has taken the cake!

You can follow Kevin Shattenkirk on Twitter @Shattdeuces as well as the author of this article @AmySnow17!

Featured Image:
Kevin Shattenkirk surveys the ice during his two-point night (1-1–2) in the Blues’ 3-2 loss to the Kings on Dec. 2, 2013 in Los Angeles.
(Getty Images/Jeff Gross)