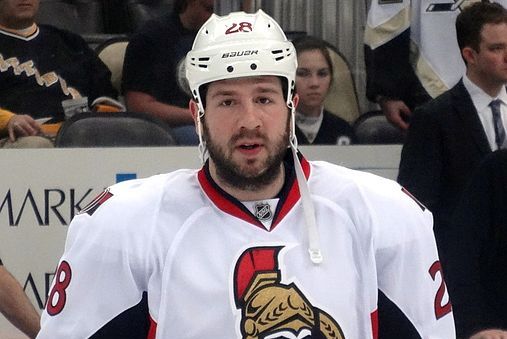 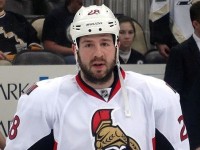 Featured Image:
Ottawa Senators forward Matt Kassian during game two of their second round series against the Pittsburgh Penguins, May 17, 2013 at Consol Energy Center in Pittsburgh, PA.
(Photo: Michael Miller/Pens Through My Lens)

In the summer of  2012 Matt Kassian was on the Wild Road Tour in Minnesota when it was announced that he had signed a new two-year deal with the Minnesota Wild. By March of the following year the honeymoon was over, however, and Kassian was traded to the Ottawa Senators. With the Sens in town Kassian seemed like an ideal candidate for our “Know Your Frenemy/Enemy” series!

The Senators have slowly been building up a huge roster, literally in terms of size, and Kassian was a perfect fit for the towering team from Canada. To give a quick comparison there are only two players on the Ottawa Senators roster right now who fall below six feet tall while the Wild have nine currently listed. We spoke to Kassian during the Senators visit to the Xcel Energy Center today and what we got, was a great Q&A with the humorous gentle giant, that is Matt Kassian.

Q: Do you feel like you’ve evolved as a player since being traded to the Senators and leaving the club you were with for so long?

A: I haven’t reinvented myself as a player or tried to reinvent myself as a player because that would not be very smart, but it’s about opportunity and there wasn’t a lot here in Minnesota for me and in the end I was sent elsewhere to get that opportunity. Ottawa has been great, it’s been a lot of fun up there and I do think I’ve improved and I want to keep improving. I do feel like I’ve been better, which comes with having the opportunity to get out there and play and work on everything.

Q: How have you adjusted to the playing environment in Canada?

A: The culture of hockey in Canada is a bit different, not that it’s not good here in Minnesota because it is, but Canada is just on another level as far as hockey goes. It wasn’t difficult to adjust though, there are great fans there just like there are here. I loved my time here and it was a great place to play and Ottawa is the same. I don’t have any complaints or worries about my time there or here.

Q: How do you feel about the dressing room you call home now as a Senator?

It’s a good group. That Methot guy, he’s a bit of a different bird, I don’t know about him he sketches me out a little bit but it’s a pretty fun group. [Methot had no comment on Kassian’s chirps although it was obvious the two players are great friends who consistently jest one another all in good fun!] It was really easy for me to come in and fit in with these guys. I didn’t have to test the waters to see if I was accepted with my sense of humor and my slight awkwardness [laughs]. It’s even been easy with the guys who have come in since I’ve been there, like Bobby Ryan who was tweeting pictures of pigeons of me before I even met him, so it’s a good group, a fun group, and a group who likes playing with each other and for each other and I think that’s really important. 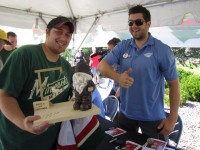 Kassian poses with a fan during the MN Wild Road Tour 2012. The fan gifted Matt with a great Gnome/Rooster war statue in honor of a long standing inside joke from Kassian’s twitter.

Q: Is it strange coming back to Minnesota?

It’s a little weird. It’s a little different seeing all of the places you’ve been before and seeing the people you’ve seen before from the security guards to the guys at the doors and gates…when you’ve been around a place for awhile you still know them all, so it’s good to see everybody and fun to be back.

Q: Do you have any former teammates or things you particularly miss?

You miss guys and good friends. Scandella is one of my closer friends so it’s good seeing him, we got a chance to go to dinner last night and sit down together so that was nice. I mean you’re going to see guys, I saw Brodziak a bunch this summer and Spurgeon, but it is what it is. It’s part of the businesses and they know it just like I do that even if you get traded you’re going to be seeing those guys around because it’s a small world and for me it’s right now and it’s going to be fun and I’m excited for it.

As the lights fell dim over the Xcel Energy Center ice, Matt Kassian took to his twitter account as he often does and tweeted, “After much deliberation I have decided that winning on the road is fun…” The 3-0 win was not the first for the Sens this road trip, but it certainly was a night Matt Kassian probably won’t be forgetting anytime soon.

You can follow Matt on twitter at @Kassassination as well as the author of this article @AmySnow17! Be sure to check out @MNhockeymag as well for all of our latest updates, articles and events!