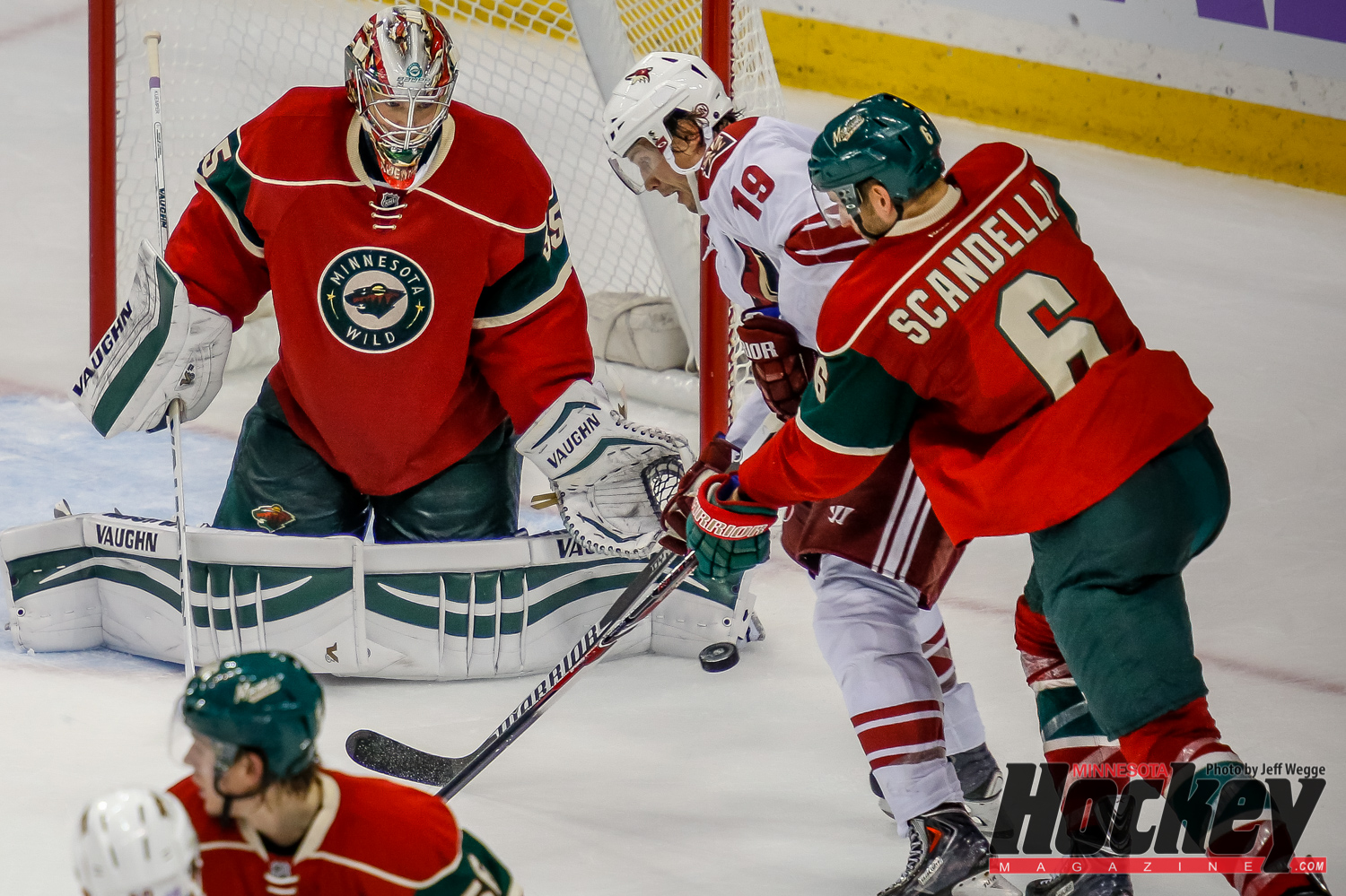 Minnesota goaltender Darcy Kuemper with one of his 26 saves in the Wild’s shutout victory over the Coyotes on Thursday. (MHM Photo / Jeff Wegge)

It wasn’t pretty, especially early, but the Minnesota Wild shook off the rust to halt its losing streak at two. Playing just its fifth game in 15 days the Wild overcame a slow start to net a pair of second period goals which proved to be more than enough for red-hot goaltender Darcy Kuemper who shut out the visiting Arizona (don’t-call-us-Phoenix) Coyotes 2-0 on Thursday night at Xcel Energy Center.

Kuemper turned aside all 26 Arizona shots he faced to earn his league-leading third shutout of the season while defenseman Jared Spurgeon sparked the offense with assists on goals by Charlie Coyle and Jason Pominville.

The Wild needed Kuemper to be good, particularly in a first period when Minnesota’s turnovers and defensive breakdowns led to the Coyotes’ most serious threats of the night. The effects of the extensive downtime between games were evident.

“You can just tell, we’re not quite there right now,” Wild coach Mike Yeo said of his team’s sluggish start. “Just execution, I thought we were very reactive in the first period where usually we’re a team that’s dictating the pace.”

“At the start of the game it was kind of a little sloppy,” Pominville said. “You could tell that we hadn’t played in a little while.”

After nearly missing the start of training camp in a contract dispute, Kuemper has been Minnesota’s best player through the season’s first two weeks. Kuemper, who picked up his third shutout in his last six home starts dating back to last season, now sits at 3-1-0 this season with a 0.50 GAA and a .980 SV%.

“What I really liked is just how he’s following the play,” Yeo said of his goaltender. “That’s a team (Arizona) that does a great job with their net-front presence and also getting pucks in from the blue line with a lot of bodies in front.

“I thought he was making himself big in those instances.”

Having survived the rough opening period, Minnesota came out of the gate in the second with noticeably more energy and it paid off early with two goals in less than three minutes beginning with Coyle’s slick deflection of a Spurgeon shot at 2:53. The goal is the second of the season for Coyle who signed a 5-year, $16 million contract extension on Wednesday.

Pominville notched his second of the year at 5:27 with a blast that Coyotes’ goaltender Mike Smith said hit one of his defensemen on its way in. Smith finished with 27 saves on 29 Minnesota shots.

The Wild had ample opportunity to extend its lead when Arizona was called for three penalties in the second half of the middle stanza. But Minnesota’s well-documented power-play woes this season continued to the tune of 0 for 3 on the night and a total of three shots on goal.

Yeo acknowledged the team’s frustration with the power play, which is now 0 for 19 through five games, but said it’s up to him to find the right combinations. He added his players deserve credit for not allowing their power-play frustrations affect their next shift.

“That’s not always easy to push that aside but they’re focused on the bigger goal and that’s winning the hockey game,” Yeo said. “But there’s no question that I have to figure that out. Once we do, we’ll be a pretty dangerous team.”

The Arizona game began a stretch of six games in nine days for Minnesota which hosts the Tampa Bay Lightning on Saturday night at Xcel Energy Center. It’s a workload both players and staff are looking forward to.

“It was good to win that game; we did a lot of good things,” Yeo said. “But getting these games is going to be really important for us just to get up to game speed.”

“It’ll be nice here to play more games, get into a little bit more of a rhythm,” Pominville said. “A lot of time off is fun to rest the body but we want to play. Practice is fun, but not that fun.”