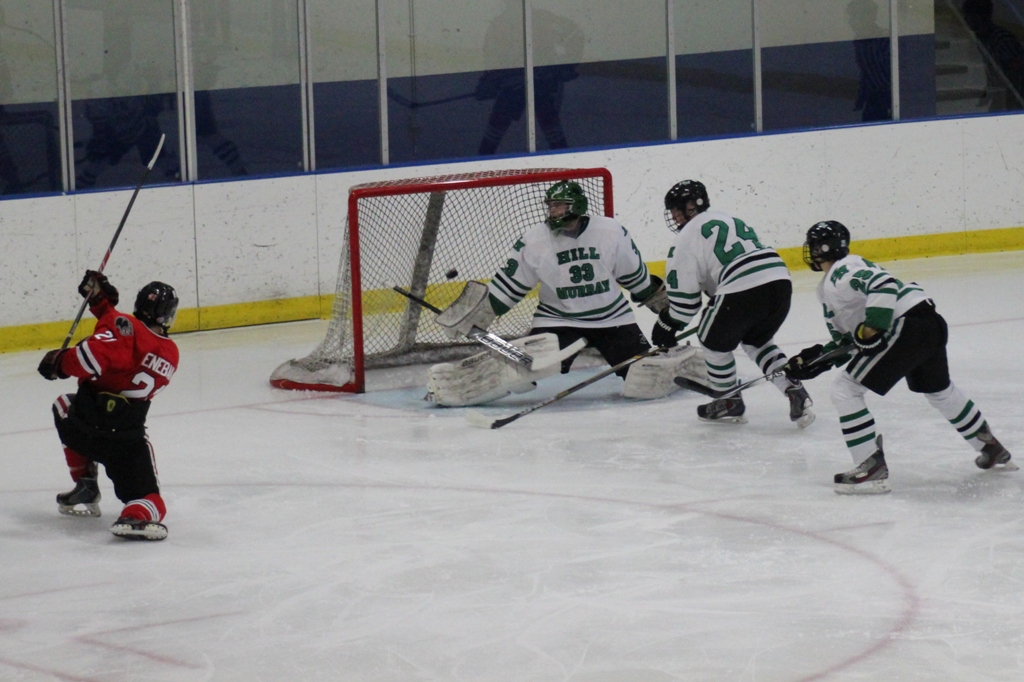 Henry Enebak’s second-period goal was the lone Lakeville North tally not scored by Nick Poehling in a 4-3 Panther win over Hill-Murray on Tuesday night at Aldrich Arena in Maplewood. (MHM Photo / Chuck Kelly)

MAPLEWOOD – As the leading goal scorer for the No. 1 ranked Lakeville North Panthers, Nick Poehling isn’t a secret to the opposition.

Always an offensive threat when on the ice, Poehling makes teams wonder when the future St. Cloud State Husky might have another hat trick game with two already on the season. But who had a feeling that Tuesday vs. Hill-Murray would be his third hat trick game?

“[Nick] texted me earlier in the day and said, ‘I feel great. I’m going to have a good game’,” Nick’s coach Trent Eigner said.

Poehling’s ‘good game’ of three goals led the Panthers to a narrow 4-3 victory over the No. 5 Hill-Murray Pioneers at Aldrich Arena. The Panthers improve to 8-0 while the Pioneers fall to 6-2.

Recently sick, Poehling felt a new level of confidence he lacked during his illness heading into the game against Hill-Murray.

“Most of the team has been sick so we’ve been down and today the energy was there so I knew I was ready,” Poehling said.

That high energy level was present from puck drop. Nick Poehling and his brother Jack put Pioneer goaltender Sean Wendlandt under heavy fire early. The fast-paced first period had a natural flow early on with often four plus minutes with no stoppage in play.

The back and forth flow came to an end when Nick’s brother Jack Poehling put the puck on net and Nick scored his first goal off the rebound.

“[Nick] is gifted offensively and he is playing confident right now,” Eigner said. “He’s doing a lot of nice things with the puck.”

As clean as the first period was, the second period made up for the lack of penalties. As the Pioneers and Panthers traded spots in the penalty box, they also traded off scoring goals.

Panther Henry Enebak missed a shot from the corner on Lakeville North’s first power play, but converted on the same shot seconds later. Two minutes after Enebak’s goal, Hill-Murray Pioneer Dylan Mills knocked in the loose puck, decreasing the deficit to one. But Nick Poehling would quickly return the favor on another power play, which gave Lakeville North the 3-1 lead heading into the third period.

Nick Poehling’s third goal came in the final second of a power play, giving Lakeville North its third power play goal of the evening. For Eigner, he wasn’t necessarily surprised by these results.

“If we get a good look at a couple of power plays, [We] can identify some areas that we can pick away at,” he said. “We felt that if we could rotate the puck from side to side, we could find some seams on the back door.” 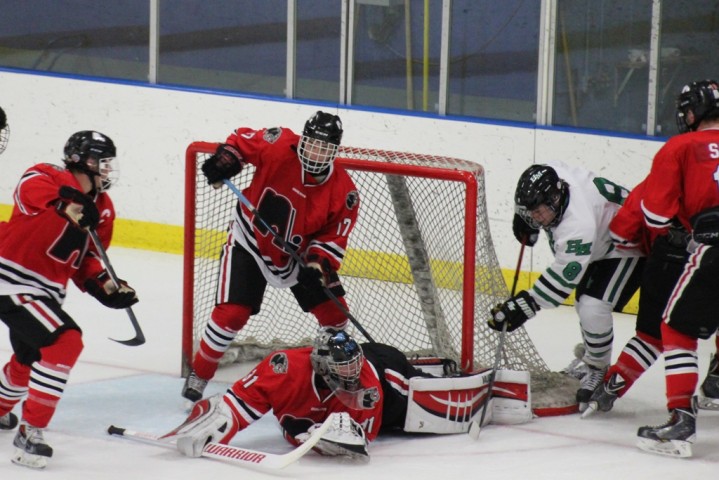 The Pioneers didn’t let the Panthers sit comfortably throughout the rest of the third as Kyler Yeo’s score narrowed the gap to 4-3. But Lakeville North kept an undefeated record because of a late save from Lakeville North goaltender Ryan Edquist, which kept the game from finishing in a tie.

While the win wasn’t dominant as some 2014 Panther victories, Eigner knows each game the opposing team will give Lakeville North its best as the number one team in the state.

“We know every time we go into somebody else’s building, this is the game they want to win,” Eigner said. “We’re the team they want to beat and they’ll bring their best efforts, and [Hill-Murray] did. But our guys responded well.”