Key to Panthers’ title hopes may be lurking in teammates’ shadows 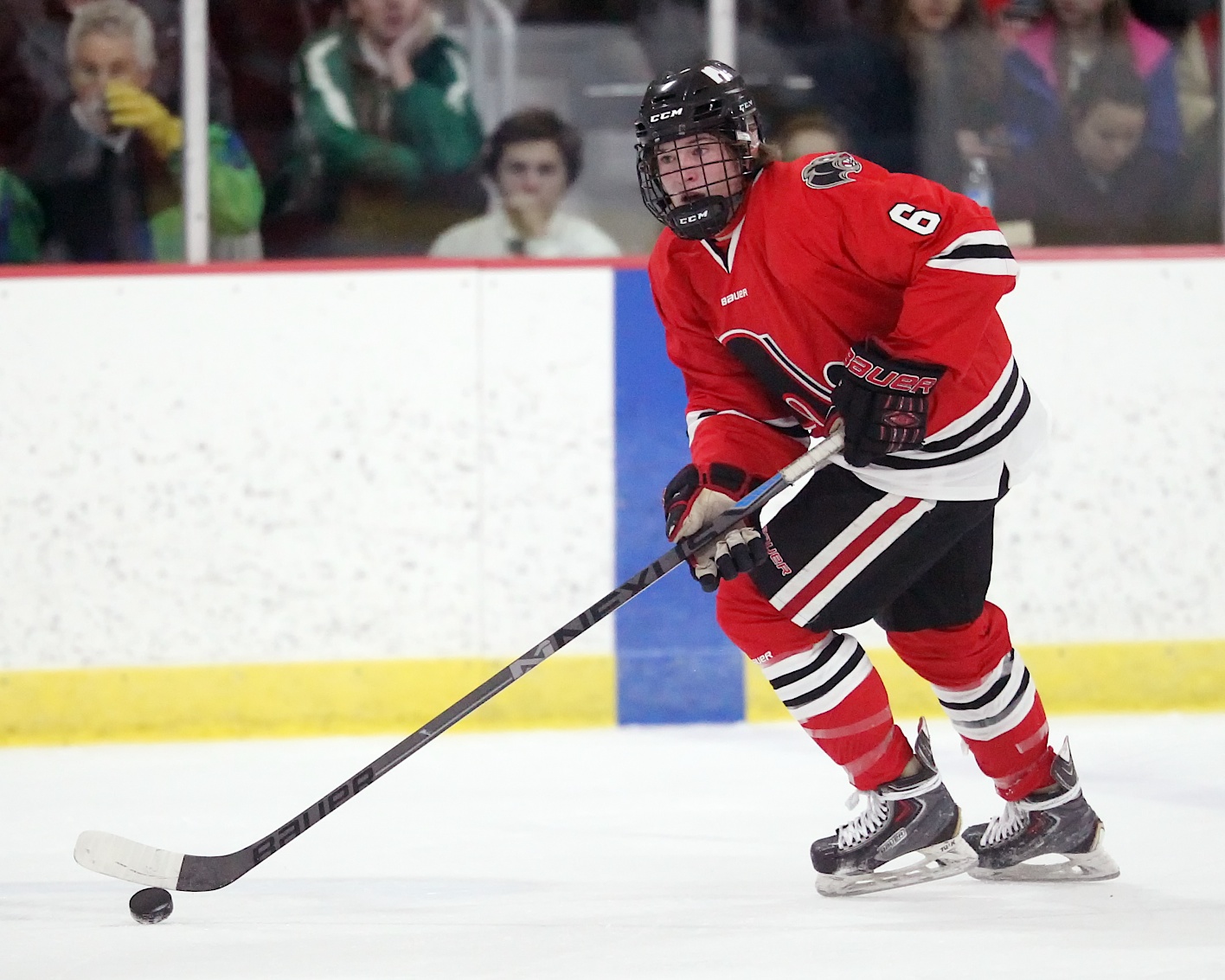 Key to Panthers’ title hopes may be lurking in teammates’ shadows

The Poehling name has become synonymous with Lakeville North boys’ hockey when fans speak of the undefeated Panthers.

Whether it is senior Nick Poehling, who leads the team with 21 goals, his twin brother Jack, the team’s leader in both points and assists, or even their sophomore brother Ryan who is close behind in all three categories, the trio arguably makes up the top offensive line in the state.

But with teams constantly game planning against the Poehlings, one player who is in a prime position to propel Lakeville North to its first state championship is junior center Max Johnson.

Drafted in the eighth round by the USHL’s Sioux Falls Stampede last spring, Johnson may not have the name recognition of the Poehlings, but he still plays an integral role offensively and defensively for the 19-0 Panthers. He is fourth on the No. 1 ranked Panthers in both assists with 15 and points with 24, only behind the Poehling brothers in both categories.

While the junior ranks as one of the team’s leader statistically, his immeasurable characteristics are what differentiate him the most.

“As you watch the team play and you notice other players who jump out at you, Max Johnson is one of them that does because of how hard he competes and he finishes every check,” said Gary Harker, an NHL scout who has seen Johnson from watching older Lakeville North players who are draft eligible.

Intensity and physicality are often a potent combination in hockey and for Johnson who is described as a physical player by his coaches in 2014-2015, this holds true.

But Johnson hasn’t always been this way.

“He was definitely a kid [coming out of Bantam] who brought a lot of offensive talents to the table,” Lakeville North head coach Trent Eigner said. “I think that the evolution of him as a player, his teammates, the coaching staff and I have both found out he is extremely physical and a punishing player.” 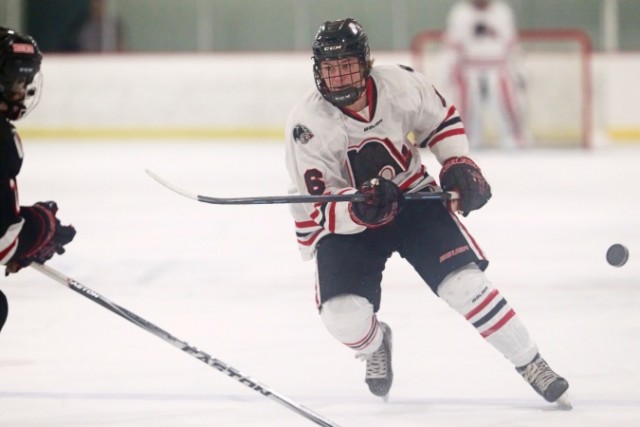 Johnson chips the puck up ice during the Panthers’ Jan. 13 2-1 victory over Duluth East. (Photo by Jim Lindquist/sidekick.smugmug.com)

He may play behind the Poehling brothers, but Johnson attributes part of his growth to being teammates with these offensive weapons.

“They’re my role models,” Johnson said of the Poehlings. “It’s hard to be like them, but playing behind them is a good opportunity for me. Watching them is just, wow. Some of the plays they make are unbelievable. I can learn a lot from them going forward.”

To Harker, it isn’t hard for Johnson to follow the lead of the Poehlings who are all committed to the St. Cloud State Huskies.

“The Poehlings work so hard and set such a high standard of compete that everybody on that team follows suit,” he said.

While Johnson is behind the Poehlings now, that may not be the case next year. Both Nick and Jack will graduate, leaving two open spots on the top line. Johnson could depart to the USHL next season, but if he returns, he will have an opportunity to prove himself to onlookers from the NHL who have the ability to draft him following his senior season.

“When those leaders are gone next year, is Max Johnson going to compete as hard as he did this year? We don’t know that and we will see,” Harker said. “Does he have talent? Sure, he’s got talent. That talent is not going to change. What’s going to change for him is the people around him.”

But if Johnson’s postseason success is any indication, the Panthers center may be up for the challenge of being a leader on next year’s team if he returns.

In the state finals last March, Johnson was the only one to score in his team’s 8-2 loss to the state champion Edina Hornets. But his postseason success doesn’t just stop on the ice; it transfers to the turf.

A midfielder on the Lakeville North lacrosse team, Johnson found playoff success last June when he helped his team to a fourth place finish in state, the school’s best in boys lacrosse history.

“Max came in clutch for us in our state quarterfinal game vs. Blake when he scored an incredible goal from behind the goal line,” Panthers lacrosse coach Jeff Wright said. “He’s also a tenacious player and plays with so much heart and passion.”

With Lakeville North’s ultimate goal of a perfect season and a state championship in 2014-2015, they will need every bit of the tenacity, heart, and passion that Johnson has.

If the Panthers make it back to the state finals at the Xcel Energy Center, they will play three games in three days, a tall order for any team. While the Poehling trio will need to step up, a second-line player such as Johnson could ultimately make the difference.

Often, the intangibles are what make the difference in winning state championships, and that is exactly what Johnson has.

“Those things to me, we call them detail things, those intangibles are what have made him as impactive as a player as he’s become,” Eigner said.