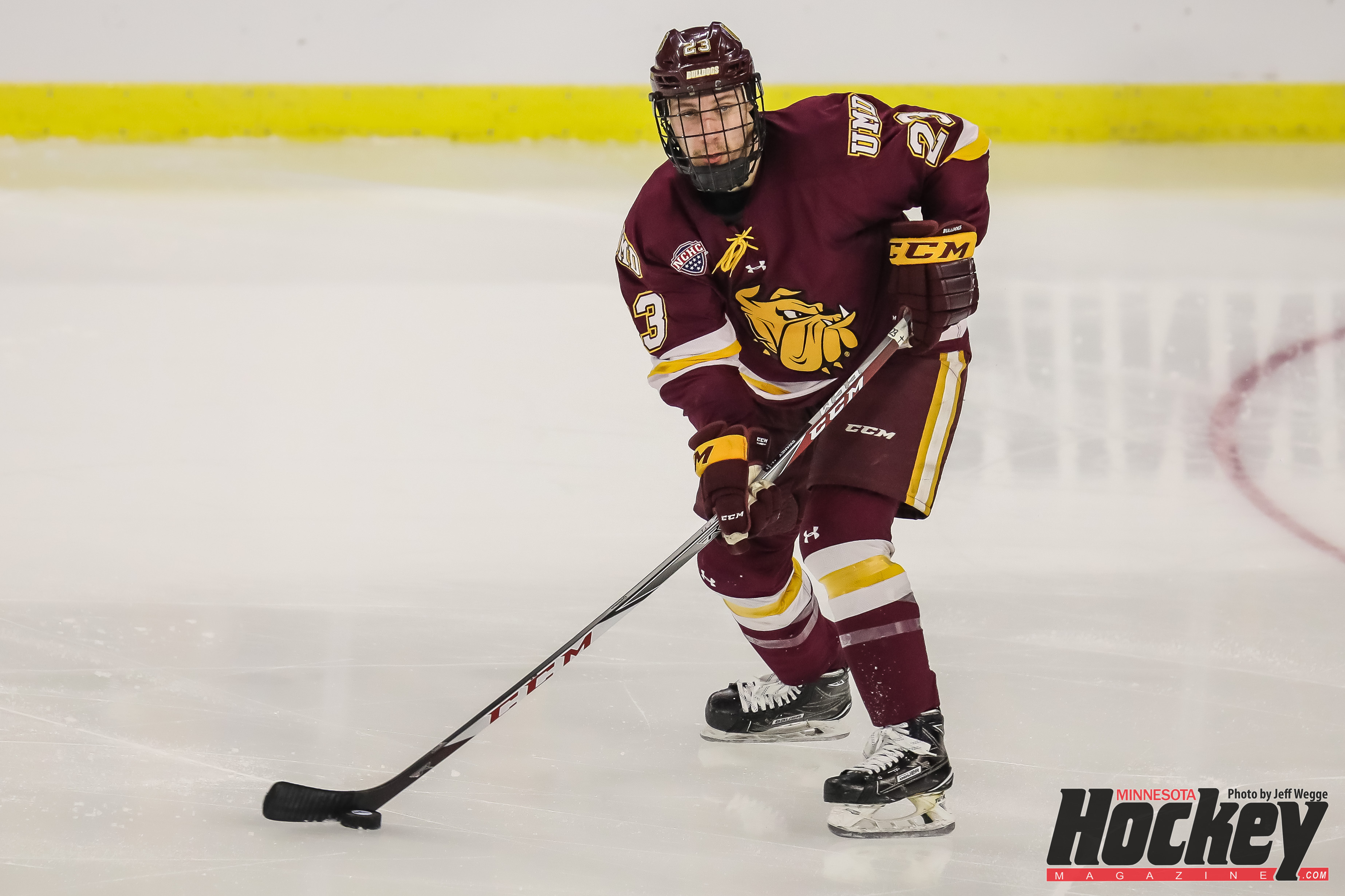 When the Minnesota Wild selected the 19-year-old Nick Swaney in the seventh round of the 2017 NHL Draft with the 209th overall pick last June, the former Lakeville South forward became the first player in school history to be drafted by an NHL team.

The long wait did not faze Swaney, who had been there before.

“It was my third year (of eligibility) so I was going in kind of just whatever happens, happens. If it wasn’t going to happen it wasn’t the end of the world and if it was it was pretty awesome. Obviously getting drafted by your hometown team is a pretty surreal moment for me and my family.” 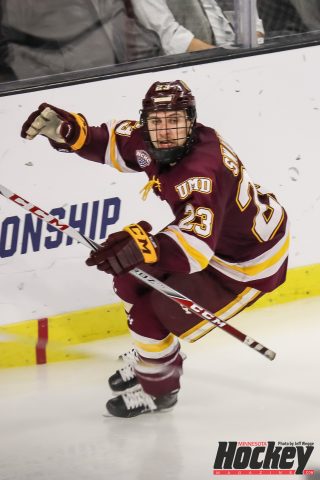 Although Swaney’s reign as the lone Cougar draft pick lasted just six picks, when fellow Lakeville South alum Joshua Ess was snatched up by the Chicago Blackhawks, no one can take No. 1 from him.

The humble Swaney, however, does not concern himself with those things. Instead, the now 20-year-old University of Minnesota Duluth freshman prefers to pay homage to those who came before him.

“I know I’m the first drafted but I think of guys that I looked up to like Justin Kloos, for instance, who didn’t get drafted but got a game with the Wild this year and is playing with the Iowa Wild,” Swaney said. “Growing up watching Justin and (former Bulldog) Kyle Osterberg play high school hockey really pushed me to where I am and hopefully I can do that for kids coming up right now too.”

This week, Swaney is once again following his fellow former Cougars once, this time to the Frozen Four, an event both Kloos (2014 with Minnesota) and Osterberg (2017) helped their teams reach.

“As a kid you dream of getting to the Frozen Four and, making it even better, playing at the ‘X’ in front of a big crowd is going to be something special,” Swaney said of playing for a national championship in the arena he one day hopes to call home.

Swaney grew up playing youth hockey in Lakeville and by the time he reached high school he was a player in high demand, especially after a strong showing in the Upper Midwest High School Elite League.

“I saw a kid that, obviously, could skate, he’s got good speed, but he could score,” Sandelin said. “Everybody’s looking for guys that can score.”

Shortly after the UMHSEL season concluded, Swaney announced his commitment to Sandelin and the Bulldogs.

I’m proud and excited to announce I’ve committed to play college hockey at the University of Minnesota Duluth! #Bulldogs

After finishing his sophomore season at Lakeville South, Swaney joined the United States Hockey League’s Waterloo Black Hawks and, in his junior hockey debut on March 15, 2014, scored his first USHL goal with 40 seconds left in a 7-3 win over the Dubuque Fighting Saints.

Swaney returned to the Cougars as a junior, scoring 25 goals and 57 points in just 25 games before rejoining the Black Hawks and contributing nine goals and 13 points their final 15 games.

Sandelin said the original plan when Swaney was recruited was for him to play two years of junior with the possibility of joining the Bulldogs sooner.

Swaney decided to forgo his senior season at Lakeville South and hone his game in Waterloo the next two seasons, scoring 115 points on 66 goals and 49 assists in 120 games, including 30 goals in his first full season.

“He had a really good first year in junior hockey but we felt he was a top-six forward for us,” Sandelin said. “I didn’t really want him playing maybe a third or fourth line role.

“There was some consideration of bringing him in after his first year of junior but we didn’t lose anybody that year and we were pretty much set.”

On one hand, that cost Swaney a chance to play in the Frozen Four with the Bulldogs a year earlier but, on the other, it gave NHL representatives more opportunity to watch him play consistently in a top-six role.

“For us, he’s your typical late bloomer,” Wild Assistant GM Brent Flahr said. “Last year,we spent a lot of time watching Waterloo and he’s guy that kind of caught everybody’s eye. At the same time, he’s not the biggest body so he needs to get stronger and gain a step and get quicker.”

Flahr added Swaney is a smart offensive player who can make plays and play in most situations. “Sandy does a great job with those kids up there, him and his staff,” Flahr said. “So we’re hopeful he continues to get better and so far, so good.”

Swaney wouldn’t disagree with that assessment, saying college hockey has been exactly as he expected and, overall, his rookie season has been a good one.

“I’ve had a couple injuries this year which kind of set me back a little bit and put some hiccups in the road,” Swaney said. “Just getting back that confidence here at the end of the season and knowing my linemates are going to be picking me up no matter what happens.”

Swaney comes to St. Paul playing on a line with seniors Jared Thomas and Karson Kuhlman, the team’s captain. The pair are the first players in school history to make four consecutive NCAA tournament appearances.

“Playing with them you get their best every single night and you feed off of it and makes you want to play up to their level,” Swaney said. 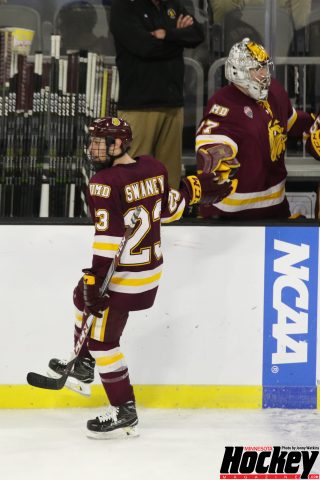 With its roster pillaged by graduation and the NHL,  2017 NCAA runner-up Minnesota Duluth was not expected to make another Frozen Four run this season. Yet the Bulldogs find themselves in St. Paul, site of the school’s first and only national championship and two wins away from another.

Swaney said resiliency has been key to the Bulldogs’ season, pointing to UMD’s poor showing in the NCHC Frozen Faceoff putting its NCAA tournament hopes in peril.

“We lost both of those games and kind of barely snuck into the NCAA tournament,” Swaney said. “We knew that’s all we needed; once we got in anything could happen.”

The Bulldogs bounced back in the West Regional in Sioux Falls, S.D., storming back from a two-goal deficit to eliminate Minnesota State in overtime and defeating Air Force 4-1 in the region final.

Swaney scored the tying goal against the Mavericks with 4:08 left in regulation and scored again 55 seconds into overtime but the goal was reversed when the officials ruled teammate Dylan Samberg had interfered with the MSU goaltender. Parker Mackay’s goal 1:33 later, however, officially sent UMD back to St. Paul.

While the Bulldogs are the underdogs among Notre Dame, Ohio State and Michigan, Swaney says UMD cannot be counted out this weekend.

“Obviously, it’s going to be kind of a different stage — more emotion and everything — but if we can just stick to what we know and just live in the moment and play period-by-period, things are going to go in our favor.”