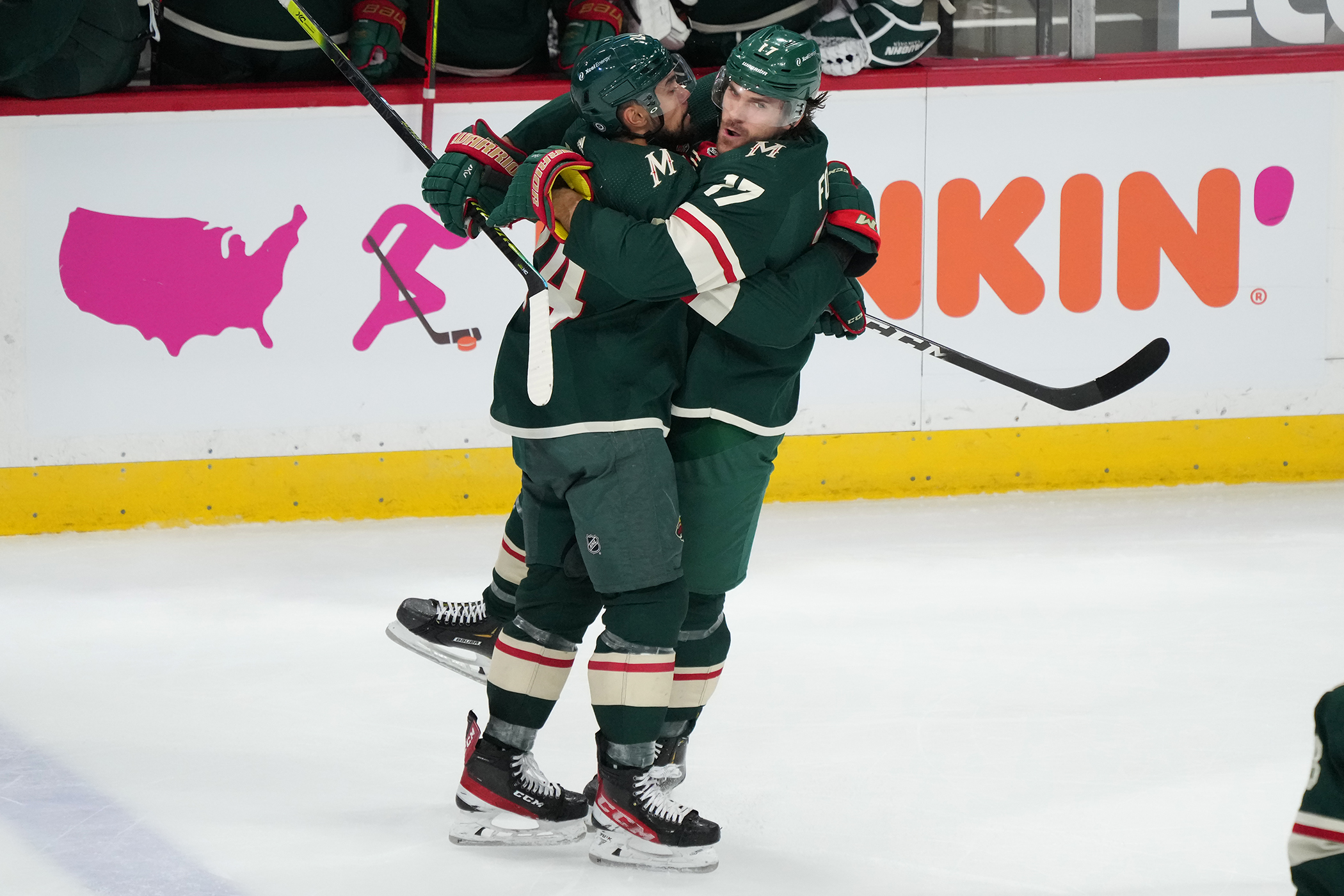 Sounds like a few ingredients for a letdown, right?

The Wild (31-14-3) looked like a different team in the third period, in a bad way, and the night ended in a 4-3 defeat at the hands of the rival St. Louis Blues (22-19-6) Wednesday at Xcel Energy Center. The game-winner hit the back of the net with 23 seconds remaining in regulation.

“It slipped away at the end,” said Wild coach Dean Evason. “Majority of the game, we were real good. Had majority of the play, and we made some mistakes at the end. It’s disappointing, no question.”

For the first two periods, the Wild kept its foot on the gas and generated offensive-zone time, took 1-0, 2-0 and 3-1 leads. But things did not go well in the third period for a Wild team that was one of the first in the NHL to clinch a playoff spot.

Some of those “little things” were puck possession and turnovers. 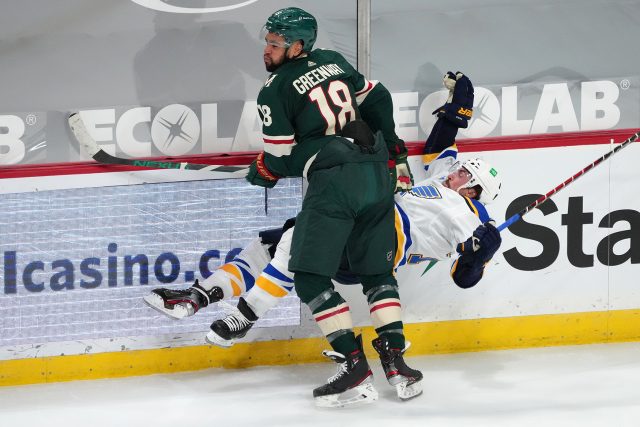 The Wild held a 3-1 lead headed into the third period, but the Blues cashed in on their second power-play chance of the game to make it 3-2 about 4 minutes into the period. A bad turnover behind the Wild net by defenseman Matt Dumba led to the tying goal a few minutes after that, leaving 25 alone in front for the goal, although the puck seemed to awkwardly slip off his stick before bouncing past Cam Talbot and into the net.

The loss snapped a seven-game winning streak for the Wild, which feasted on the likes of Arizona, San Jose and Los Angeles. Without a goal on the night, Wild rookie Kirill Kaprizov saw his five-game goal streak come to an end, too.

The Wild looked good to start the game, and through pretty much 40 minutes of play. Talbot, who’s cemented himself lately as the top choice in net, came through with an early pad save on a mini breakaway on Jordan Kyrou to keep the game scoreless. Nico Sturm created a turnover at the St. Louis blue line a few minutes after that to spring Zach Parise for a solid scoring chance.

But no other line’s presence was felt as much as the tandem of Jordan Greenway, Joel Eriksson Ek and Foligno. They were on the ice for all three Wild goals.

Jonas Brodin put the Wild up 1-0 with about two minutes to play in the first period when he fired an off-balance shot from the top of the circles. On the play, Greenway kept the puck in at the blue line, and Foligno fed the puck to Brodin.

Eriksson Ek made it 2-0 only 32 seconds into the second period, putting home a rebound into a wide-open net. Greenway generated that play as well, while Foligno skated right in front of the goal. Foligno kept the momentum going in the second when his wrister from the high slot made it through traffic for a 3-1 lead 1 minute, 2 seconds after the Blues got on the board with a power-play goal.

“Moose and Greener were doing a great job on the forecheck, and I was just trying to read off them and support them,” Eriksson Ek said. “But we’ve got to keep playing for 60 minutes if we want to win like this.”

Even in the third period, Foligno still thought their line played well, continuing their trend throughout the season.

“I thought our line’s been dominant all year,” Foligno said. “It was a good line game by us. I thought we still competed hard.” 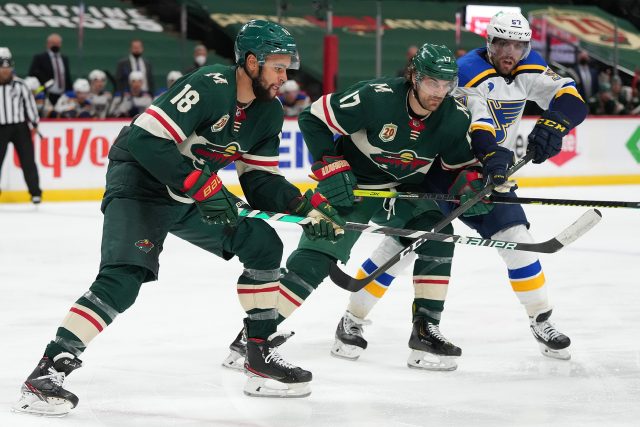 Jordan Greenway and Marcus Foligno tangle with a Blues player for the puck.  Photo by Rick Olson

Foligno, with his gritty play, enthusiasm and veteran leadership, is one of the reasons the Wild are a playoff team this year. Foligno was reunited with his line after missing 15 games with a lower-body injury. In his eight games back, he’s scored three goals and three assists.

In addition to his goal and assist on the night, Foligno recorded a game-high five hits in his 16:12 on the ice. Foligno and his linemates feed off each other as a smart, physical, hungry line, he said.

“Ekker’s been a huge part,” Foligno said. “You talk about a two-way forward who can handle everything when it comes to physicality and the offensive side, too, it’s been pretty exciting for him to see how he’s grown into the player he is now. And Greener, too, just taking big strides, those young guys.”

For his part, Greenway’s two helpers pushed him to a career-high 30 points this season (6-24—30) in 48 games. He scored 8 goals and 28 points in 67 games last season. Greenway also added a physical play late in Wednesday’s third period, bowling over two Blues players at the same time in open ice.

Eriksson Ek officially doubled his career-high goal total from a year ago, bringing his tally for the season to 16 and 26 points, three off his career-high total. Eriksson Ek went down after a collision at neutral ice in the third period, but he spoke with the media afterward and confirmed he’s “good.”

It’s a good thing because keeping Ek’s line together will be key come playoff time, no matter the opponent.