Where Legends Are Born 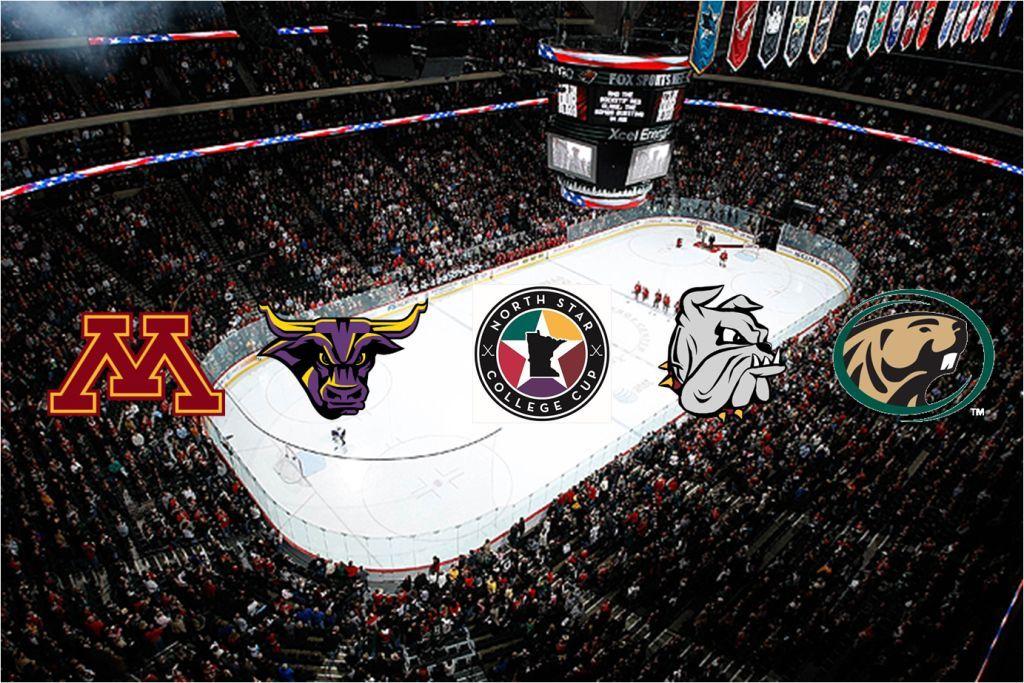 by Robert Desimone, special to WCHA.com
(republished with permission)

It’s rare…to have the opportunity in front of you and know that what you are a part of today is the start of something great. It’s usually in retrospect, not knowing at the time but looking back years later and reminiscing about the “good old days.” The tales grow taller with each year, and the players and fans have snapshots in time of moments they will “never forget.” So whether or not Minnesotans were looking for it, that opportunity is here to prove to the college hockey world that Minnesota is the true “State of Hockey’.”

“It’s important to be a part of,” said Bemidji State Head Coach Tom Serratore. His team will participate for the first time after St. Cloud State was given the invitation last year in the inaugural tournament hosted and won by the Minnesota Gophers.

“It’s an honor to be one of the five Division 1 schools from Minnesota to participate. We want to build it like the Beanpot Tournament in Boston, the history and tradition is second to none and that’s what we want to accomplish here.”

The Beanpot, played between the four major college hockey programs around Boston, Massachusetts, has been played annually since the 1952-53 season. Over in Michigan, the Great Lakes Invitational has been played every year since 1965. Two prime examples of events that not only display great hockey, but the great passion for hockey in those respective states. So for some in the college hockey world, it was a little surprising a similar event did not exist in Minnesota.

Perhaps it was taken a little for granted, with the great college hockey in Minnesota, the great players, the rivalries, and the teams repeatedly with opportunities to go at each other during the season for bragging rights. But with realignment came change and suddenly a very different college hockey landscape. That presented the right time and opportunity for a new tradition.

“Hockey’s a huge part of our state, its part of the fabric of all communities,” Serratore added. “It probably should have happened 15 or 20 years ago, but with the realignment it became a lot easier to put this tournament together and it made more sense. It’s exciting for everybody and that’s what we’re doing, we’re building something now for a bigger event later.” 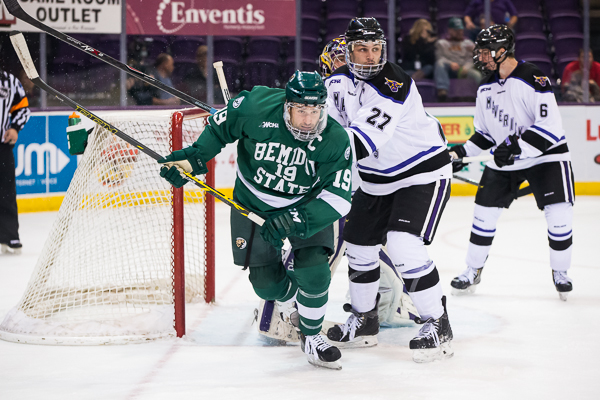 Bemidji State has been a large part of the state’s hockey fabric, with 13 national championships at the NAIA, Division LII and Division II levels. A native of Coleraine, Minn., Serratore has spent his playing and coaching career throughout the state and is now in his 14th year as the Beavers’ head coach. Under his watch, Bemidji State has advanced to the NCAA Tournament on four occasions, including a trip to the 2009 Frozen Four.

With statement victories this season over North Dakota and St. Cloud State, and a blend of veteran leadership and talented newcomers, BSU is a program once again on the rise.

“We’re a program that has a tremendous work ethic and we’re hard to play against. We want to play fast, pressure the puck, and hopefully that pressure can create a lot of offense. That’s the style we’ve always played and hopefully how we’ll play this weekend.”

Serratore and his Beavers will bring that style to the X this weekend – an opportunity his players are excited for.

“Our players know it’s on the schedule, they know it’s at the X, at an NHL venue, they know the teams they’re playing,” Serratore added. “It is a great event, a big time event, and the guys are enthusiastic about it. ”

Minnesota State, which is unbeaten in its last eight games (7-0-1) and is 13-1-1 in its last 15 contests, is also looking forward to competing for the North Star College Cup.

“It’s fun to showcase the great talent that Minnesota teams have and put them on the big stage at the X in the ‘State of Hockey,'” said Mavericks’ senior and team captain Brett Stern. “All these teams have won big games at big times. We know we’re playing the Gophers [on Friday] and they’re a great team, so skilled and talented and they’ve proven themselves year after year.”

But, heading into this weekend, it is the Mavericks that have earned the top spot in the national rankings – a different perspective from when Stern and his roommate, fellow senior defenseman Zach Palmquist, started in Mankato as freshmen.

“I knew we had some talent our freshman year and knew we could build a good team, but never envisioned this. To be at a spot in my career to say we’re the number one team in the country is a pretty cool feeling,” Palmquist said.

Along with that top ranking comes an even greater challenge, one that second year Head Coach Mike Hastings knew would be tough. Following the Mavericks’ first day at the top, he challenged his team in practice to raise the bar and so far both Stern and Palmquist are happy with the response.

“Our team handles our business well during the week,” said Palmquist. “We know we have the target on our back and we keep to our business and worry about us. We keep our emotions even keel and never let the rankings get to our head.”

Both Stern and Palmquist give credit to the current and former players that have helped establish the “Maverick way,” as Stern likes to put it, but they also credit Coach Hastings for helping with the turnaround.

“He changed the mentality of the program,” Palmquist said. “What he’s done is unbelievable, leading the team to an NCAA Tournament in the first year and really changing the culture.”

Hastings took over the team at the beginning of the 2013 season, a team that was on the rise after improving from 11th in the WCHA in 2012 to fifth in 2013. It was a combination of Hastings coming on board, along with the leadership of former captains Eriah Hayes and Tyler Elbrecht (2012-13), and Johnny McInnis (2013-14) that helped catapult the Mavericks into the national spotlight over the past two seasons.

“It’s surreal. If you were to tell me freshman year that I’d be sitting here number one in the country…that was a dream,” Stern added. “But now it is reality, and I give thanks to the past seniors that put in the work because they are a big reason why we’re all here.” 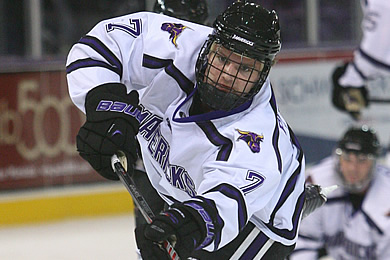 Being number one heading into the tournament isn’t the only thing what will make this weekend special for the Mavericks, though. For a South St. Paul native like Palmquist, it’s a perfect connection to his hockey roots.

“I live five minutes from the X, so going to Wild games back in the day was always on the family agenda. I started at 3 years old, I have an older brother, younger brother, and sister that all played. My younger brother is a goalie and would suit up so we could rifle pucks at him. I had competitions with my older brother. It was just a fun atmosphere growing up with the whole family tradition.”

A tradition shared by most hockey fans in the State of Hockey – one that doesn’t go without some sacrifices along the way.

“Let’s just say my parents had a full schedule when we were younger, running from rink to rink,” Palmquist joked. “I couldn’t thank them enough though for all the hard work and money they spent for us.”

A necessary sacrifice for parents with kids that dream of one day playing at the X, so when that opportunity arrives, it becomes more of a family celebration, that familiar chance to reminisce about all the years it took to build to this point.

“I talked with my dad and they’re prepared to buy 20-25 tickets…there are going to be a whole lot of Palmquist’s at the rink this weekend,” Palmquist said, laughing.

But as the Palmquist family arrives at the tournament this weekend, it is just one of numerous Minnesota families that are able to celebrate and enjoy similar opportunities. It is the reason why the North Star College Cup is the perfect event for Minnesotans to unite as one college hockey community and to celebrate the unique passion, talent, and opportunities that are available to kids throughout the State of Hockey.

Stern is another example, while admitting he was a late bloomer starting as a third grader, when the passionate hockey community drew him in. “I lived on a lake, so we had rinks growing up and I had skates and a stick, but I didn’t play on a team,” Stern said. “I had friends playing after school and I asked if they wanted to come play video games, but they had practice, so I finally decided I had to work my way in [to the team]. But, it’s such a big hockey community and everyone plays when you’re young, so it was easy to jump in.”

Palmquist and Stern are just two of the 56 Minnesotans at the tournament this weekend. So, as fans walk the concourse at the X on Friday and Saturday, it is likely they will be passing a family member, a friend, a former teammate, or maybe just a passionate fan from one of those many great hockey communities. It’s a connection most people in the building should realize they have with each other – and take the opportunity to share their stories in the kind of environment those memories are built for.

And while the tournament is still in its infancy, the years will quickly pass and the start of something new will become more of a staple. That makes it that much more important to remember that those legendary moments and snapshots in time are created now. It’s an opportunity the players are sure to appreciate, and the fans should as well.

“It will be fun to look back and be able to tell people I played,” Stern said. “It’s rare to have the Minnesota teams in one spot where people can watch two games each night of arguably the best in all of college hockey.”

Rare indeed. And, the perfect reason for those passionate Minnesotans to support and relish the opportunity to be a part of something special – from the beginning.