Wild kick off 2015-16 season with high expectations, work to be done 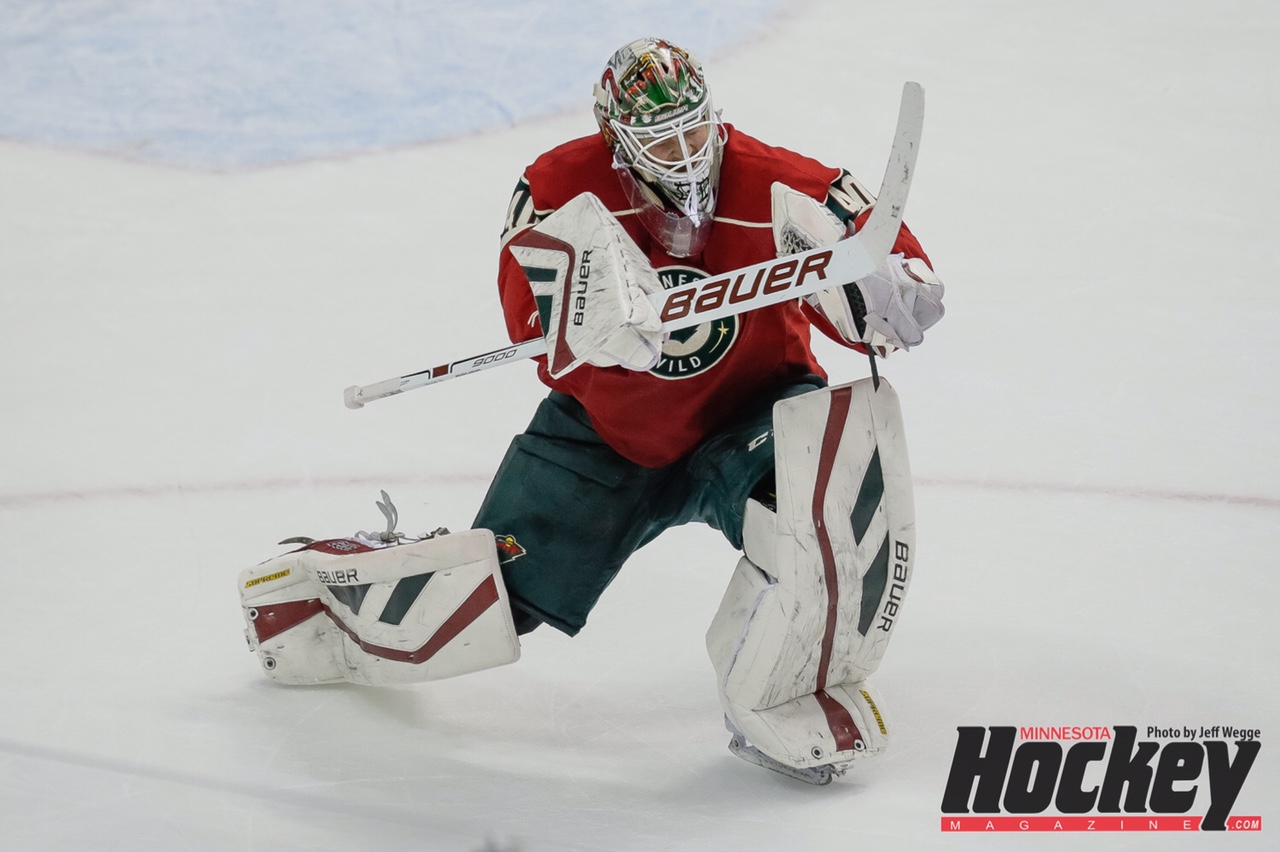 Minnesota goaltender Devan Dubnyk is as fired up as anyone, if not more, for the start of the 2015-16 NHL season. (MHM Photo / Jeff Wegge)

Wild kick off 2015-16 season with high expectations, work to be done

The Minnesota Wild drops the puck on season number 15 tonight in Denver against Patrick Roy’s Colorado Avalanche. The teams opened the 2014-15 season with a home-and-home “series” in which Minnesota’s then goalie-of-the-future, Darcy Kuemper, shut out the Avs (5-0, 3-0) in both games.

At the time it was quite a statement considering the Wild’s contentious seven-game series win over Colorado in the opening round of the 2014 Stanley Cup Playoffs just five months prior. Ultimately, both teams struggled last season with only the Wild, behind a historic second-half surge, managing to return to the postseason.

Fast forward to tonight and both teams have something to prove. Colorado wants to show the rest of the National Hockey League that it’s down year was a fluke while the Wild — along with current goalie-of-the-future , Devan Dubnyk — aims to demonstrate their stretch run was not.

For that to happen, several factors come into play for Minnesota and here’s a few of them in no particular order: 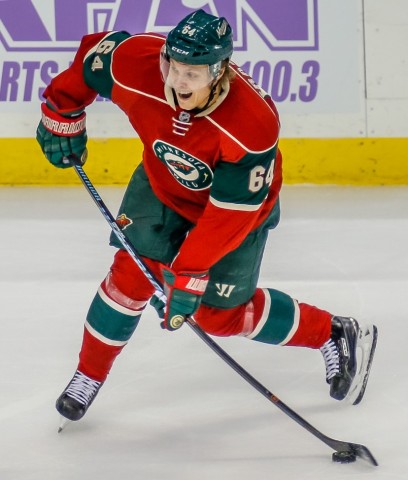 Looked upon as a position of strength a year ago, Minnesota was anything but strong up the middle in 2014-15.

After posting a solid 41 points (8-33—41) in his first full season in a Wild sweater in 2013-14, Mikael Granlund further boosted expectations in the playoff with five points against Colorado, including his electrifying Game 3 overtime winner.

Granlund’s production dipped (from 0.65 points per game to 0.57), however, despite playing between Zach Parise and Jason Pominville for the majority of the season. Granted, Pominville’s struggles to find the net last year are well documented, but the Wild need more from Granlund if they are going to do more than sneak into the playoffs.

Like Granlund, Erik Haula made a splash two years ago racking up 15 points (6-9—15) in 46 games to close out the regular season, another seven (4-3—7) in 13 playoff games and was a combined plus-16. While Haula remained a stingy penalty killer in his sophomore season, the former Gopher scoring leader managed just 14 points and was a minus-7 despite playing 26 more games last year.

Needless to say, the Pori, Finland native will open the season under coach Mike Yeo’s microscope and a quick trip to Yeo’s doghouse awaits him if he can’t turn things around early on.

With third-line staple Kyle Brodziak preparing to face the Wild in Saturday night’s home opener as a member of the St. Louis Blues, rookie Tyler Graovac steps into that role between Charlie Coyle and Thomas Vanek. While he has the skill to top Brodziak’s 20 points in his final season in Minnesota, the question is whether the 6’5”, 200-pounder can match the intensity his predecessor brought night in and night out.

That leaves Mikko Koivu. Minnesota’s captain is who he is and that’s a player who will give you 40 to 50 points (when healthy), play a solid game in his own zone and win critical draws at both ends of the ice. With that said, the sooner someone like Graovac can develop and supplant Koivu in a top-six role, the more dangerous the Wild will become. But don’t look for it this season quite yet. 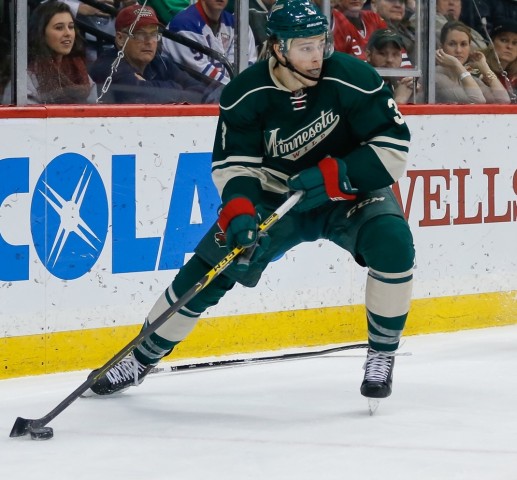 Charlie Coyle’s stong pre-season (1 goal, 7 assists) provides hope that he is ready to be relied upon every night. (MHM Photo / Jeff Wegge)

Wild General Manager Chuck Fletcher, often fairly active in June and July, was mostly a spectator over the summer. Brodziak and Chris Stewart departed via free agency while the cap-strapped Wild’s biggest splash was outbidding the Chicago Blackhawks, among others, for free-agent defenseman — and former Gopher blueliner — Mike Reilly, who will start the season with Minnesota’s American Hockey League affiliate in Iowa.

Although Fletcher’s hands were essentially tied, the message was sent that the Wild’s young core was going to be counted on to transition their games from prospect to pro potential to give Minnesota any chance to climb the Western Conference ranks.

In addition to Granlund and Haula, players like Charlie Coyle, Jason Zucker, Nino Niederreiter, Matt Dumba and Christian Folin must take significant steps forward in their development or the Wild will remain simply playoff participants rather than true factors in pursuit of the Stanly Cup.

If the pre-season was any indication, there is reason for optimism in that regard.

Stability in the crease

Kuemper’s strong start a year ago jump started Minnesota to a 7-3-0 record through 10 games with all three losses coming by a single goal. But Kuemper’s inconsistent play, along with that of Niklas Backstrom, contributed to the Wild’s annual mid-season swoon and left the team’s confidence shattered. 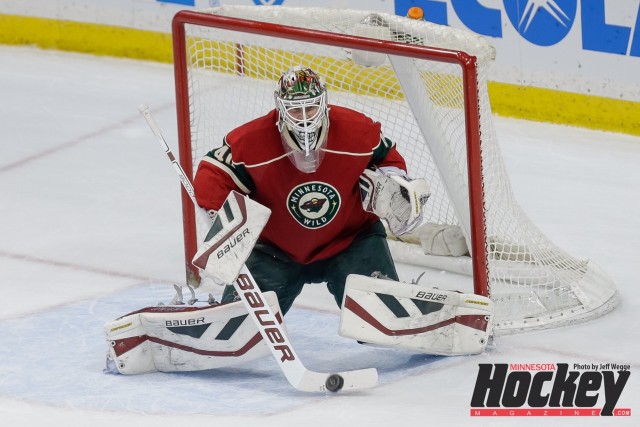 Devan Dubnyk rescued Minnesota’s 2014-15 season. But the Wild’s postseason hopes shouldn’t be all on his shoulders this year. (MHM Photo / Jeff Wegge)

Enter Devan Dubnyk. Like Kuemper, Dubnyk, acquired via trade from the Arizona Coyotes on Jan. 14, pitched a shutout the following day in his season debut with the team, a 7-0 road blanking of the Buffalo Sabres. Dubnyk would go on to start a franchise-record 38 straight games, posting a 27-9-2 record with a 1.78 GAA, .936 saves percentage and five shutouts to lead Minnesota into the postseason.

The Wild can’t and shouldn’t count on numbers, much less a workload, of that nature out of Dubnyk over the course of his first full season. But with a long-term (six-years, $26 million) deal signed over the summer, he is poised to provide Minnesota with the stability and consistency at that position it has so desperately needed for a long time.

Kuemper, for his part, must adequately share some of the load to keep Dubnyk fresh over the long haul. He has the body, skill and demeanor to eventually be an NHL starting goalie but has struggled with his consistency.

Dubnyk’s contract is a clear sign Kuemper is unlikely to ever be a No. 1 in Minnesota so he is essentially in audition mode for the rest of the league. Every start he gets is an opportunity to boost his trade value and it’s in both his and the team’s best interests that he seizes it.

The best thing Backstrom can do for Minnesota is be ready if called upon and, more importantly, not become a distraction. 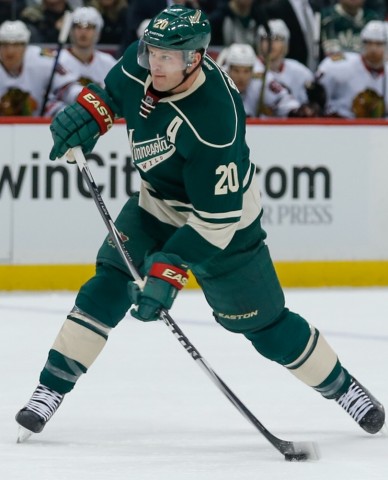 Yeo shuffled his defense pairings in the pre-season in an effort to balance them out and pave the way for a little more time off for top defenseman Ryan Suter. A fixture near the top of the league’s leaders in ice time, Suter will still see plenty of ice, particularly in crucial situations, but his workload will be reduced.

Suter will start the season paired with Jared Spurgeon on the Wild’s top unit while former partner Jonas Brodin lines up alongside his pal Dumba. Marco Scandella anchors the third pairing with second-year pro Folin. Yeo has confidence in all three units and has said he would rank his top six defensemen with anyone’s in the league.

Will that translate to resisting the urge to send Suter over the boards as often as he has in the past? That remains to be seen, but there were indications in the 31-year-old’s play last season, particularly in the first half, that Suter could benefit from a few more breathers.

The loss of his father on the eve of training camp can’t be discounted as a factor in Suter’s reduced effectiveness for much of last season but a healthy, well-rested Ryan Suter returning to dominant form will be critical to any success the Wild finds in 2015-16.