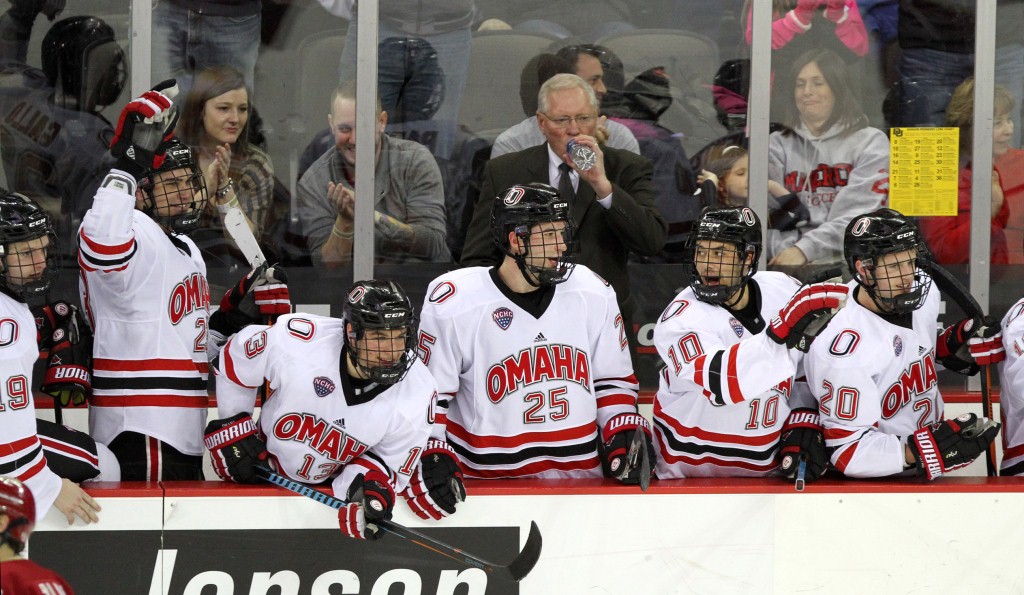 The 2015 NCAA men’s hockey tournament was not kind to schools based in the Land of 10,000 Lakes despite its members comprising 25 percent of the 16-team field. On successive days March 27-28, Minnesota, Minnesota State, Minnesota-Duluth and St. Cloud State’s bids to reach the Frozen Four in Boston each came to an abrupt and unceremonious end.

Although this marks the first Frozen Four without a Minnesota school since the forgettable 2010 Ford Field debacle (are you with me, Wisconsin fans?), fear not, as the State of Hockey will not go unrepresented in Beantown.

For those still reeling from the sting of elimination looking for a reason to watch the TD Garden party with Barry Melrose on mute, I submit to you: The University of Nebraska Omaha Mavericks.

A contingent of eight Minnesota-bred players, coached by International Falls native, and former Gopher, Dean Blais, traveled to Boston this week as members of the Mavericks.

To be fair, seven Minnesotans dot North Dakota’s Frozen Four roster but crafting a compelling argument convincing Minnesotans to rally around a UND title bid is akin to attempting to coerce a Yankee fan to cheer for the Red Sox in October.

Nebraska Omaha’s Minnesotans have been anything but bit players, mind you, with four of UNO’s top six goal scorers and five of its top seven point producers calling Minnesota home. At the top of that list is Guentzel , an All-NCHC Honorable Mention honoree who leads the Mavericks with 38 points on 13 goals and 25 assists in 35 games.

Blais, who won two NCAA titles (1997 and 2000) in 10 seasons with North Dakota, said when diving into Minnesota’s deep talent pool he seeks a specific type of player.

“If they don’t look like they have the passion for the game and they’ve got a history of having to motivate them with a cattle prod, those aren’t the type of players that will play for me,” Blais punned. “The players here that are Minnesota products have always wanted to do anything they can to win.

“And you check the guys on our roster and they all kind of fit that mold.”

The Mavericks (20-12-6, 12-10-4 NCHC) finished third in the National Collegiate Hockey Conference regular season standings but were swept at home in the first round of the NCHC playoffs by St. Cloud State. Despite sitting out the NCHC’s Frozen Faceoff at Target Center, UNO received an at-large bid to the NCAA Tournament as the No. 2 seed in the Midwest Regional in South Bend, Ind.

“It was really a time for us to get back to work and get everyone healthy and kind of regain our confidence and go back to the fundamentals we’ve been working on all year,” Parizek, a sophomore forward, said about the two week layoff between games. “Obviously, it paid off in South Bend and we’ve got to take it to the Frozen Four.”

After dispatching Harvard 4-1 in the first round, only No. 16 seed R.I.T., upset winners over top-seeded Minnesota State, stood in the way of the Mavericks’ first trip to the Frozen Four. The teams played a scoreless first two periods but UNO scored four times in the third for a historic 4-0 win.

Although just five of Randolph’s 26 points are goals, the freshman’s fifth turned out to be the game winner in the third period against Tigers and currently stands as, arguably, the most important tally in program history.

“It was kind of shocking, I mean, I usually don’t score a goal like that,” Randolph said of his one-timer from above the circles. “Usually if I’m scoring a goal it’s around the net getting knocked down. It was special; I’ll definitely never forget it. It’s definitely my most favorite goal to date.”

Snuggerud , an NCHC All-Rookie Team selection, and Parizek assisted on Randolph’s goal while Snuggerud helped out on Parizek’s goal later in the period, as did Guentzel who finished the regional-clinching win with a pair of assists.

“It seemed like everything was clicking once we got that first one and that’s going to be important, too, in these next games is just trying to score that first goal,” Randolph said. 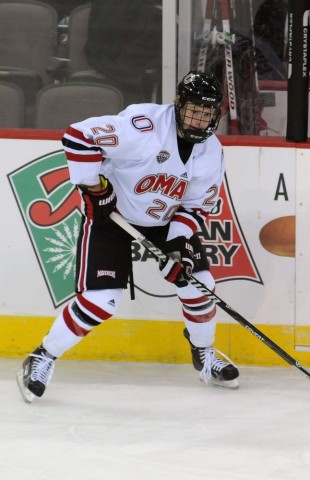 Heading into the postseason, Guentzel wasn’t even the best bet in his family to reach the national semifinals. His father Mike is Don Lucia’s long-time assistant at Minnesota and briefly assisted Blais at UNO (2010-11).

“He’s the biggest influence on my life,” said Guentzel, an All-State performer as a junior at Hill-Murray. “He’s been there since day one and without him I have no idea where I’d be in hockey or in life. He teaches me all of the little things to be successful and I’m very fortunate to have someone like him.”

The Gophers, fresh off sweeping the Big Ten’s regular season and tournament titles, were viewed as more likely to reach their 22nd Frozen Four than the Mavericks were to make their first appearance in three trips to the NCAA Tournament (2006 and 2010). But Minnesota-Duluth eliminated the Gophers in the tournament opener for both teams.

Randolph, son of legendary Duluth East coach Mike, is also a product of a successful coaching pedigree and says no one knows his game more than his dad.

“I talk to him every day, whether it’s texting him over the phone or calling him for an hour, and we’ll just talk hockey,” Randolph said. “He watches every single game and tells me what I need to do and what I can improve on and makes sure I never get satisfied.

“I’m really lucky to have him in my corner.”

Home away from home

Like many of his teammates Randolph was also fortunate to have some familiar faces in his corner when he arrived on campus last summer. Having grown up playing either with or against one another on elite level teams throughout their youth and high school careers, the Minnesota kids, for the most part, weren’t complete strangers prior to landing in Omaha. 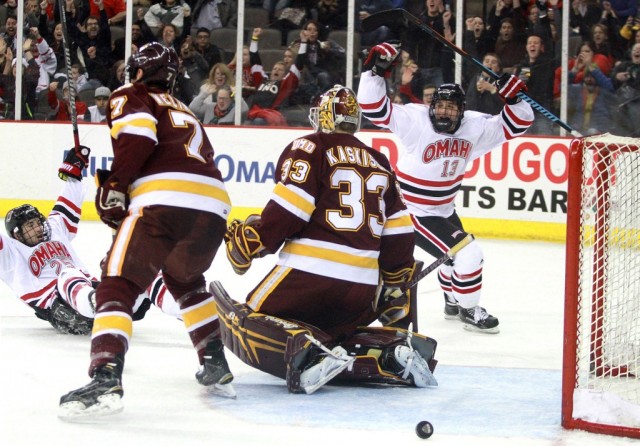 “I remember seeing in the summer how many Minnesota guys we actually have, which is odd for a Nebraska Omaha team,” Randolph said. “Guys like Parizek and Guentzel helped me a lot in my transition. It’s been fun with them.”

“I knew Randolph from Duluth East and I knew Tyler [Vassel] from Rochester and we all knew each other,” said Parizek who rooms with Youso. “So, I mean, you kind of become friends right off the bat just being all from Minnesota.”

While their allegiance is clearly to the team as a whole, the players acknowledged a special bond with their Minnesota brethren, especially when early March rolls around.

“I would say I hang out with pretty much any of my teammates, that means if they’re from Minnesota, California or Canadian,” Parizek said. “But it’s been really nice to have a lot of Minnesota guys on the same team because, obviously, you’ve got a lot of familiar things to talk about and when the state tournament’s going on, the rest of the team’s telling us to shut up.”

“We were talking about [the state tournament] for a couple weeks leading up to it and guys from out of Minnesota just could not stand it,” Randolph said. “They could not stand hearing the talk about the tourney because they just don’t understand how special that was to us and how cool of a venue it is.”

Guentzel, Parizek and Randolph each said they’ve been blown away by the outpouring of support they’ve received from back home leading up to and since their regional win. The college hockey prognosticators have not been nearly as kind, however, but the Mavericks don’t mind a bit and look forward to continuing their bracket-busting run.

“We just laugh it off and prove them wrong.”

When Guentzel takes the ice in Boston this week, sage advice from his father will accompany him.

“You can’t be tight and nervous, you’ve got to have fun and just make the most of the opportunity,” Guentzel said. “Obviously, it doesn’t happen very often and we’re just so close right now, so why not finish it off.”