Life Skills and Goalie Drills ~ An Interview with Mitch Korn 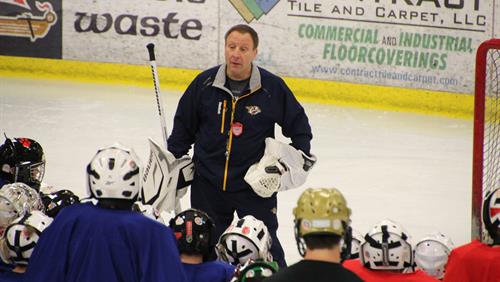 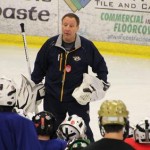 Mitch Korn is not the kind of man to beat around the bush about who he is. As a child, the 55 year-old goalie coach of the Nashville Predators shared a room with his sister and his grandmother, and until the NHL came calling he believed the finer things in life included steaks from Ponderosa at six bucks a piece – baked potato included. The self-proclaimed “off-color New Yorker” is a man full of character, intense drive and sharp-edged honesty, and his goalies wouldn’t have him any other way.

Minnesota Hockey Magazine caught up with the colorful Korn during a weekend goalie camp in Duluth, Minnesota at the beautiful Heritage Sports Center where he discussed his life, his role in hockey, and his incredible passion for not just the game of hockey, but how life can be taught through it.

AG: When was it that you really got involved with youth hockey?

MK: It’s always been my first love. I started as a counselor at CAN/AM hockey school in Guelph, ONT, CANADA when I was 15 years old. When I was 17 I was one of the youngest instructors that they ever hired because one of my mentors, a guy named Ted Ouimet -the head goalie coach at CAN/AM who I aspired to be like – retired from pro hockey and became a fireman in London, ONT, CANADA (I think). So two weeks before CAN/AM started that summer they promoted me from counselor to coach to replace Teddy and that’s kind of how I got my start and I’ve been doing it ever since…and I’m like 107 now. 55 actually but I’ve aged pretty well for 55.

AG: You are used to working on the NHL level but during your summer camps you are working with youth goalies. How do you translate your higher level coaching skills into a level usable by developing youth goalies?

MK: I actually like it much better. Don’t get me wrong, the NHL is awesome, it’s the NHL, but given the choice this is pure, this is great, these kids can benefit so much more. I believe we can have such a positive impact on their hockey life and I think their life in general, because we not only teach hockey stuff, goalie stuff, but life skills. If you’ve ever heard me talk to the group and the way we break things down we are very detailed, very intricate, and honestly I really like that.

AG: What is the Number one lesson you want these kids to leave camp with?

MK: It’s not worth doing unless you do your best. It doesn’t matter what it is, it’s not worth doing unless you do your best. That’s one. Another is: there’s no substitute for maximum effort. Playing hockey isn’t work, its love. Some people go to work every day and fill potholes or stock shelves, they don’t love it, they work. The word work seems not to have a positive connotation to it. When we are an athlete and we are training and we are putting forth that effort, that’s not really work. We just want them to be better at the end of the day and be the best they can be.

AG: What are you going to take away from the kids at this camp?

MK: Every week I learn a little something. Every week I want to laugh. Every week I give out my favorite award; it’s not a hat, it’s not a shirt, it’s not a hardest worker or most-improved, it’s the ear of Korn award. The ear of Korn award is given out to the most entertaining camper. I spend a lot of time talking to and entertaining the kids. I give out an award to the kid who entertains me. One of the other reasons I do this is because if you are in the NHL it’s really easy to lose touch with what’s happening because the NHL is a higher level and the goalies are older and you lose touch with the young stuff. By doing camp, you’re really seeing what’s modern, what’s happening, what the attitude is not only from the kids but also from the counselors and the coaches. When you are the goalie coach for the team there’s nobody else. When the Nashville Predators sit down and get ready for practice there are three coaches bouncing ideas off each other. When the goalie coach gets ready for practice he bounces off the wall because there’s nobody else to talk to about what you want. You are the guy, there’s nobody else, so I really enjoy this because it really keeps me modern and younger and more in tune to what’s going on.

AG: Do you ever find yourself taking things back from the coaches you work with over the summer to your pros?

MK: Oh yeah. Its just part of me, makes me more knowledgeable, makes me a better coach.

AG: You came off a really condensed hockey season due to the NHL lockout. Was it tough to come back this summer and run multiple hockey camps after the crazy schedule you just went through?

MK: We’ve been doing these camps for over 15 years. I used to do Buffalo camps every summer before these. It was the camp in Buffalo that got me the job with the Sabres. Rick Dudley saw me doing the camp in Buffalo and said “I want to hire this guy.” That was in the summer of 1990 and I got hired in ’91. I’ve really been doing camps before that and ever since. I have downsized a little bit; we have seven camps we used to have ten. I will do these until I can no longer do them. Once again, they are pure and they are more fun for me travelling in the summertime. The impact we have on the young people that work for us, the guys who travel with me, Barry Trotz calls them “children of the Korn,” and they are all the young guys that over the years I’m still in touch with who are very successful either still in hockey or a lawyer or a business guy or this or that. The camps are little microcosms of real life and I think we do such good work, we provide such positive knowledge in both hockey and life to these guys that it will just never go away. Eventually, soon believe it or not, I’m going to retire from the NHL and I am going to keep the camps in the summer and I’m going to enjoy my winters in Florida.

AG: What is your absolute favorite memory from your coaching career?

MK: A lot of the memories are actually funny things that happened, goofy things that guys did. The single most valuable portion of my coaching career is the positive influence we had on people. To watch the development of a Steve Shields, a Dominik Hasek, a Tomas Vokoun, a Pekka Rinne, or guys that used to work for me who I started with at ten years-old as kids that are now coaching college hockey or the general manager of a business or that kind of stuff, that’s my greatest memory and pride is the positive impact we’ve had on lots and lots of people.

AG: What is your number one piece of advice for any hockey player on any level?

**You can follow Mitch Korn on twitter at @MitchKornPreds and the author of this interview Amy Gist at@AmySnow17.**