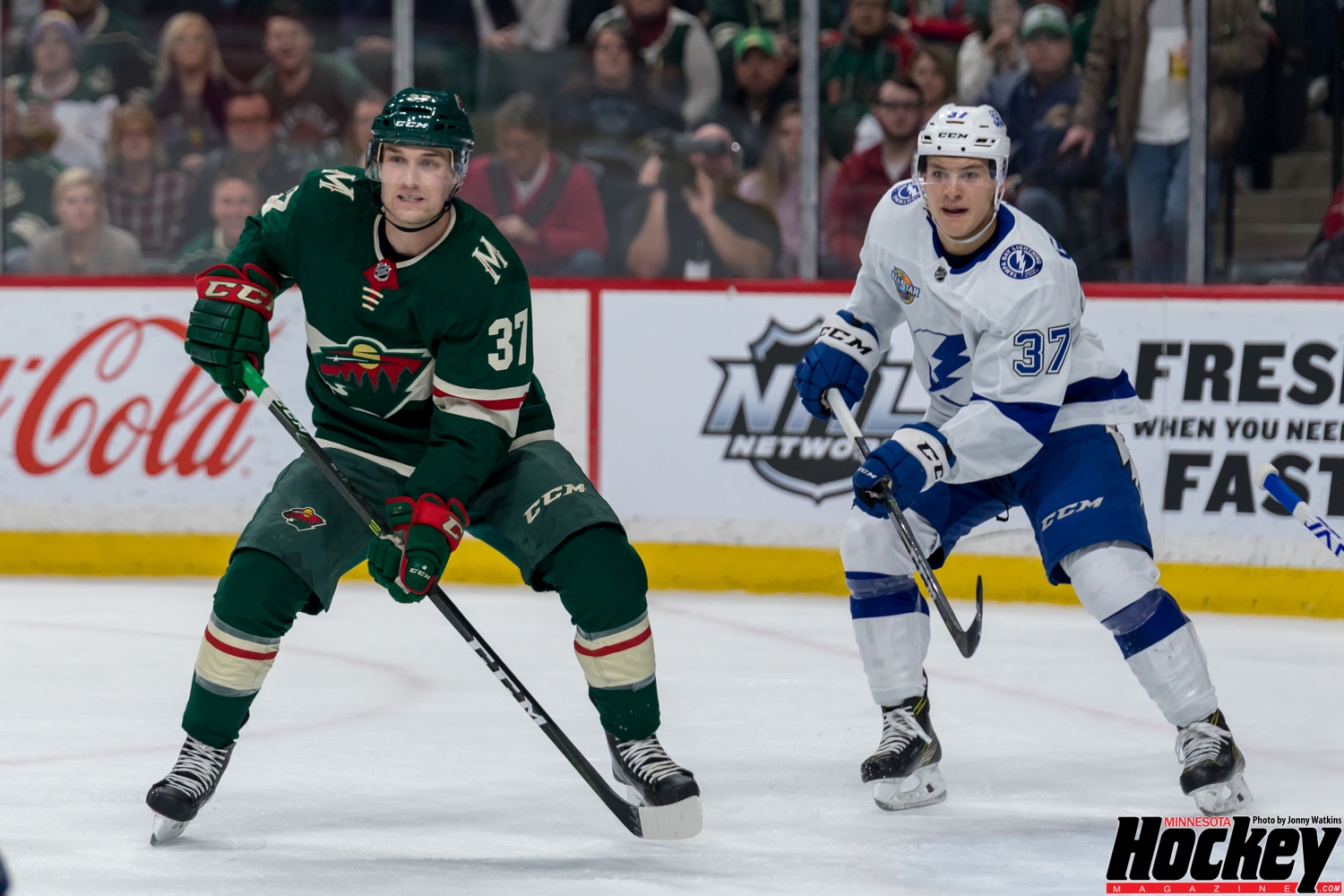 St. Paul, Minn. — The twelfth Hockey Day Minnesota ended at Xcel Energy Center with a 5-2 Wild win over the Tampa Bay Lighting with all four of the team’s Minnesota native skaters getting points.

Nate Prosser’s goal in the second period ended up as his second Hockey Day Minnesota game winner, and Kyle Rau earned a secondary assist on the play during his debut with the Wild.

“Nate loves Hockey Day Minnesota, he’s a point a game player on Hockey Day,” Zach Parise said. “I think you see the excitement from the rest of the team when he scores, and that says it all. He’s very well liked guy on our team, great person, and you want to see guys like that do well.”

Prosser got the crowd going early in the game when he stepped up to scrap with the Lightning’s Ryan Callahan following a hit on Tyler Ennis in the neutral zone. It was a play his coach though the team appreciated, got the crowd even more amped up, and kept the team’s adrenaline going.

Parise was the first of the Minnesota natives to get on the board, tallying his first goal of the season late in the second period by getting a stick on a Ryan Suter shot. Parise said his conditioning and energy has been fine since coming back to the lineup, but tonight was the best he felt handling the puck.

Matt Cullen was the fourth Minnesotan on the scoresheet tonight, when he got his 700th point assisting on Marcus Foligno’s third period goal.

The win came off of a bye week for the Wild and it was a night where they seemed to have the most energy despite an NHL trend of teams struggling their first game back.

“Yesterday’s practice, everyone was upbeat, probably the loudest practice as far as guys being talkative, and the same with morning skate today,” Bruce Boudreau said. “It would have been a crime if they didn’t come out with same energy they did the last two days.”

Rau wasn’t one of the players coming in off a bye, but off of a call-up from Iowa and contributed a simple, smart, intelligent and fast game with the big club. The former Gopher was so excited to play in his sixth Hockey Day Minnesota that he couldn’t settle in for his pre-game nap.

Rau didn’t see much ice in the first period as he settled into the speed of the game with a couple wall battles on the breakout early, but saw a regular shift during the second on a line with Charlie Coyle and Joel Eriksson Ek. Boudreau liked the line and thought Rau stepped in, didn’t look out of place and his speed and intelligence really wore off. The coach didn’t have any special messages for him other than asking how many tickets did he have to buy.

Rau had a bunch of high school buddies in the rink for the game that saw him get 6:56 of ice time, two shots, one assist and ending up plus one for the night.

“Good play by Rauser, he played well tonight,” Prosser said. “It’s just cool that this Hockey Day thing has become such a big deal, all the guys kind of yelling about, Minnesota guys money on the board, stuff like that, we all got up there, big win.”

“When your feet are moving, the rest of your game usually follows and he was skating well,” Prosser said.

Rau became the 24th Minnesotan to play for the Wild during the franchise’s history, his brother Chad Rau is one of the others, and they’re the first pair of brothers to play a game for the Wild. Chad’s debut was on Hockey Day Minnesota 2012, when he scored the game winning goal. The Gopher Hockey alum also became the 21st player from the University of Minnesota to play in the NHL this season, tying Michigan for the most in college hockey.

“I think this is my sixth [Hockey Day Minnesota], so it’s kind of cool to be able to say that,” Rau said. “Then to be able to contribute on the scoresheet obviously that’s something that you want to do.”