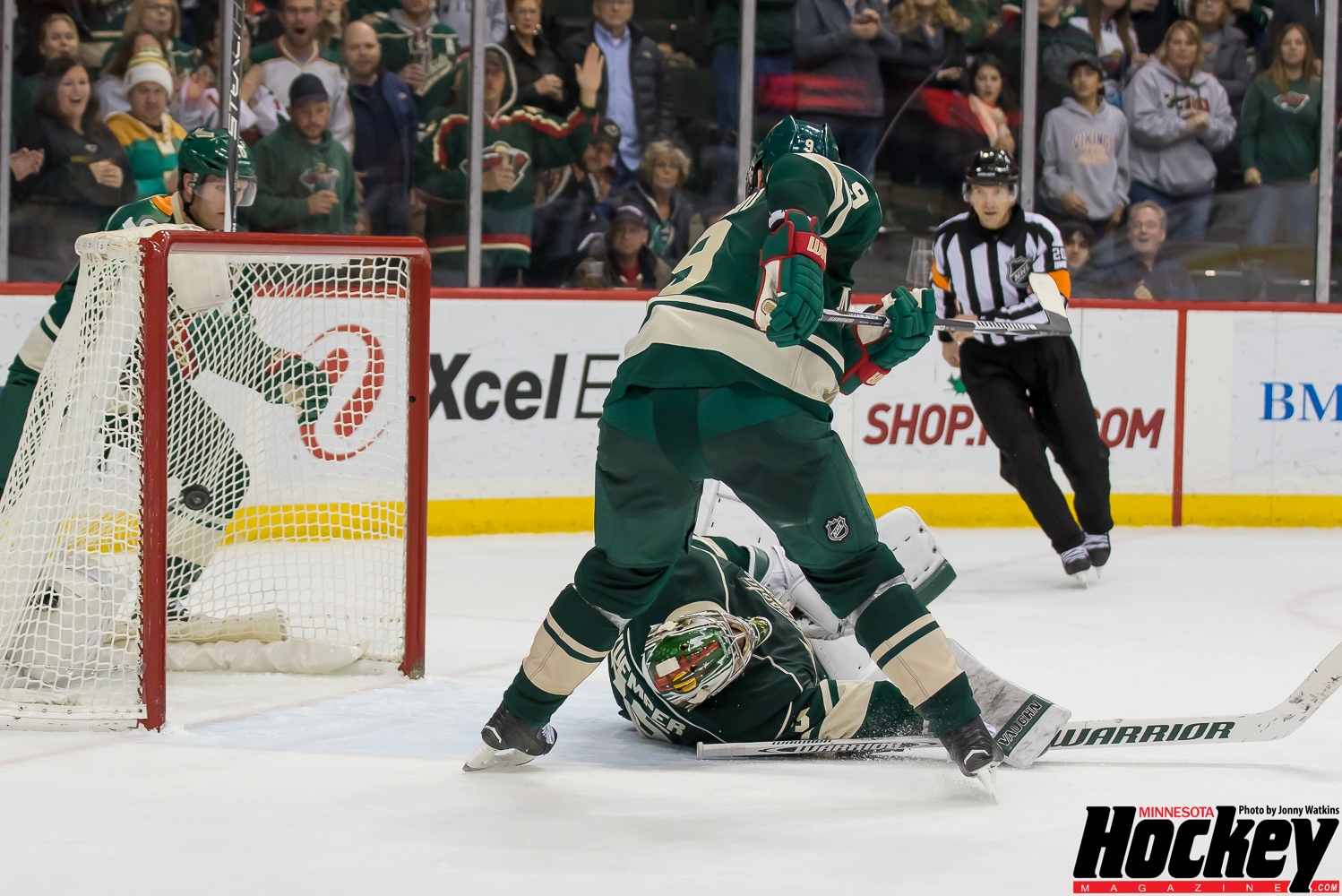 The Wild suddenly appear in imminent danger of pulling a Tom Petty by freefalling through the NHL’s Central Division.

Swoons in December and January have become almost commonplace under coach Mike Yeo over the past few seasons.

Thomas Vanek, who had a goal and an assist Saturday, wasn’t ready to liken this year’s team to the last.

“We’re not in December, yet,” he pointed out.

Unfortunately, however, it seems the Wild are kicking off their struggles a little early. They blew a 3-0 third-period Saturday night and bowed 4-3 in overtime to the Dallas Stars, losing their third consecutive game at the Xcel Energy Center and dropping their record to one win in their past seven games.

Yeo, who appeared livid during a timeout after the Stars tied the score with 5:26 left in the third period, is fully aware of previous mid-season skids by his boys.

It’s a story with bite because the Wild had a lot going for them in front of 19,024 home customers Saturday night: Justin Fontaine returned from a knee injury and chipped in an assist along with some strong play; Darcy Kuemper played in goal for the first time since Oct. 16 and made 40 saves; and Jason Pominville ended his nightmare of a slump with his first goal in his 22nd game of the season to give Minnesota a 3-0 lead.

That goal came after Pominville left the penalty box and drove a shot past the Stars’ Antti Niemi just 1:11 into the second period.

“Boy, what a great 21 minutes and (11) seconds we played,” Yeo said, his voice dripping with sarcasm. “That’s great. Too bad the game didn’t end there.”

Minnesota outshot the Stars 9-7 in the first period and controlled much of the play, grabbing a 2-0 lead on goals by Vanek and Charlie Coyle. But Dallas outshot the Wild 19-8 in the second period and 16-7 in the third.

They grabbed a turnover to score short-handed to cut the deficit to a goal midway through the third period and the Wild were unable to recover.

That, Vanek said, was a stake to the heart.

Maybe, Yeo noted, but not unexpected.

Minnesota’s dressing room emptied in a hurry after this one.

Asked about the atmosphere, Vanek looked around.

“Pretty quiet,” he responded. “There’s not much you can say. The guys know that’s not good enough. Not acceptable.”

Defenseman Ryan Suter, who played 32 minutes, 19 seconds, said a 3-0 lead prompts nearly every hockey team to “sit back” a bit.

“We have to learn from it,” he added. “Obviously it’s disappointing.”

The Wild travel to Chicago for a Tuesday game, then return to the X for games against Toronto and Colorado.

“We’ll see what we’re made of,” Suter said. “See what kind of character we have in here. … We’ve just got to pick it up and see what we have.”

The result left Dallas with a 19-5-0 record while Minnesota limped away with an 11-7-4 mark and a vivid memory of what a winning hockey team looks like.

“They stayed with it,” Yeo said. “Credit to them – great job. That’s why they’re in first place; that’s why we’re not. The teams at the end of the year are not the most talented teams; they’re the teams that play their game and buy in and do things the right way night after night, regardless.”

As happened last year and the year before, Yeo’s guys are reaching a crossroad.

“We’re either going to decide if we’re going to be a good team or a decent team,” Yeo said. “And I think we’re all a little bit tired of being a decent team.”