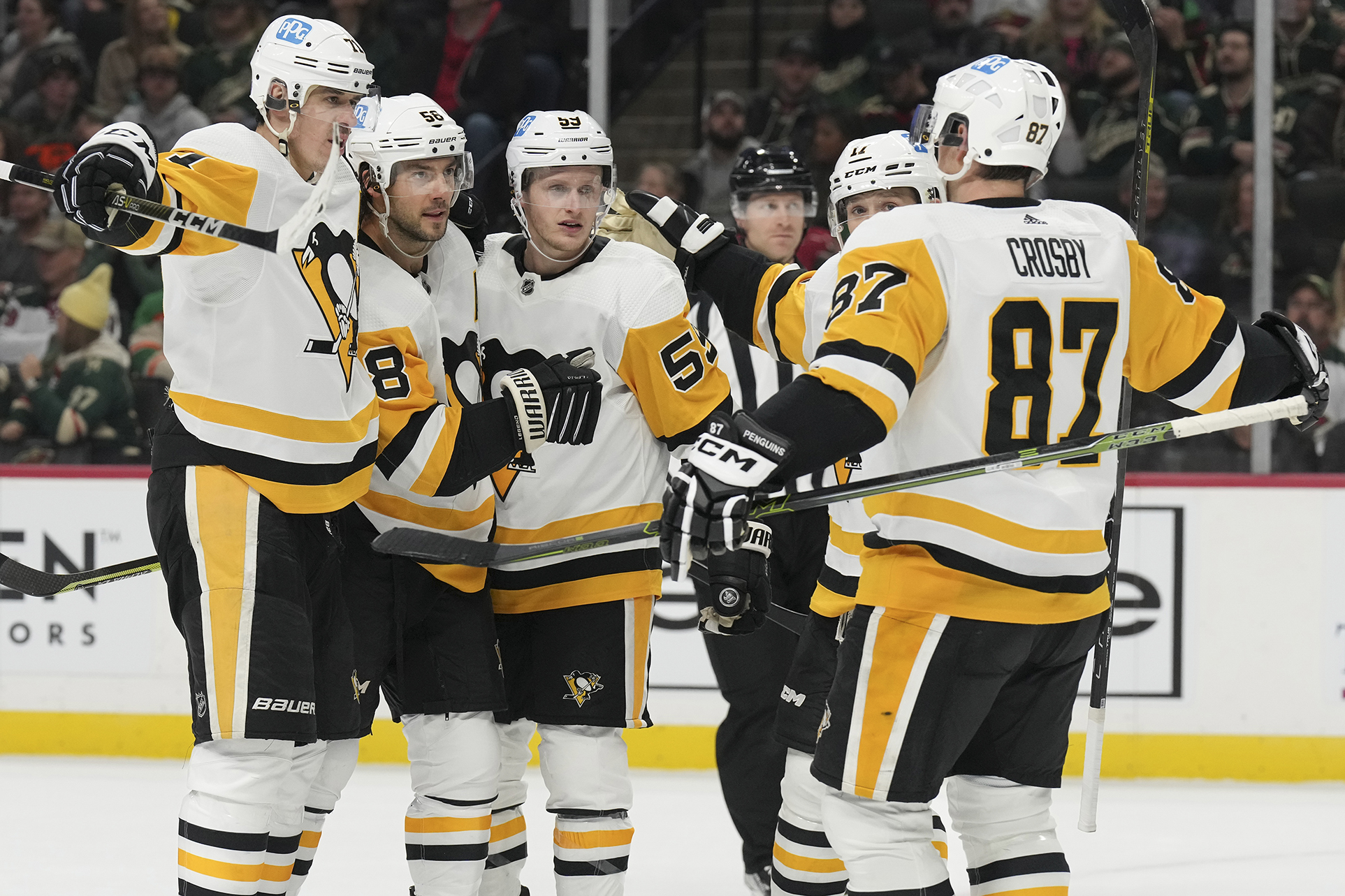 All you need to know about how things are going for the Minnesota Wild is that 17 games into the season the team’s veteran leaders thought it necessary to call a players-only meeting following a 6-4 loss to Pittsburgh on Thursday in the first game of a seven-game homestand.

The defeat against a Penguins team that hasn’t been anything special dropped the Wild to 7-8-2 and tied them with three teams that are a point behind Nashville for the second and final wild card playoff spot in the Western Conference. The Wild’s third consecutive loss also gave them a 2-5-1 record at Xcel Energy Center, a building in which they went 31-8-2 during a franchise-record 113-point season in 2021-22.

“We’re just tired of losing,” defenseman Jon Merrill said. “It’s not something we want to get comfortable with.”

Unfortunately, it’s becoming clear the Wild might not have a choice.

Players can call as many meetings as they want, coach Dean Evason can continue to juggle lines and defensive pairings and Evason and his players can talk all they want about the need to work harder or play smarter. 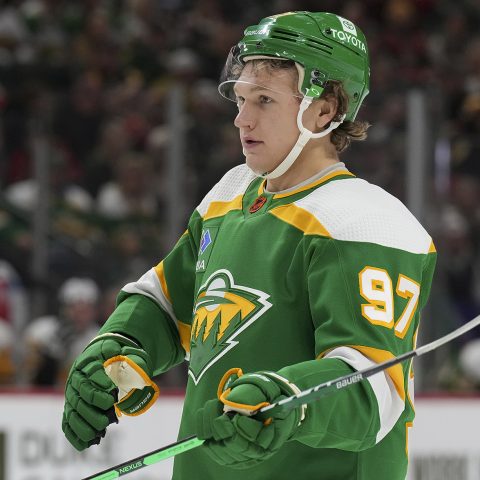 At this point, who could blame Kirill Kaprizov for posting a ‘Help Wanted’ sign in the Wild’s dressing room? (MHM Photo / Rick Olson)

But there is one thing that appears almost certain to remain a problem. This team is going to struggle to score goals. Winger Kirill Kaprizov remains a star player, although he entered Saturday’s game against Carolina having gone four games without a goal. The bigger problem: How much goal scoring depth exists behind Kaprizov?

The Wild doesn’t have anything close to a No. 1 center to put between Kaprizov and Mats Zuccarello, who also is struggling. Frederick Gaudreau had gotten the opportunity, but in practice on Friday he was replaced by Sam Steel, who was listed as the Wild’s fourth line left winger on Thursday. Gaudreau’s hard work has made him a favorite of Evason, but he isn’t qualified to center a first line and moving Steel to that spot amounts to a hockey Hail Mary.

Linemates Joel Eriksson Ek and Marcus Foligno are coming off seasons in which they had career-highs of 26 and 23 goals, respectively. But it would be silly not to expect regression and those two have seen very limited time with winger Jordan Greenway, whose presence with Eriksson Ek and Foligno made up the tough-to-play-against GREEF line. Greenway has appeared in only two games because of injury issues but might be set to return Saturday on a line with Gaudreau and Matt Boldy, who got off to a good start but has no goals and one point in his past seven games.

The Wild hoped that 2020 first-round center Marco Rossi would make a contribution, but he has spent much of the early season on the fourth line and has only one assist in 16 games. Rossi might one day be ready to ascend to the top line, but for right now he is playing between two hard workers in Connor Dewar and Mason Shaw.

All of this leaves one wondering exactly how the Wild is going to get the kind of offense they did last season when they averaged 3.8 goals per game? This season that figure has dipped to 2.8 goals and Minnesota hasn’t scored more than four goals in a game since getting six and losing by one to the Kings in the season’s second game.

The Wild have dealt with injuries but there is no one who is going to return and fix the goal-scoring issue. Greenway had only 10 goals last season. Ryan Hartman scored 34 goals as the center on the Wild’s top line, but that was a career year and he got off to such a rough start this year that he was demoted to wing. It’s also unknown when Hartman will return from an upper body injury suffered in a fight against Chicago in late October.

The obvious missing piece is winger Kevin Fiala, who finished second to Kaprizov last season with a career-high 33 goals and 85 points. Fiala was traded to the Kings during the offseason in large part because of the salary-cap issues the Wild face for the next three seasons due to the buyouts of Zach Parise and Ryan Suter’s contracts in the summer of 2021. Fiala and Boldy formed an immediate chemistry when the latter was summoned from Iowa of the AHL last year but so far Boldy hasn’t found that chemistry with any of his current teammates. 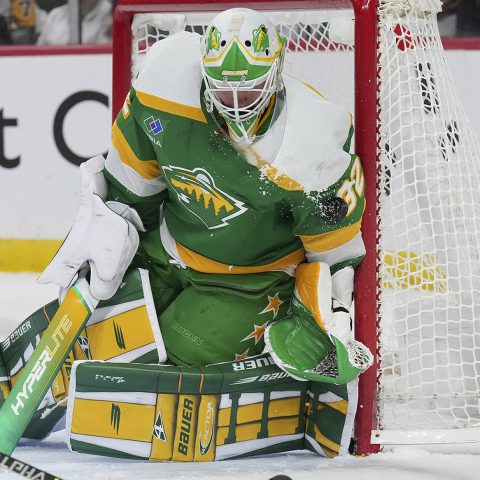 Pinning all of the Wild’s troubles on Fiala’s departure would be an exaggeration of the facts. There are other issues, such as Rossi’s slow start or Tyson Jost having been placed on waivers after he didn’t perform as expected. But there is no question this team misses Fiala, and it doesn’t help that backup  goalie Filip Gustavsson gave up a few terrible goals against the Penguins after Marc-Andre Fleury was placed on injured reserve because of an upper-body injury suffered in Tuesday’s loss at Nashville.

The Wild’s homestand won’t get any easier with Winnipeg and Toronto following the Hurricanes into town. Two of the last three games will provide weaker teams with Arizona and Anaheim bookending a visit from Connor McDavid and Edmonton. The problem is nothing is easy for the Wild and there’s no guarantee that’s going to change anytime soon.

“We want to win,” Eriksson Ek said. “We want to compete and win hockey games. And right now we’re not. If people were happy in here, I would be more worried than right now.”

Being unhappy is fine, but being able to do something about it is more important. Are these Wild talented enough to address their problems with more than words? They better hope so or this could turn into a long winter at the X.