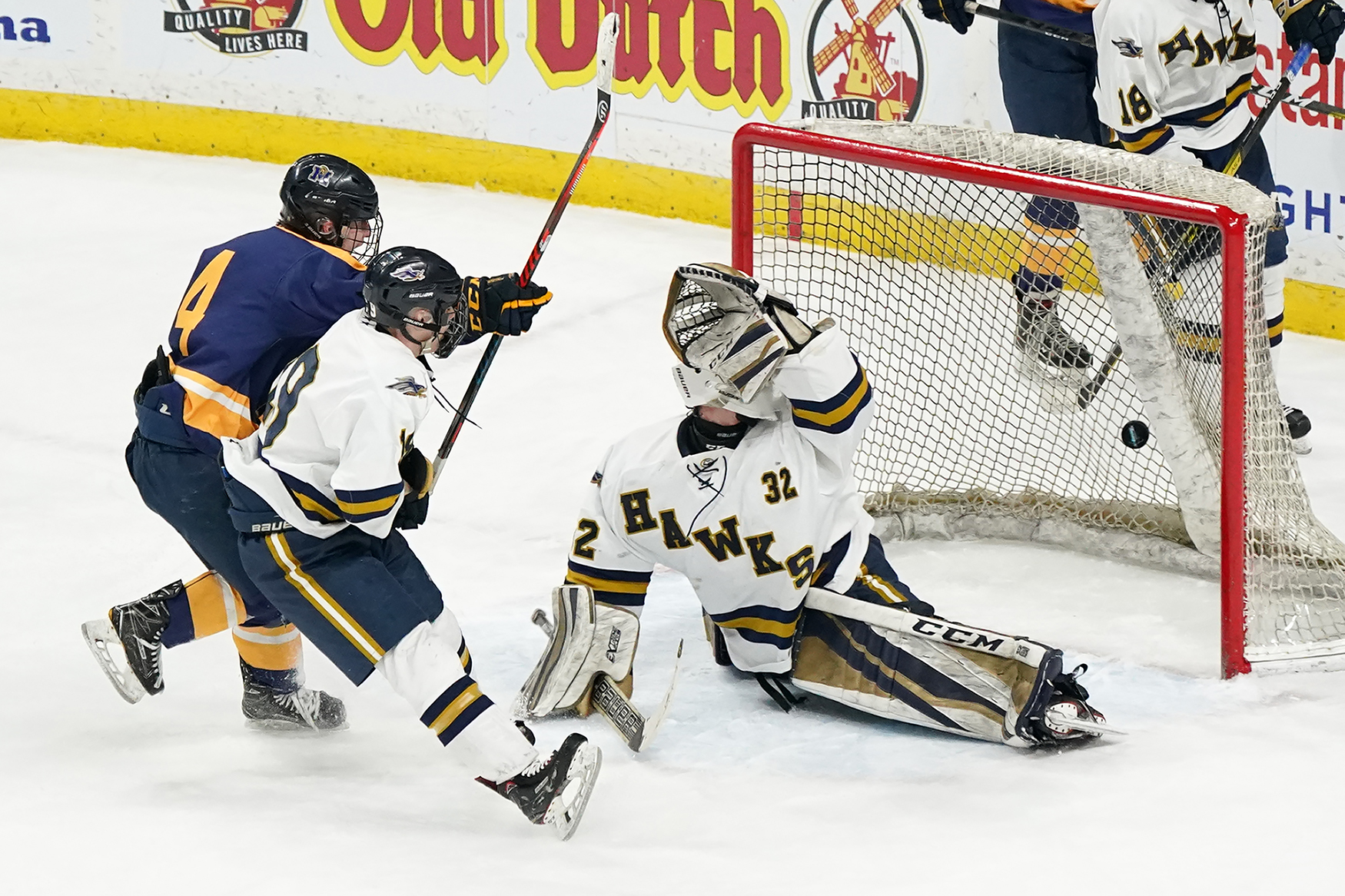 Mahtomedi's Colin Hagstrom (4) watches his game-winning shot hit the back of the net in overtime of the Zephyrs' 3-2 win over Hermantown in the Class 1A final on Saturday afternoon at Xcel Energy Center. (MHM Photo / Rick Olson)

His 11th goal will likely go down as perhaps the biggest of his career.

He buried a shot 2 minutes, 44 seconds into overtime for a 3-2 victory over Hermantown to give the Zephyrs their first boys’ hockey state title.

“I just got the pass from Metzie, and I cut to the middle,” Hagstrom said. “I shot it, and it went in.

Mahtomedi grabbed an early 2-0 lead with a power-play goal from junior JD Metz in the first period and another 1 minute, 47 seconds into the second period from junior Ethan Peterson, with a Metz feed from behind the net.

But from early on in the second period, the ice tilted toward Hermantown’s favor. While Mahtomedi played defense and only registered one more shot on goal the entire period, Hermantown pressured to get on the board. Senior Drew Sams made it 2-1 at the 11:41 mark of the second on a shot that got through traffic and appeared to go in off Metz in front.

“We came to play in the second half of the game,” said Mr. Hockey finalist, Hermantown senior Blake Biondi.

The play was similar in the third period, as Hermantown outshot Mahtomedi 23-3. They peppered Mahtomedi sophomore goaltender Ben Dardis with shots without getting rewarded for their efforts. 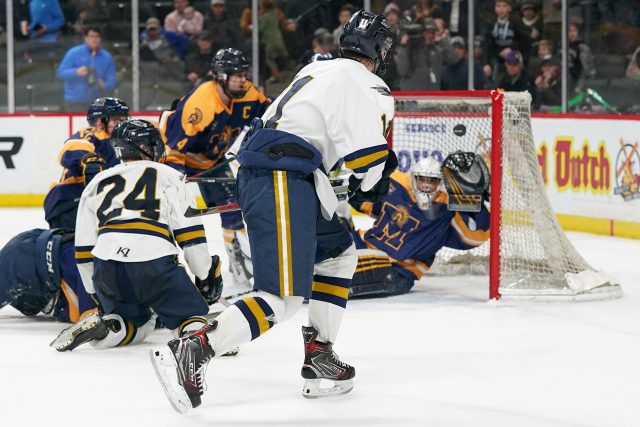 It looked like the game would end there. But with 21.2 seconds left in regulation, junior Aaron Pionk tied the game. It was confirmed to be a good goal after video review, as players were crashing the net and a Hermantown player ended up in the crease.

The explanation Mahtomedi coach Jeff Poeschl received from officials on the goal was that the player in the crease did not significantly interfere with the goaltender.

“I lost my mind,” Pionk said, when the goal was confirmed. “I think I knew it was in right away.”

Giving up the tying goal so close to the title in regulation might be enough to frustrate or deflate a team like Mahtomedi. Metz said they “were definitely a little stunned,” but Poeschl said his players weren’t down in the brief break before overtime.

Mahtomedi went back out and put two shots on goal in less than three minutes of overtime – the same number of shots it had in the second period – it just so happened that one of them found the back of the net.

Dardis finished the game with 40 saves and a state championship. Andrews didn’t know what more his team could have done against him.

“It was a clinic on how to play goalie,” said Hermantown coach Patrick Andrews. “Hats off to the Dardis kid.

“To tie that thing up when I didn’t know if we’d ever get another goal on that kid. He played out of his mind.”

Poeschl said his team executed its game plan, knowing it wasn’t “going to be able to go toe-to-toe with Hermantown” and win a track meet type of game.

“Even though the puck was in our end an awful lot tonight, we knew that that was the kind of game that we were going to have to play,” Poeschl said. 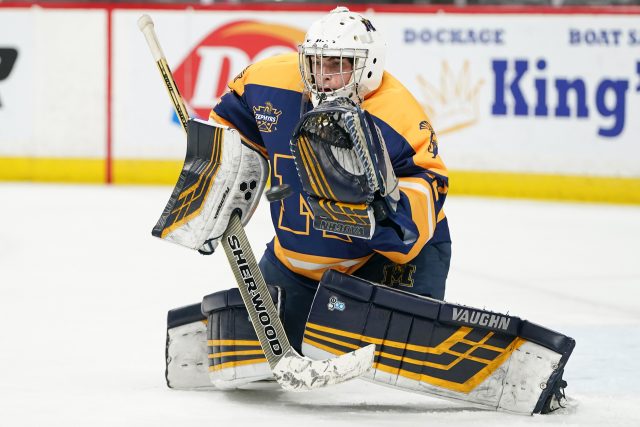 Hagstrom and teammate Nikolai Dulak, who had two assists in the game and five for the tournament, were the only two seniors this year who’ve played on the varsity squad all four years of high school. Their teams went to four state hockey tournaments, always coming up empty except for this final time.

This year’s title didn’t come without a setback for Hagstrom, however. He missed six-to-seven weeks in the middle of the season with a broken fibula, returning Jan. 28. He scored 11 goals and 19 points in 18 games this season, with the championship game-winner no doubt ranking at the top.

At first, the doctors didn’t know if he’d be back on the ice this season.

“I had to support my team,” Hagstrom said. “I told myself there was no way that I wouldn’t come back.”

Hagstrom also received the Herb Brooks Award following the game, one presented to him on the ice by his former Mahtomedi teammates, Tom and Joe Paradise, who graduated last year.

“The Herb Brooks Award is a snapshot of Colin,” Poeschl said. “He persevered. He was at every single practice. Every team meeting. He was on the bench filling water bottles. When he had a boot on, he’s shooting pucks.”

Hagstrom scored eight of his 11 goals this season since his return, including a goal in each state tournament game, adding a pair of assists as well.

He was part of the effort that helped Mahtomedi make the most of its opportunities in its final two games of the year. In the semifinal in which it knocked off top-seeded Warroad, Mahtomedi scored five goals on 12 shots. Saturday, the Zephyrs had their two goals on only six shots.

With the Zephyrs winning, it also marks the first time since 2004-07 that there have been four different Class 1A champions in a row. From 2017-20, it’s been Hermantown, Orono, St. Cloud Cathedral and now Mahtomedi.

Poeschl has led plenty of teams to the tournament in his 23 years coaching at Mahtomedi, but a title was worth the wait.

“I’m just happy for these guys that they can make history in Mahtomedi hockey,” Poeschl said. 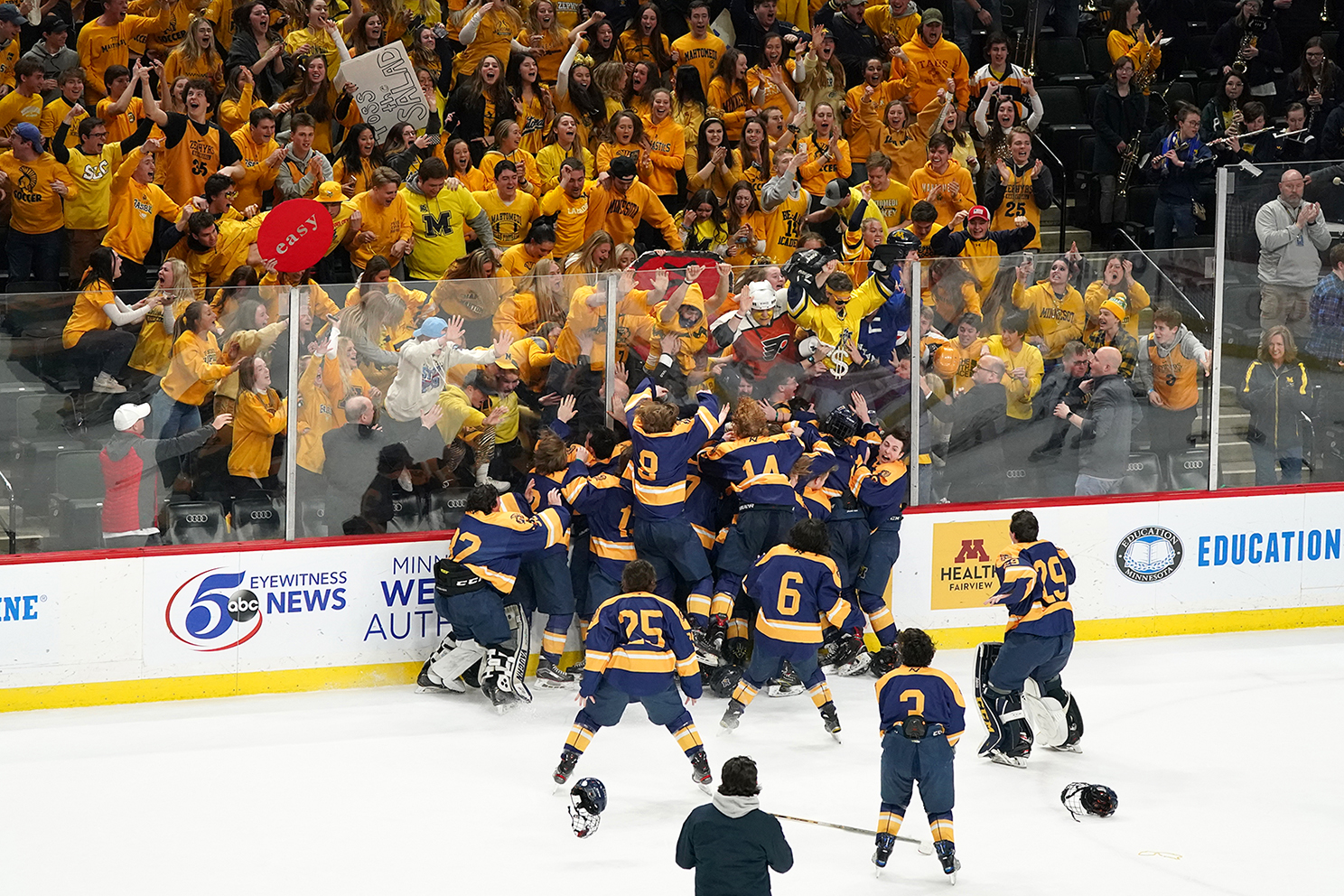