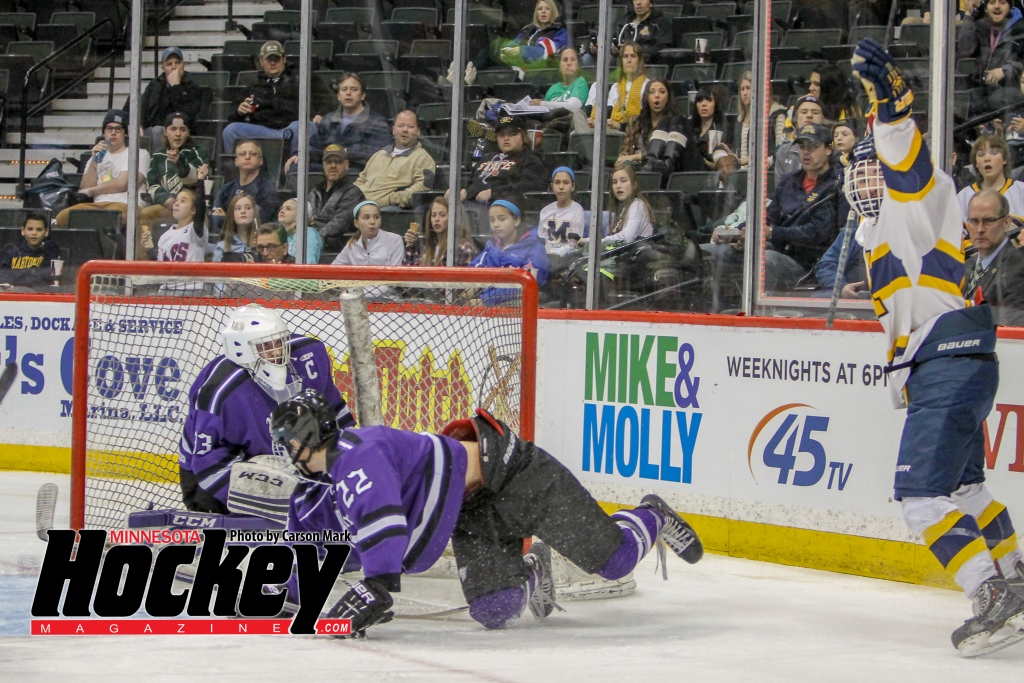 St. PAUL — The Mahtomedi Zephyrs used a hat trick from junior Jack Becker to propel them to a 6-3 win over New Ulm in Wednesday’s Class 1A quarterfinals at the Xcel Energy center. The Zephyrs scored first and never let the Eagles get ahead, outshooting them 37-25.

Though both coaches agreed the game was tighter than the final score indicated.

“The guys in the locker room know that we’re a good hockey team. Much better than we were today.”

The No. 2-seeded Mahtomedi team (25-2-2) had all it could handle from New Ulm (18-9-2), especially early in the third period when just 40 seconds in, New Ulm senior Colin Huffman closed the gap to 4-3. New Ulm seemed to have the better of the play because of Mahtomedi’s turnovers, Poeschl said, adding that his team struggled while New Ulm battled hard.

“I actually thought we settled down a little bit,” Poeschl said, referring to when the score reached 4-3. “The feeling on the bench was not ‘oh no.’”

In a 1-1 tie after the first period, it took Becker nine seconds into the middle frame to get his first goal of the game. He capitalized on a defender fanning on a pass in the New Ulm zone. Becker intercepted in front and scored.

“I was just pressing the D man,” Becker said. “I just kind of got lucky.”

About four minutes later, the Eagles found themselves on the receiving end of another unlucky play. Mahtomedi senior Kellen Campbell drove to the net for a shot, which was initially saved by New Ulm senior goaltender Matt Berkner. But the puck went over the line when a defender crashing the net slid into his goalkeeper.

Then came Becker’s second goal, a shorthanded tally on a play where he jammed the puck behind the goalie. He tried to bank it in and said that, again, he got lucky.

“The puck kind of jumped out to me,” Becker said.

Mahtomedi’s Jack Gunderson also had a pair of goals, scoring in the first and then giving his team breathing room in the third, going up 5-3.

Becker’s final goal, bringing his season total to 28, came late in the third on the power play. Special teams were a factor in the game, as New Ulm went 1-for-4 with the man advantage, and Mahtomedi went 1-for-2.

It was “by far” the best showing at state from the New Ulm players, their coach Erik Setterholm said.

“They don’t quit,” he said. “They haven’t quit all year. It was a really good showing.”

Senior Jon Kopacek’s effort on New Ulm’s second goal with 1:20 left in the second. He got the rebound and, down on the ice near the goal line, reached his stick out for a sharp-angle shot.

“It was pretty cool scoring here,” Kopacek said. “Just dove for it trying to make a play. When you’re playing here, you have a little extra step.”

Looking ahead to Friday’s semifinals, Mahtomedi will go to work in practice Thursday and have some team and individual meetings, coach said. This state tournament marks Mahtomedi’s eighth overall appearance but first since 2010. The Zephyrs are looking for their first state title.

“I think it’s really more of a head and a heart issue,” Poeschl said.