Northfield boys follow up girls with historic run of their own 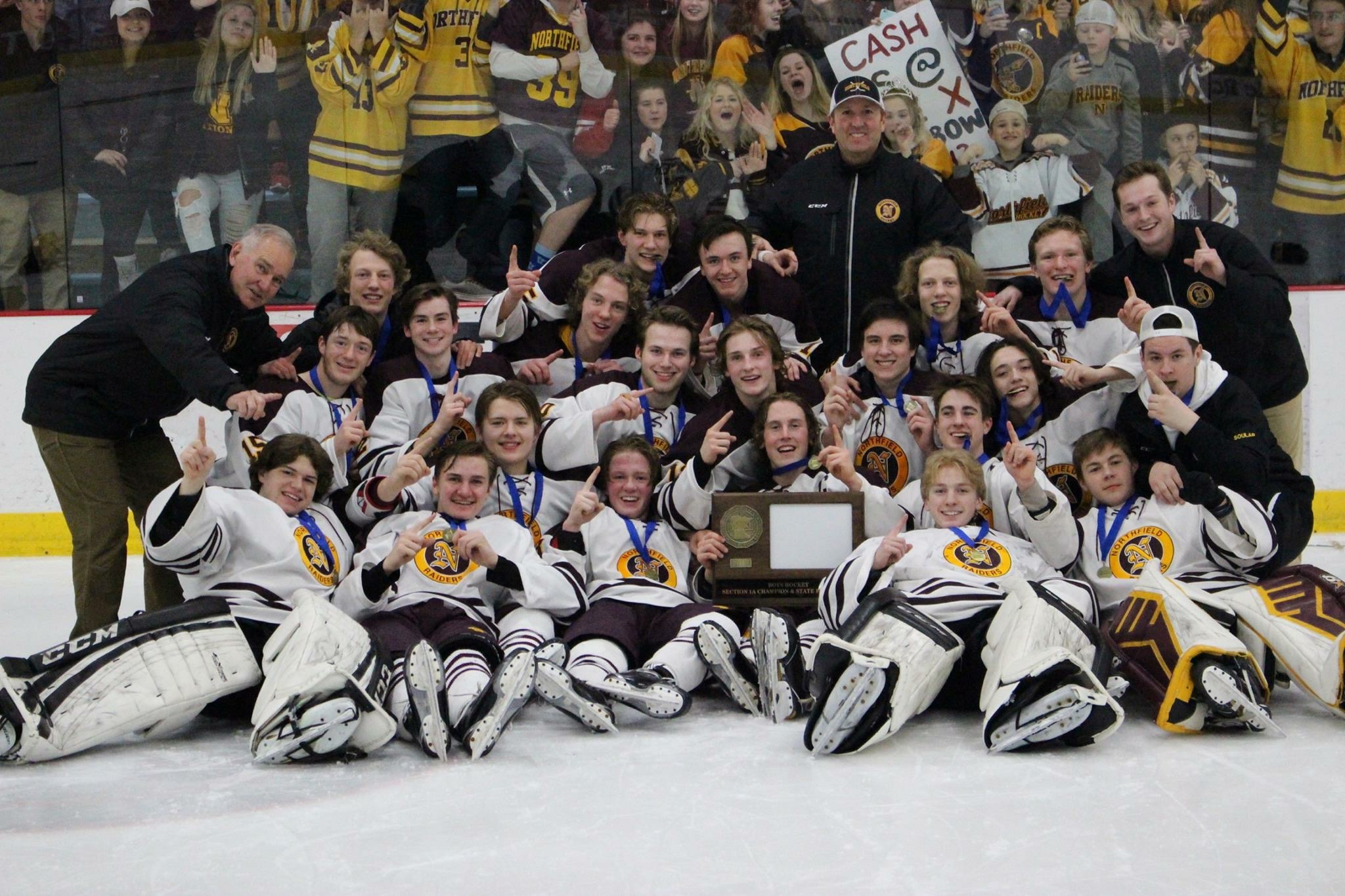 Northfield boys follow up girls with historic run of their own

No matter what happens this week at the 2017 Minnesota State Boys’ Class 1A Hockey Tournament, the 2016-17 Northfield High School Raiders hockey team will have accomplished a feat none of its predecessors or its successors can ever claim: They were the first.

The Raiders became the first boys’ hockey team in school history to advance to the state tournament. After falling in the section final for three straight seasons, and four of the last six, top-seeded Northfield (20-5-3) finally captured the elusive Section 1A title with a 3-2 double-overtime win over Red Wing on March 1.

“It didn’t really soak in until, I think, just these last couple of days. I’ve finally been able to look at it and know that we are in the tournament.” 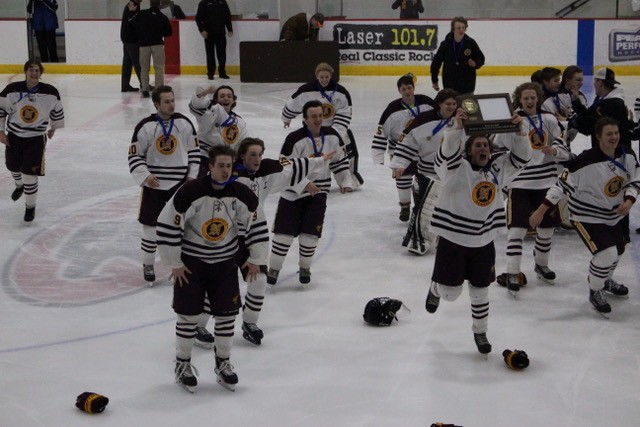 Grant Sawyer scored twice, including the game winner 20 seconds into the second overtime, while Bielenberg stopped 13 of 15 Red Wing shots in the historic win for Northfield and third-year coach Mike Luckcraft.

“It was a crazy game,” Luckraft told The Northfield News after the win. “The pressure builds each time you get to the finals. We played hard and deserved it. We are extremely thrilled to finally win. The kids are excited, coaches excited and I am sure there are a few fans who may be excited.”

The Raiders were the top seed in Section 1A a year ago as well, but like so often happens to a team not accustomed to a target on its back, Northfield couldn’t break that final barrier and fell to second-seeded Mankato West 1-0 in the final.

“After two years of losing, everyone on the team was definitely more focused,” Bielenberg said of this year’s Raiders.

Bielenberg confesses he knows very little about third-seeded Mahtomedi, Northfield’s 1:00 p.m. quarterfinal opponent on Wednesday, but says there are similarities between the Raiders and the Zephyrs.

“They have a good goalie and they have a deep team and that’s kind of what we have too.”

Northfield, a quiet Southern Minnesota college town 40 miles south of Xcel Energy Center is experiencing an epidemic of state-tournament fever. The boys begin play on Wednesday just two weeks after the girls’ varsity made its second trip to St. Paul in two seasons, the first two in school history for the girls.

The fifth-seeded Northfield girls (20-8-3) also eliminated Red Wing in the section finals and advanced to the Class 1A third place game before losing to Warroad 6-2.

The Bielenberg family had a hand in that bit of Northfield hockey history as well. Ryan’s father Brent just completed his 17th season as the head coach of the Raiders’ girls program and his sister Rachel served as the team’s backup goaltender as a sophomore this season. Older sister Aleisha played four years for Northfield as a forward (2010-2014) after spending time in goal as a youth.

“It’s a little surreal,” said Brent Bielenberg, the 2017 Minnesota Girls Hockey Coaches Association Class 1A Coach of the Year. “Last year it was just so disappointing that [the boys] didn’t get there and it makes this year that much more satisfying. I think it’s harder as a dad than it is a coach.”

Brent can appreciate how difficult it can be just to get into the tournament, both as a coach and a player. Brent grew up in Stillwater and backstopped the Ponies to the section final against White Bear Lake as a junior in 1989. But the Bears prevailed 4-3 in overtime and Stillwater waited another 25 years before making its state tournament debut.

Brent, whose father and brother also tended goal for the Ponies, spurned an offer from the USHL’s St. Paul Vulcans and instead enrolled at St. Olaf College where he played four years for coach Whitey Aus. That’s where he met his now wife, Kiwi, and the couple was married after graduation. They have called Northfield home ever since. 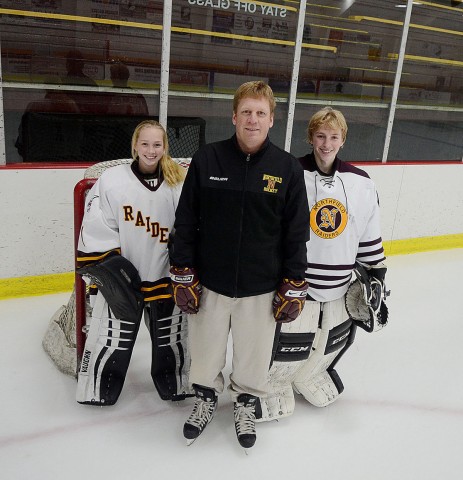 It’s only natural to attribute the fact that Ryan and Rachel strap on the big pads every day to their father playing the position growing up and through college. But the sibling netminders say dad’s influence had little to do with the passion they developed for the position.

“I think our team just needed a goalie,” Ryan said. “I just kept playing and I liked it so I stuck with it.”

Rachel got started because her 8 and under team, like so many at that age group, had a system of rotating players through the position and her fondness for it grew from there.

“I think there was a small part that was like I was kind of extra excited to try it because my brother was a goalie and I was young and looked up to him,” Rachel admitted.

“We joke like maybe it is genetic but I just wanted them to play,” Brent said. “I let it be their decision.”

Both young goalies, however, say they enjoy the fact that their father’s familiarity with the position allows him to relate to them and the unique psychological challenges they face in the goal crease.

“I think with goalies you want that even keel mentality which Ryan is to a tee and Rachel is just kind of growing into that,” Brent said.

The Bielenberg siblings combined to pull off a rare dual achievement on a Thursday night this past December.

The Northfield boys traveled to Austin for a Big 9 Conference meeting with the Packers with Ryan making 21 saves to post his first shutout of the season in a 2-0 Raiders win. Meanwhile, 70 miles away back in Northfield, the Raider girls were hosting Austin and treated the Packers to a 7-0 loss behind Rachel’s 14 saves.

Brent began an unsuccessful attempt to re-schedule the girls’ game that night back in the summer but had to settle for text exchanges between he and Kiwi to keep each other informed.

“It was kind a cool parent thing to reflect back on,” Brent said. “It was a big night I think for both of them.”

“It didn’t really hit me that it was a big deal until the next day when a teacher was talking to me about it,” said Rachel, who finished the season 7-0-1 with a 1.26 GAA, a .919 save percentage and that ironic shutout in her backup goalie role with the Raiders.

Rachel, who spent the past two state tournaments on the Northfield bench can’t offer much to her older brother in terms of game-play advice, but she recommends he soak up all of the atmosphere he can while he’s at the tournament.

“It’s a little different with backing up but it also just makes it that much greater, too, in a weird way,” Rachel said. “I’d love to play but it’s also just so great being around with the team and just really taking it all in.”

“I’m not nervous at all, I’m just excited to play in it,” Ryan said. “I know once I start playing and make the first save it’ll just be like any other game really.”

“He just doesn’t get nervous that often,” Brent said of his son. “He takes everything in stride and I think he just looks at it like once it starts it’s just another game, it doesn’t matter where it’s at or what it’s for.”

With a 5-0 victory over Mankato West on Feb. 18, Ryan became the all-time winning goalie for Northfield boys hockey. Not that he was counting, of course.

“I didn’t even know but, after our last game, my coach told me,” Ryan said. “It was cool to be on a really good team for three years; I’m pretty lucky.”