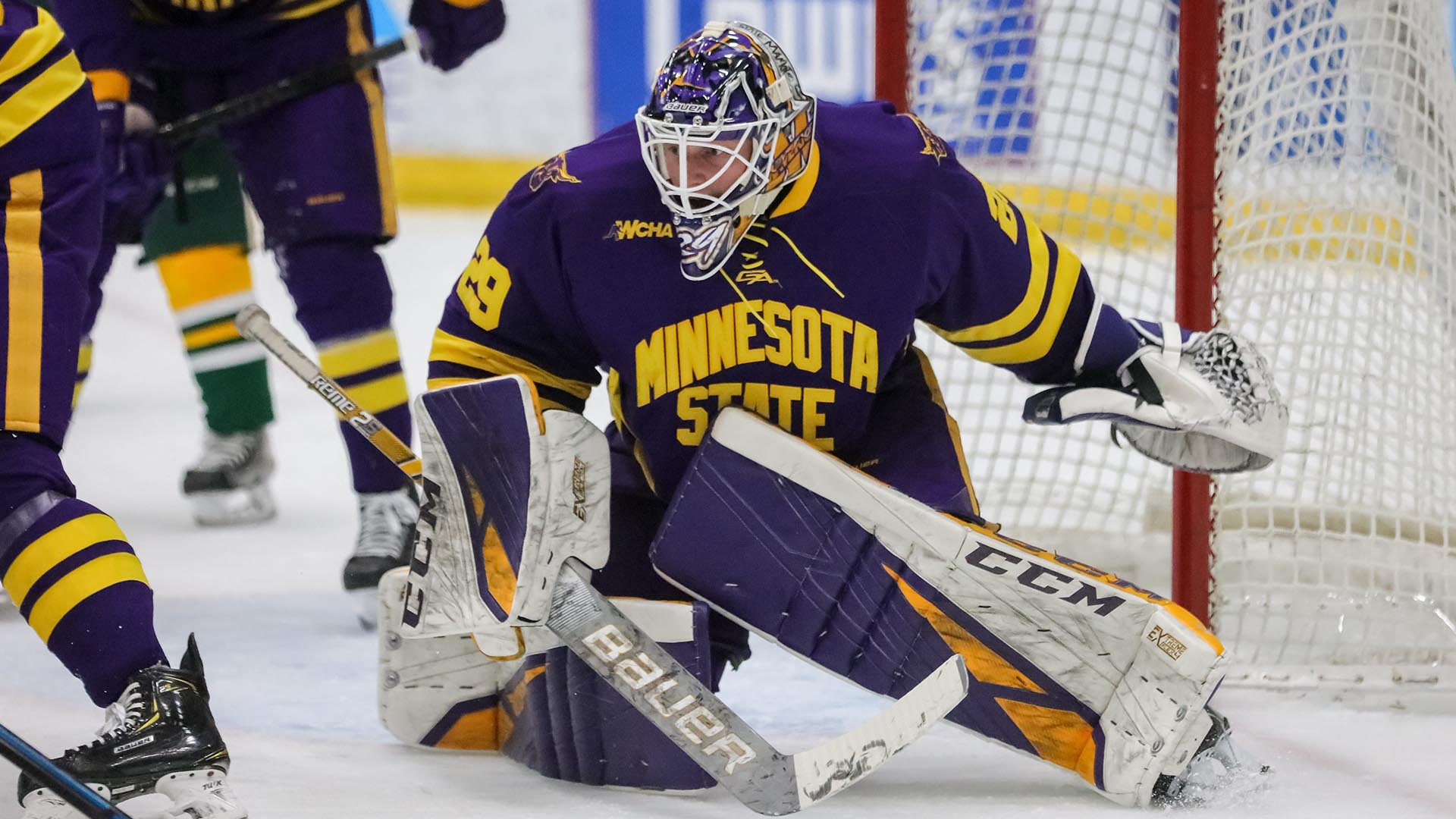 Minnesota State's Dryden McKay has been named a Hobey Hat Trick Finalist for the 2020-21 Hobey Baker Award. McKay, the WCHA Player of the Year and WCHA Goaltender of the Year, has helped lead the Mavericks to the program's first-ever appearance in the NCAA Frozen Four. Photo courtesy of Minnesota State University Athletics.

Storylines at this year’s Frozen Four will be as numerous as shots on goal, with Minnesota’s three best surviving college hockey teams all in Pittsburgh participating in the 2021 NCAA men’s hockey tournament.

In a record-breaking year for success, all five Division 1 college teams in Minnesota made the 16-teams selected by the NCAA to play in four regionals, with two-time defending champion Minnesota-Duluth forced to play in Fargo at the Midwest Regional where No. 1 ranked North Dakota was top seed, while Big Ten playoff champion Minnesota was the No. 1 seed at the West Region in Loveland, Colo., where WCHA season champ Minnesota State-Mankato was also positioned and won the final. In the Northeast Region, Bemidji State earned the right to play from the WCHA, as the fifth team from Minnesota.

The only interloper is Massachusetts, better known as UMass, in a return to the Frozen Four where they lost a 3-0 final to UMD two years ago in the last Frozen Four before the pandemic shut things down a year ago.

In an amazing display, all five Minnesota teams won their opening regional semifinal games, including Bemidji State’s huge 6-3 upset over Big Ten regular-season champion Wisconsin. The game was 5-1 midway through the third period before the stunned Badgers got two late goals. That sent the Beavers into the Bridgeport, Conn., region final, where they were struck down 4-0 on a pure hat trick by Carson Gicewicz and the shutout goaltending of Filip Lindberg.

In a cruel twist, Gicewicz and Lindberg were among four UMass players ruled out of the Frozen Four by positive tests for COVID-19, so they will be unable to help their team against UMD.

In the West regional, Minnesota jumped to a 3-0 first-period lead and cruised past Nebraska Omaha 7-2 behind two goals from Mason Nevers, while MSU-Mankato needed a sensational finishing rally to squeeze past Quinnipiac 4-3 in overtime in the other semifinal. Mankato trailed 2-0 after one, cut it to 2-1 on a goal by Jake Jaremko in the second, but fell back behind 3-1 midway through the third. Nathan Smith cut it to 3-2 with a goal for the Mavericks at 14:54 of the third, and with star goaltender Dryden McKay pulled for a sixth attacker, Cade Borchardt tied it with 1:02 remaining. The game went to overtime, and after 11:13 had elapsed, Ryan Sandelin — son of UMD coach Scott Sandelin — battled to the crease to score after spotting a loose rebound, for a 4-3 triumph.

On Sunday, MSU-Mankato, the pride of the WCHA, took on Minnesota, the last remaining hope of the Big Ten, which has yet to convince other college leagues that it has reached parity. That quest remains, because Mankato completely squelched the Gophers in Loveland, Colo., scoring two minutes apart in the first period as Ryan Sandelin set up Sam Morton’s opening goal, then scored himself for the 2-0 jump-start. There was no scoring in the second period, but goaltender Dryden McKay kept the Gophers off the board, and goals by Nathan Smith and Dallas Gerads in the third carried the Mavericks to a shocking 4-0 triumph.

It’s fitting, in a way, that the proud WCHA and all its 37 NCAA champions since 1951 will end its days as the top men’s conference in the country with one last representative heading for the Frozen Four. The league will cease to operate men’s hockey next season as a third uprising will see the formation of the “new” CCHA, following departures that started the Big Ten and NCHC operations. 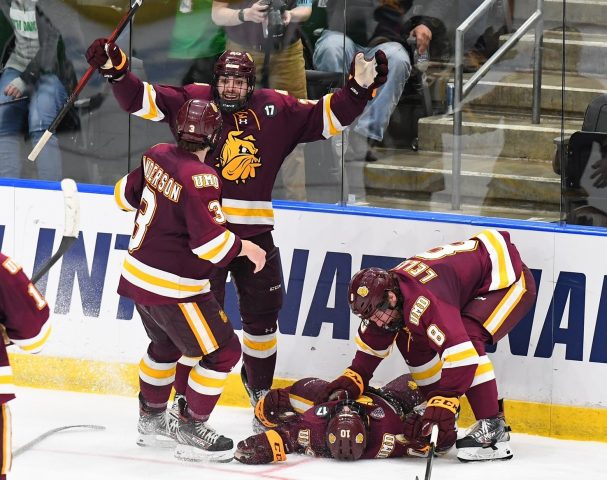 Minnesota Duluth’s Kobe Roth (10), Hunter Lellig (8), Jackson Cates (20) and Matt Anderson (3) rejoice in what was thought to be Roth’s game-winning goal in the first overtime of the Midwest Regional Final. The joy was short-lived as the goal was reversed upon review. But the Bulldogs would have the last laugh, however, on Luke Mylymok’s winner four overtimes later.
Photo by Russell Hons

The NCHC, won by North Dakota in both regular season and playoffs, will have great camaraderie as well as solid representation from UMD and St. Cloud State. Scott Sandelin takes his UMD Bulldogs to their unprecedented fourth straight Frozen Four, in quest of their third consecutive championship. St. Cloud State is coached by Brett Larson, who twice assisted Sandelin in building two of those UMD champions.

The Huskies went to the East region and earned their way to the Frozen Four by dispatching Boston’s top two rivals in Albany. St. Cloud State spotted Boston University a 1-0 second-period lead before Micah Miller and Nick Perbix scored retaliatory goals, and after BU tied it 2-2, Easton Brodzinski broke the tie with a goal for a 3-2 St. Cloud lead. In the third period, the Huskies finished off the Terriers with precision, as Finnish imports Jami Krannila and Veeti Miettinen scored goals, sandwiching the second goal of the game by Brodzinski for a 6-2 victory. BU threatened, getting a major power play, but Krannila got hauled down on a short-handed breakaway and scored on the ensuing penalty shot.

That victory sent St. Cloud State back to Times Union Center to face top seeded Boston College, which took a 1-0 first-period lead on a goal by Matt Boldy, who was to sign an NHL contract with the Wild a few days later. The Huskies facilitated that move by burying the Eagles under a 3-goal barrage in the second period. Luke Jaycox, Will Hammer and Nolan Walker connected for a 3-1 lead, and Micah Miller scored his second in two days in the third period to clinch a 4-1 victory.

That will send St. Cloud to its first Frozen Four, where the Huskies will face off against Mankato, its biggest rival through the years in all sports, especially basketball and football, until hockey took both programs to Division 1.

UMD got an unexpected boost in Fargo, when Michigan was forced to drop out of the tournament with an outbreak of COVID-19 — leaving UMD without an opponent in the semifinals. North Dakota, meanwhile, crushed American International 5-1 in the semis and stormed back to Scheel’s Arena in Fargo for the showdown against UMD.

The game was called by many the best-played game of the season, and it took on legendary proportions when UMD broke a scoreless tie in the third period with goals by Jackson Cates and Cole Koepke barely a minute apart. Goaltender Zach Stejskal made the 2-0 lead stand until the closing two minutes, when the Fighting Hawks pulled their goalie and scored twice for a 2-2 tie that forced overtime. Make that “overtimes,” because they played into the fifth overtime before little-used freshman Luke Mylymok raced end to end up the left boards and sent a pinpoint shot between the legs of a screening defenseman and through the legs of goaltender Adam School for a 3-2 victory that ended the longest game in NCAA tournament history — 142 minutes and 13 seconds, spanning 6 hours and 12 minutes.

For more storylines, Stejskal made 57 saves before severe cramps knocked him out in the fourth overtime, and fellow-rookie Ryan Fanti stepped in to make six more saves in 17:36 to close out the game. 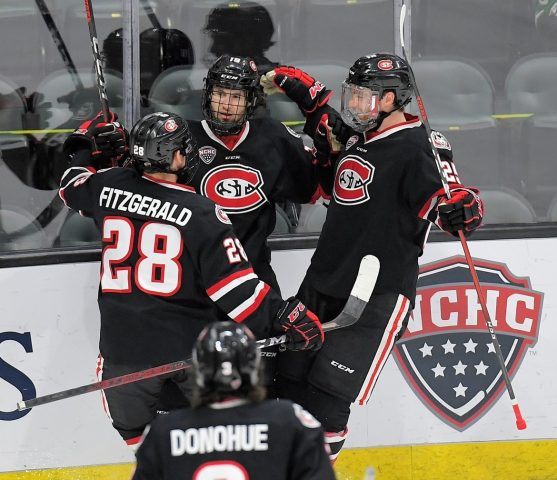 In St. Cloud’s victory, scoring leader Easton Brodzinski was carrying the puck when a BC player delivered a hard, legal, but blindside hip check that dropped Brodzinski to the ice. He was helped to the bench and the dressing room, and then an Albany hospital where the injury was diagnosed as a fractured leg, to end his senior season on the sidelines. The Huskies vowed to keep going in the name of their fallen senior leader, and whipped BC as evidence.

“The toughest part is for him,” said coach Larson. “Here’s a guy who has poured his heart and soul into our program, and now he can’t be part of it. Our guys all know we want to do it for Easton, and all have bought into it a little bit more.

“Nobody picked us to be in the top 20 at the start of the year,” Larson added. “We knew it would be tough, because the NCHC is the toughest league in college hockey. We played North Dakota when we had our first nine games in the pod, and we played Duluth seven times. All of that helped prepare our resilience, and we didn’t ever get rattled.”

MSU-Mankato’s victory over Minnesota was its seventh in a row against the Gophers, spanning the years when the WCHA teams branched off and now the five Minnesota colleges play in three different conferences.

UMass goaltender Filip Lindberg was the seventh-round draft pick of the Wild in 2018, and he finished his senior year with a 9-1-4 record in Hockey East, where he led the league with a 1.33 goals-against average, and he led the league and the nation with a .946 save percentage. Gicewicz, a senior who transferred to UMass from St. Lawrence, wound up with 17 goals and 24 points after his hat trick against Bemidji State. The loss of the quarantined players leaves only senior Matt Murray as a goaltender. He went 9-4 in 13 of the first 15 games, with a .913 save percentage.

Coming out of the NCHC’s season-opening pod in Omaha, UMD faced St. Cloud State in four consecutive games, with UMD winning 4-3 in overtime and losing 3-1 at St. Cloud, then heading North, where St. Cloud State swept, winning 4-3 and then 1-0 in an overtime classic. The teams concluded the regular season with another series, with the Bulldogs winning a 5-1 blowout at AMSOIL Arena before St. Cloud State blew a 3-0 lead but won 4-3 in overtime at the Herb Brooks National Hockey Center. They weren’t done yet, as they collided again in Grand Forks in the NCHC playoff semifinals, with Chase Brand’s short-handed goal standing up to give the Huskies a 3-2 victory.