Man on a mission 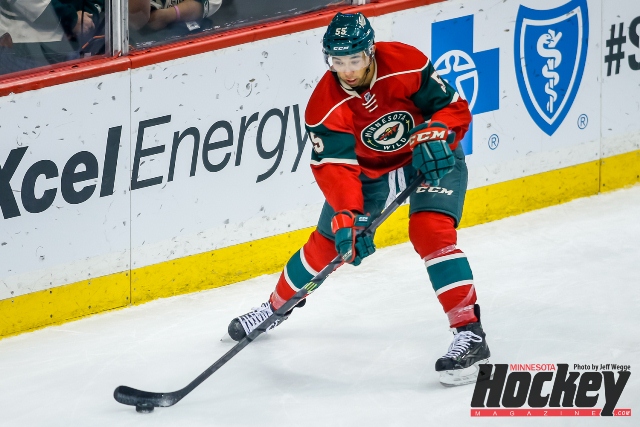 DES MOINES – On Nov. 29, the Minnesota Wild assigned defenseman Matt Dumba to the Iowa Wild. The next night he played his first AHL game since May 4, 2013 in the Calder Cup Playoffs against the Grand Rapids Griffins as a member of the Houston Aeros.

Since joining the Iowa Wild, Dumba has made an immediate impact, including setting a new team mark for plus-minus with a plus-4 rating on Dec. 8 against the Charlotte Checkers in Charlotte.

After a 4-1 in over the San Antonio Rampage on Thursday night at Wells Fargo Arena in Des Moines, Dumba said that he expected to have that kind of immediate impact on the team. 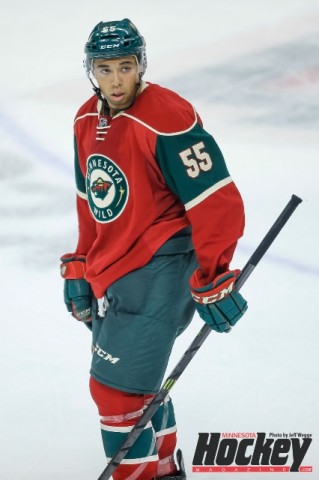 Matt Dumba says he wants to be a difference maker during his Iowa stint. (MHM Photo / Jeff Wegge)

“I believe in myself, I have confidence,” Dumba said. “That’s the type of player I am. I want to make a difference and down here, getting the ice time that I am, I’m trying to do the best I can without trying to force things or do a little too much, because sometimes I can do that. It’s just keeping simplicity in my game and just trying to be sharp and make hard plays.”

Confidence is something Iowa coach John Torchetti also says he sees in Dumba.

“He’s only going to get better,” Torchetti said. “He’s confident, he’s one of our leaders and he knows that; and he’s only been here two weeks.”

After the game against San Antonio, Torchetti called Dumba a “naturally-gifted player.”

Learning to play with new guys is not a task Dumba has had to deal with very much since he joined Iowa as he has known a lot of the current players for two years since he was drafted as they have all gone through the system in Minnesota together.

“A lot of them are good buddies,” Dumba said. “It’s kind of nice coming down here and having some chemistry with some of these guys.”