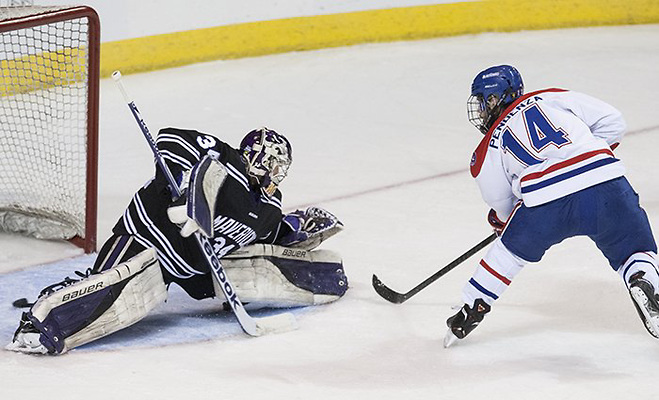 Massachusetts-Lowell’s Joe Pendenza puts the puck past Minnesota State goaltender Cole Huggins in the first period of the River Hawks’ 2-1 win over the Mavericks in the Northeast Region semifinal on Saturday, March 29 in Worcester, Mass. (Photo / Melissa Wade/USCHO)

On Saturday, the sophomore showed why.

Hellebuyck made a grade-A saves early and often against Minnesota State, stopping the first 35 shots he saw, backstopping the River Hawks to a 2-1 over the Mavericks, advancing Lowell to the Northeast Region Final against Boston College.

MSU goaltender Cole Huggins was just as good on the other end. After allowing a short-handed goal by Joe Pendenza at 12:54 into the first period, Huggins stopped every shot the rest of the way, finishing with 32 saves.

“Everybody was talking about the guy who won the game tonight,” MSU coach Mike Hastings said. “But if you go ahead and stack Cole’s numbers over the last 14 games, they’re comparable. I thought it was a great battle tonight.”

“It was a classic goalie battle,” Huggins said. “[Hellebuyck] made a lot of good saves. There were a couple of posts both ways and that could have gone either way. He played out of his head.”

Trailing by one with a minute remaining in regulation, the Mavericks pulled Huggins in an attempt to tie the game. But Lowell’s Zack Kamrass intercepted a shot from the point by Matt Leitner and flipped the puck 180 feet into the empty net, giving the River Hawks a 2-0 lead at 19:19.

The goal ended up being the game-winner. A roughing penalty 36 seconds later put the Mavericks on the power play and MSU gave itself a chance late. Johnny McInnis fired a shot high off the glass behind Hellebuyck and it ricocheted right to Zach Stepan at the right post, who flipped a back-hander in for his ninth of the season with 10.8 seconds remaining.

Minnesota State got the puck deep in the final seconds and even forced an icing and a faceoff to Hellebuyck’s left with 2.2 seconds left, but Lowell tied the puck up on the draw, spending the rest of the clock.

“We have no regrets coming out of here,” McInnis said. “We didn’t give up and that’s what I’m proud of. But it’s very frustrating, I can tell you that.”

The loss dropped MSU to 0-3 in the NCAA Tournament, but was a marked improvement over last year’s appearance, where the Mavericks were blasted by Miami of Ohio 4-0. It was their first loss since Jan. 31, snapping a 13-game unbeaten streak (12-0-1).

Hellebuyck, who entered on the heels of back-to-back shutouts last weekend in the Hockey East tournament, got off to a hot start, stopping a pair of big-time chances by Bryce Gervais in the opening minutes. He robbed Chase Grant twice early in the second and stopped all 16 shots he faced in the middle frame. Dylan Margonari and Teddy Blueger also put shots off the post.

He stopped 12 more shots in the third period and ran his shutout streak to nearly 200 minutes before Stepan beat him in the dying moments.

“We knew [Hellebuyck] was going to be good and he was good,” Hastings said.

Minnesota State finishes the season with a Division I record 26 wins and their first Final Five championship. They graduate four seniors, although only two — McInnis and Zach Lehrke — were in the lineup Saturday.

Barring any unexpected early departures, MSU will return 77 percent of its goal-scoring, including 40-point scorers Leitner and Jean-Paul Lafontaine. All six defensemen that played Saturday and both Huggins and Stephon Williams in goal are set to return as well.