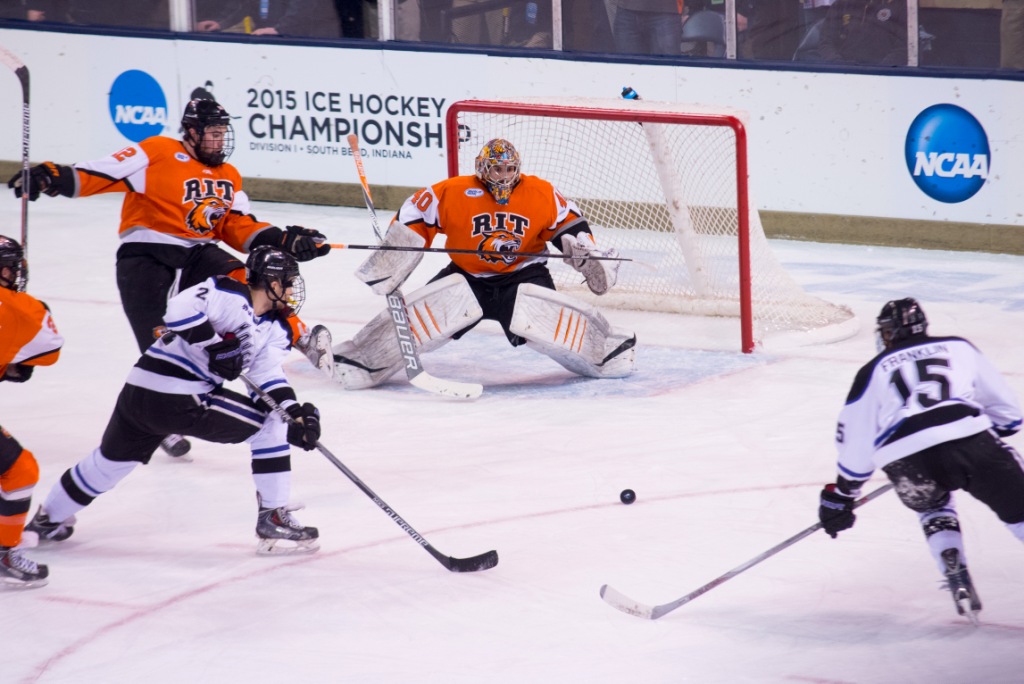 Rochester Institute of Technology pulled off the upset of the overall No. 1 seed Minnesota State behind a solid effort from senior goaltender Jordan Ruby and an overturned game-winning goal.

RIT beat MSU 2-1 in the NCAA Midwest Regional Semifinals Saturday at Compton Family Ice Arena in South Bend, Ind. It was a Division I-best eighth win in a row for RIT.

The game was tied 1-1 until late in the third period, a stretch where the Mavericks dominated and had multiple chances to take the lead. But with 5:51 on the clock and being outshot 13-2 in the third until that point, RIT broke the tie.

The game-winner didn’t come without controversy. Junior Josh Mitchell’s 16th goal of the season was quickly waved off on the ice but then overturned after an official review.

On the play, RIT’s Matt Garbowsky and MSU’s Zach Palmquist made contact with each other. As Garbowsky skated by the front of the net, Palmquist continued backward, falling into his own goaltender, Stephon Williams. As Palmquist and Williams were in a pile just to the side of the goal, Mitchell’s shot from the circle went into the goal. Senior Brad McGowan got the assist.

According to the NCAA official statement on the video replay, referees first made the no-goal call as a result of contact by the RIT forward and MSU defender, which they felt caused Williams to be interfered with on the play.

After video review, referees determined the Minnesota State player “initiated the contact with the RIT player” and overturned the call, according to the statement.

RIT had the 2-1 lead, plus a little momentum in the final minutes of the game.

The Mavericks pulled Williams with about two minutes remaining as they tried to get the equalizer. But they didn’t win a couple of key faceoffs in the RIT zone, including a final one with 13.3 seconds left, sealing their fate.

The Mavericks got off to a slow start in the first period, and the Tigers took advantage, jumping to a 1-0 lead just 4:30 into the game. RIT junior Alexander Kuqali worked to keep the puck in the offensive zone then drove to the net. He beat the goalie on the glove side with a backhand shot. Garbowsky and Mitchell had the assists.

Minnesota State’s game started to come around later in the first period, but it was held scoreless after 20 minutes, also going 0-for-3 on the power play during that stretch.

RIT came out with energy and seemed ready to play, while MSU struggled to get into the offensive zone and generate chances.

The game took on more of an even feel in the second period. Minnesota State shook off the early-game struggles and found its game.

The Mavericks finally cashed in on their fourth power play chance, tying the game at 1 halfway through the second period. It took just 13 seconds into the man advantage for MSU junior Teddy Blueger to fire a slapshot from the top of the circle into the back of the net for his 11th goal of the season. Jon Jutzi and Sean Flanagan got credit for the helpers.

That gave the Mavericks a surge of momentum. Not long after, they rang the puck off the crossbar.