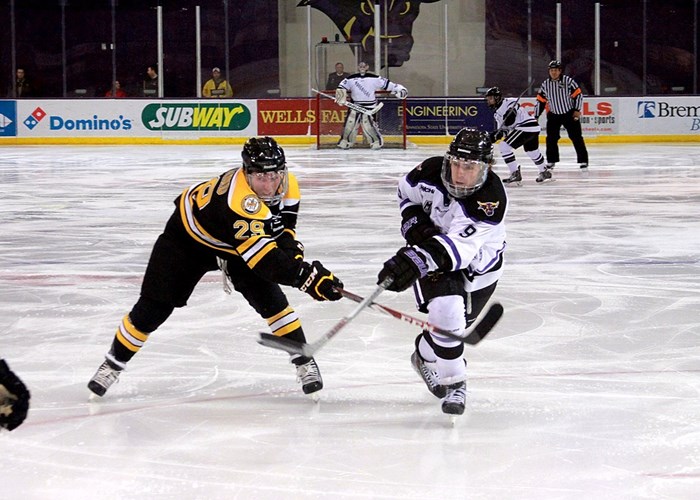 Minnesota State’s Bryce Gervais gets a shot off despite the effort of Michigan Tech defenseman Walker Hyland. Gervais notched his 21st goal of the season in the Mavericks’ 4-2 win over the Huskies Saturday night in Mankato, Minn. (Photo courtesy of Minnesota State University Athletics)

MANKATO, Minn. — With a 4-2 win against the Michigan Tech Huskies Saturday night at the Verizon Wireless Center, the Minnesota State Mavericks took control of the regular season championship race in the Western Collegiate Hockey Association.

With one week remaining, the Mavericks lead the Huskies by three points. MSU plays at Bemidji State next weekend while the Huskies play a home-and-home series against Northern Michigan.

One point for MSU next weekend clinches at least a share of the MacNaughton and the top overall seed for the conference playoffs.

Perhaps more importantly for the Mavericks, the victory snapped a three-game winless streak. A first-ever MacNaughton Cup is something coach Mike Hastings and his team have had their eyes on since falling a point shy of sharing the league title with Ferris State last season, but MSU, led by seven seniors, has bigger goals in mind.

Over their three-game winless streak (0-1-2) that spanned three weeks, the Mavericks scored three goals total, including one in a 1-1 tie to the Huskies on Friday night. MSU outshot Tech 44-23 and would have had a chance to clinch the regular season championship had they won the game.

The Mavericks fell behind early on Saturday, but tied the game 15 seconds later on a goal by junior Dylan Margonari and didn’t trail the rest of the game.

“We got more than one by [Tech goaltender Jamie Phillips],” Hastings said. “I thought last night, we hit a lot of shin pads and didn’t find lanes. I thought we had a little more traffic in front of him tonight.”

The Mavericks got goals from defensemen Jon Jutzi and Carter Foguth. Casey Nelson and Zach Palmquist had assists.

“They were better at the offensive blue line creating some offense for us,” Hastings said.

The Huskies got out of Mankato with a point largely because of Phillips, who was fantastic on Friday. He was good Saturday too but didn’t get much in the way of help in front of his own net. The four goals allowed was a season-high.

“I believe it,” Hastings said.

Elsewhere around the WCHA:

Bemidji State and Ferris State tied at 1-1. The Beavers took three out of four points in Big Rapids, keeping the Beavers four points ahead of the Bulldogs in the race for fourth place in the league and the final home-ice spot in the playoffs in two weeks.

BSU was helped by Lake Superior State, which scored a 3-0 win over Northern Michigan in Marquette. The Wildcats, which entered the game tied with Bemidji State for the final home ice spot, now trail the Beavers by a point heading into the final weekend.

Alabama-Huntsville was swept at home by Alaska, losing 4-3 in overtime on Saturday. Defenseman Colton Parayko scored 15 seconds into overtime for the game-winner. Alaska is 12-12-2 in WCHA play this season, which would put them in the home-ice mix. But NCAA and school sanctions have prohibited the Nanooks from participating in league playoffs this season. Huntsville, one year after finished 2-25-1 in league play, has seven wins this year and will likely make the WCHA playoffs.

Bowling Green won 4-3 in Anchorage on Friday and is locked into third place in the standings.