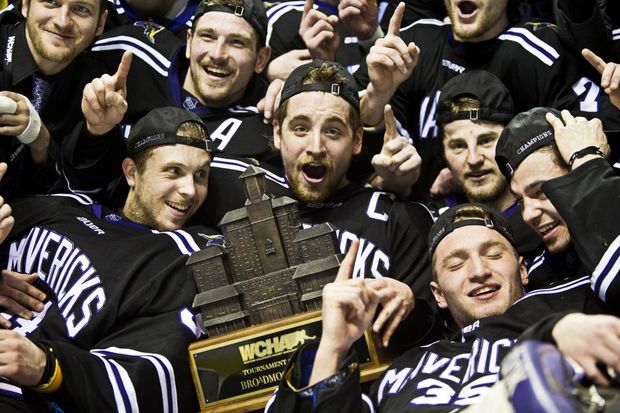 GRAND RAPIDS, Mich. — With an NCAA Tournament bid, a 12-game unbeaten streak and the first-ever conference championship on the line Saturday against Ferris State in the Broadmoor Trophy championship game, it was the Mavericks’ ‘Gold Rush’ line that hit the jackpot.

The Mavericks got a pair of goals from their fourth line and another from a defensive-defenseman as well as 25 saves from freshman goaltender Cole Huggins in a 4-1 win against Ferris State at Van Andel Arena.

The victory marked the first conference championship of any kind in MSU’s Division I era and the third win of the season for the Mavericks over the fourth-ranked Bulldogs. Minnesota State also wins the WCHA’s automatic bid into the NCAA Tournament which begins next weekend. It will be the third appearance for the Mavericks in their history and their second-straight.

“When I got here, it was pretty much a fantasy to lift this trophy someday, especially with the direction the program was at that time,” Mavericks captain Johnny McInnis said.

MSU’s fourth line of sophomore Brett Knowles, freshman Michael Huntebrinker and Max Gaede have their nickname because of the gold jerseys they wear in practice. With other forwards in the running for scoring titles, first-team all-league awards and player of the year races, down the stretch, its this group that has routinely strung together solid games.

“Those guys, they’re our energy line,” Mavericks defenseman Brett Stern said. “They’re always giving us energy and it’s good to see them get rewarded for it.”

“It’s crazy this game of hockey, it’s amazing when you put in the work you need to put in, more often that not, the hockey gods will pay you back,” MSU coach Mike Hastings said. “For them to be in the limelight a little bit, they’ve been doing the heavy-lifting for quite a while.”

Minnesota State owned the pace of play early and was rewarded when Huntebrinker capped an odd-man rush into the Ferris State zone with his second goal of the season at 9:13.

Four minutes later, the Mavericks scored in transition, as Teddy Blueger carried the puck from his defensive zone to MSU’s offensive blue line. He slowed down to open a passing lane to Stern, who blasted a shot through traffic and past goaltender C.J. Motte at 13:50. The goal was the first of the season for Stern, who now has three goals in 97 career games.

“It’s a play we’ve worked on,” Stern said. “Great play by Teddy to pull up and… I gave him a little holler and he found me. The puck had eyes.”

The Bulldogs played a more inspired game in the second period but did not capitalize until the 19:14 mark of the period when Gerald Mayhew scored his third goal of the weekend, chipping away at a rebound in front of Huggins before finishing from his stomach at the right post.

“We had to keep it even-keeled,” Stern said. “I thought the guys went back in the locker room and put their game-face back on went out as a 0-0 game, looking to put on the pressure and not just stay back. I think we did that.”

But the Mavericks re-established the two-goal lead at 8:38 of the third when Blueger wheeled around the net and fired a shot that Motte stopped. But the odd angle forced a rebound out to a crashing Knowles, who tapped the puck into an open net for his first of the season.

“I see guys like Huntebrinker, and [Knowles]… work as hard as they do,” McInnis said. “To see Knowles score and me being the first guy over to him, to see the look on his face… he told me he could have started crying. That just goes to show the emotion that we play with and how much it means to him.”

Blueger added an empty-netter with four seconds left to cap a three-point day and four-point weekend for the sophomore from Riga, Latvia.

Huggins stopped 61 of 62 shots on the weekend and was named the Final Five’s Most Valuable Player.

The Mavericks will learn their fate Sunday morning at 11 a.m. when the NCAA Tournament bracket is unveiled. Based on finishing 10th in the final Pairwise Rankings, which mimic the tournament committee’s criteria for selecting the teams, MSU will likely head to Worcester, Mass. for a first-round match-up against Massachusetts-Lowell, who won the Hockey East Tournament championship Saturday with a 4-0 win over New Hampshire.