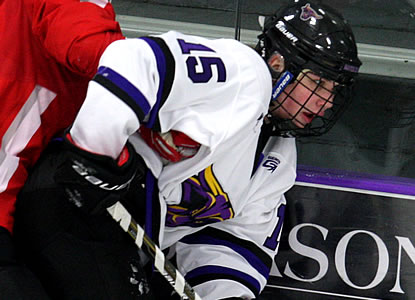 MSU forward tabbed as Offensive Player of the Week …

Minnesota State University’s Tracy McCann, a senior from Lakewood, Ohio, has been named the WCHA Women’s Offensive Player of the Week for Jan. 8, 2014.

A left winger, McCann’s pair of third-period goals against Lindenwood on Jan. 1 bookended a three-goal period in a 3-1 victory and series sweep. She was named the first star of the game. She backed that up by opening the scoring with a brilliant re-direction in the first period of Minnesota State’s 2-1 victory over Bemidji State on Jan. 4.

McCann’s three goals and 19 shots led all Mavericks last week, while her three points tied for the team-lead and +2 rating was third-best on the squad. She has generated 12 points (7g, 5a) while playing in all 22 games this season and continues to pace the squad with a +6 plus/minus rating while tying for 15th in the conference in goal scoring.