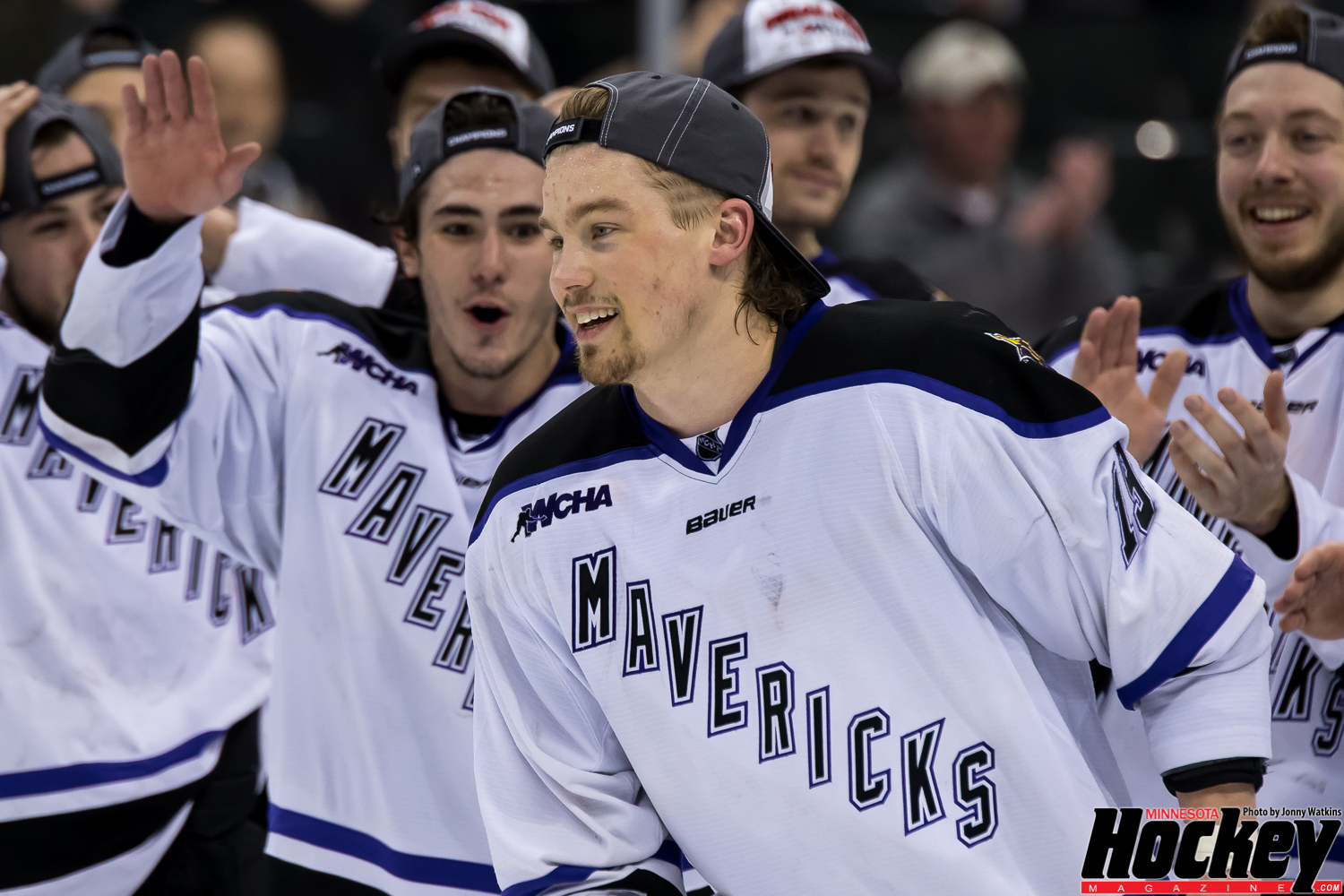 Bestowed on him by former teammates and coaches on his junior team in Penticton, McClure always seemed to score big goals in big games.

With one of the deepest teams in the country, the Mavericks haven’t needed ‘Captain Clutch’ yet this season. But Saturday at the Xcel Energy Center, he made a triumphant return.

McClure netted a natural hat trick in the third period, helping MSU to a 5-2 win over No. 4 Michigan Tech in the championship game of the WCHA Final Five.

The freshman from Stratford, Ont., finished the two-game tournament with five goals and an assist and was named the Final Five’s Most Valuable Player.

“He has a history of scoring big goals and of scoring a lot of them,” Mavericks coach Mike Hastings said. “Brad was very deserving of the MVP; he was very good both nights and I’m glad he’s wearing our jersey.”

The Mavericks needed McClure Saturday too. Down 2-1 after 40 minutes, MSU looked tired and worn out. Minnesota State hadn’t led all night, its power play was sluggish, and its normally rock-solid penalty kill had yielded a pair of goals.

Heading to the third needing one against the stingy Jamie Phillips — just to tie — seemed daunting enough, much less two to win.

But ‘Captain Clutch’ came through.

Jordan Nelson’s goal at 8:08 of the third tied the score, setting up McClure’s heroics over the final half of the period.

His first goal was a heavy snap shot from the right circle that snuck under the cross bar at 11:29.

Almost three minutes later, McClure danced out of the way of a Teddy Blueger shot from the point, redirecting the puck through his legs and past Phillips.

His final goal, a power-play tally like his second, was another deflection with 1:20 remaining.

“There were quite a few bounces that went my way,” McClure said. “It’s always nice to have those. There are some nights where you don’t. Tonight, it was on my stick at the right time and I found the back of the net a couple times.”

McClure’s 15 goals rank second on the team and his 29 points rank fourth.

“He does a good job. He was prepared when he got here,” Hastings said. “He got an opportunity [last summer] to go to Pittsburgh’s Developmental Camp and I think it put him in the right frame of mind.

The hat trick was the first in a Final Five game since 2009 when Minnesota Duluth’s MacGregor Sharp scored three goals against Denver, also in the championship game.

“He can shoot it from the bench as far as I’m concerned,” Hastings said. “He has a release. He likes to do it. He’s good at it.”

McClure has been consistent all season, never going more than three games without a point. But after scoring just one goal in his previous nine games, McClure now has six in his past three — just in time for the start of the NCAA Tournament next weekend.

The win delivered a second consecutive playoff title to the Mavericks, who also hoisted the MacNaughton Cup as regular season champions two weeks ago. MSU is the first team since 2011 to win both trophies in the same season.

“It’s really hard to put into words. Obviously, at the start of the season, it was a goal,” Mavericks captain Chase Grant said. “I think everybody starts out with that goal, but we knew it was realistic. We knew it was going to be hard to do and it’s hard doing it with the target on your back after winning it last year.”