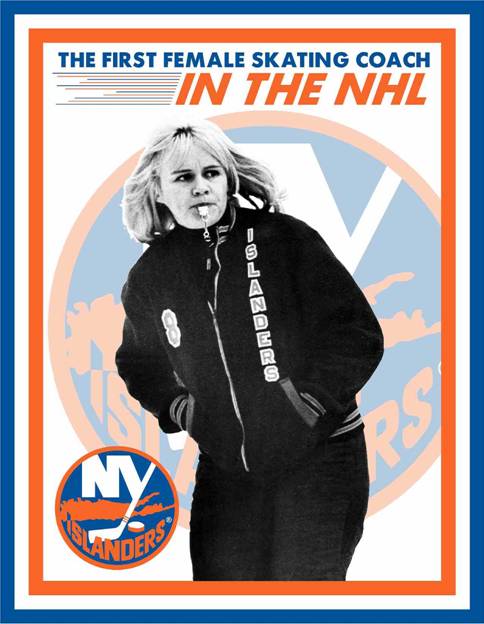 As she arrived at the New York Islanders practice rink, Barbara Williams didn’t know what the commotion was all about as the parking lot was filled with all types of media, from hundreds of reporters to television camera crews.  The mob of reporters and cameras followed her as she put her skates on and headed onto the ice and in minutes she would make hockey history. In her humility, Barbara didn’t realize until after the announcement that she was the story.

While waiting for the players to come out, legendary Islanders coach Al Arbour stepped onto the ice, skated over to Barbara and said in a loud voice,“The New York Islanders have just named the first female skating coach in the National Hockey League”. He then said even louder, “Let me introduce you to her: Miss Barbara Williams”. With the announcement, she was officially the Islanders’ Power-Skating Coach.

The Jan. 7, 1977 event is historical in that Williams became the first female to officially be recognized by an NHL organization as a coach. The Islanders progressive thoughts would lead to great success for the organization as many of Barbara’s students would go on to have their name engraved on the Stanley Cup. Beginning in 1980, the Islanders would go on to capture the Stanley Cup not once, but in four consecutive seasons.

Williams says her most profound hockey memory came in 198o, the first year of her tenure on Long Island.

“The memory I have of Bobby Nystrom scoring the game winning goal in the Stanley Cup Finals will stay with me forever, and just to know that I had trained him made me feel so proud,” Williams said.

After working with the Islanders, the next NHL team to name her their official skating coach was the New Jersey Devils. Her ties to New Jersey remain today as her student Keith Kinkade is a goalie in the organization. Most recently, her student Sonny Milano was chosen by the Columbus Blue Jackets in the first round, No. 16 overall, of the 2014 NHL draft.

With over 35 years of experience, Barbara has recently added to her book collection by producing Positive Power, a sequel to her first book, the best-selling More Power to Your Skating published by MacMillan Publishers. Barbara has not only trained players that were already in the NHL, she has introduced countless coaches to the methods she has developed through her camps. Using Barbara’s figure skating and speed skating techniques, these disciples taught many hockey players proper skating form, making her influence on the game historic.

“Barbara Williams is highly skilled as a power skating coach,” Arbour noted in her book. “She was extremely dependable and always displayed a high degree of integrity, responsibility and ambition. She had the respect and admiration from all of the New York Islanders, and that is why I named her the first female Skating Coach in the National Hockey League.

“Her years with the Islanders were positive, especially winning the Stanley Cup in 1980”.

Positive Power is much more than a power skating book, as it deals with the complete hockey player, from diet to discipline. The tips and charts are easy to understand and many of the drills are done with how to photo’s in a dry land setting.

Over the course of the next few months, Minnesota Hockey Magazine.com is proud to partner with Barbara Williams. We will provide some nuggets from her Positive Power book and will provide our audience a featured article to help you with your skating.

You can also visit her website, bwilliamspowerskating.com, and purchase the how-to book that is filled with charts, pictures and hints from the first female to coach in the NHL.  To order her book, just follow link below to save over 60% on the digital version.

Buy it now on Amazon.com