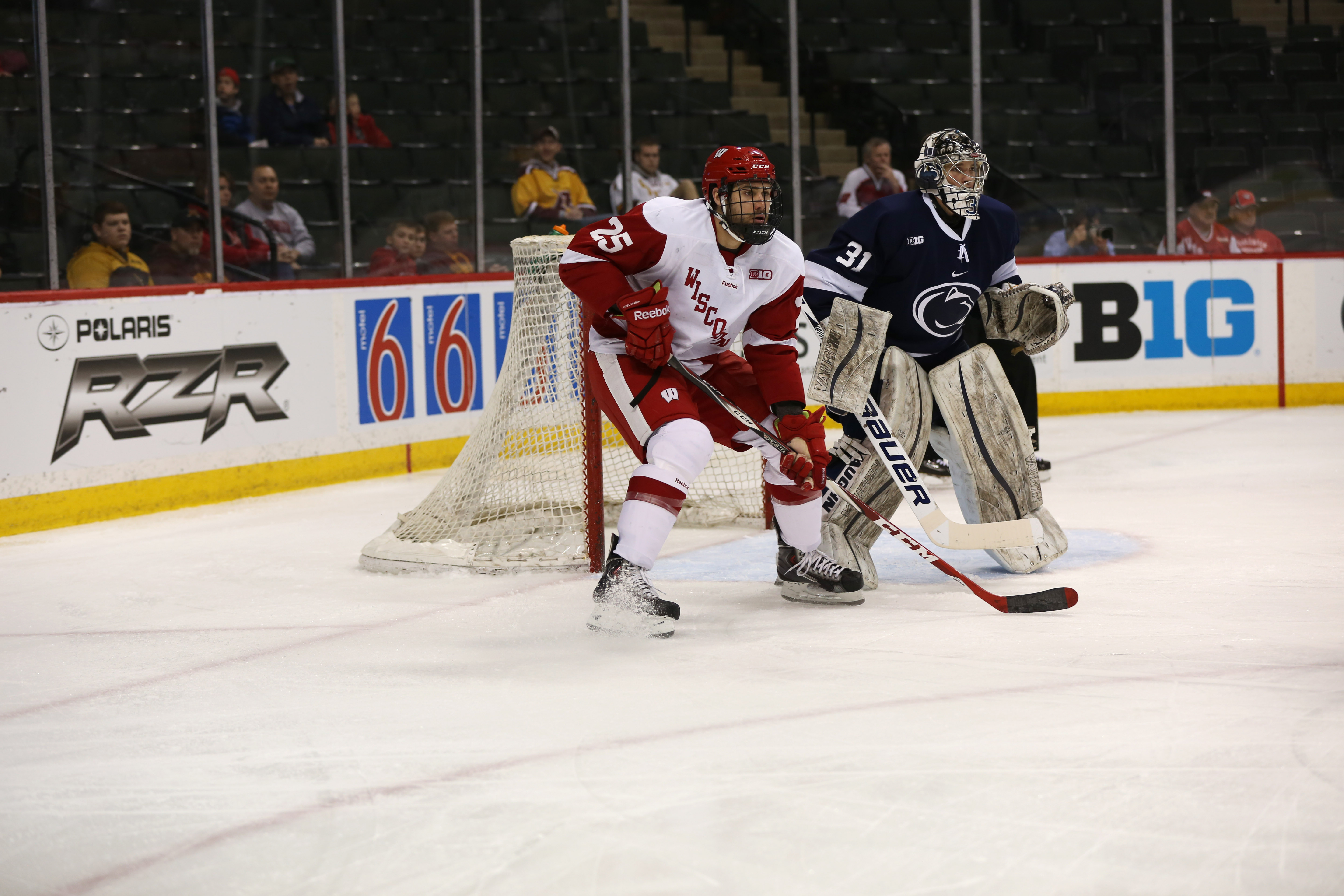 SAINT PAUL—When the Penn State Nittany Lions faced off against the University of Wisconsin Badgers Friday afternoon, it was tough to predict how this game would go. Just nine seconds into the game, PSU goaltender Matthew Skoff had to smother a puck after a big save off a Badgers two on one rush. That first play was an indication of how things might go.

The Badgers dominated the first period of play, creating a handful of quality scoring opportunities. The Penn State defense surrendered more than a few turnovers in their own zone that gave UW scoring opportunities in close. But Skoff was brilliant in goal, turning away all ten shots he faced, which included some back-to-back rebounds. Though the Nittany Lions held the Badgers off the board in the first period, they couldn’t find the back of the net either until early in the second period.

Just 55 seconds into the second period, PSU’s Curtis Loik buried the games first goal on a highlight reel play. Coming into the offensive zone on a two on one rush, Loik redirected a perfect pass into the net that teammate Kenny Brooks chipped over a sliding Badger defenseman to get to him.

The Nittany Lions lead was short lived though, as just 32 seconds later the Badgers tied the game at 1-1 when Jefferson Dahl found Michael Mersch crashing down the slot. Mersch made a slick move to his forehand around Skoff to finish the play.

“Our mindset on the bench was to respond to get the momentum back,” Wisconsin coach Mike Eaves said.

Both teams traded chances in the second period, with Wisconsin controlling the majority of play. Though the Nittany Lions looked poised to head into the locker room again tied, the Badgers were able to take the lead.

After a late bench minor penalty for too many men on the ice sent UW on the power play, it was Mersch again who capitalized on a great pass from Mark Zengerle. Mersch’s second goal of the game gave the Badgers a 2-1 lead with just 10.5 seconds remaining in the second period.

“Everyone contributed,” Mersch said. “I’m glad I could contribute with the goals, but everyone played a role.”

The third period saw Penn State make a big push as they spent most of the period in the Badgers defensive zone. The Nittany Lions had plenty of opportunities to tie this game, but seemed just inches way every time. The period would go scoreless, giving the Badgers the win and advancing them into tomorrow night’s Big Ten championship game.

As for PSU, their season has come to an end. They showed promise for a program in only its second season. They will definitely be a program on everyone’s college hockey radar in the future.

“We want to win the first one,” said Badger goaltender Joel Rumple who finished with 24 saves. “We are treating the game as if you lose you’re done.”

Rumple and the Badgers will play the winner of tonight’s matchup between Minnesota and Ohio State. The puck drops at 7 p.m. tomorrow night to crown the inaugural Big Ten hockey champion.