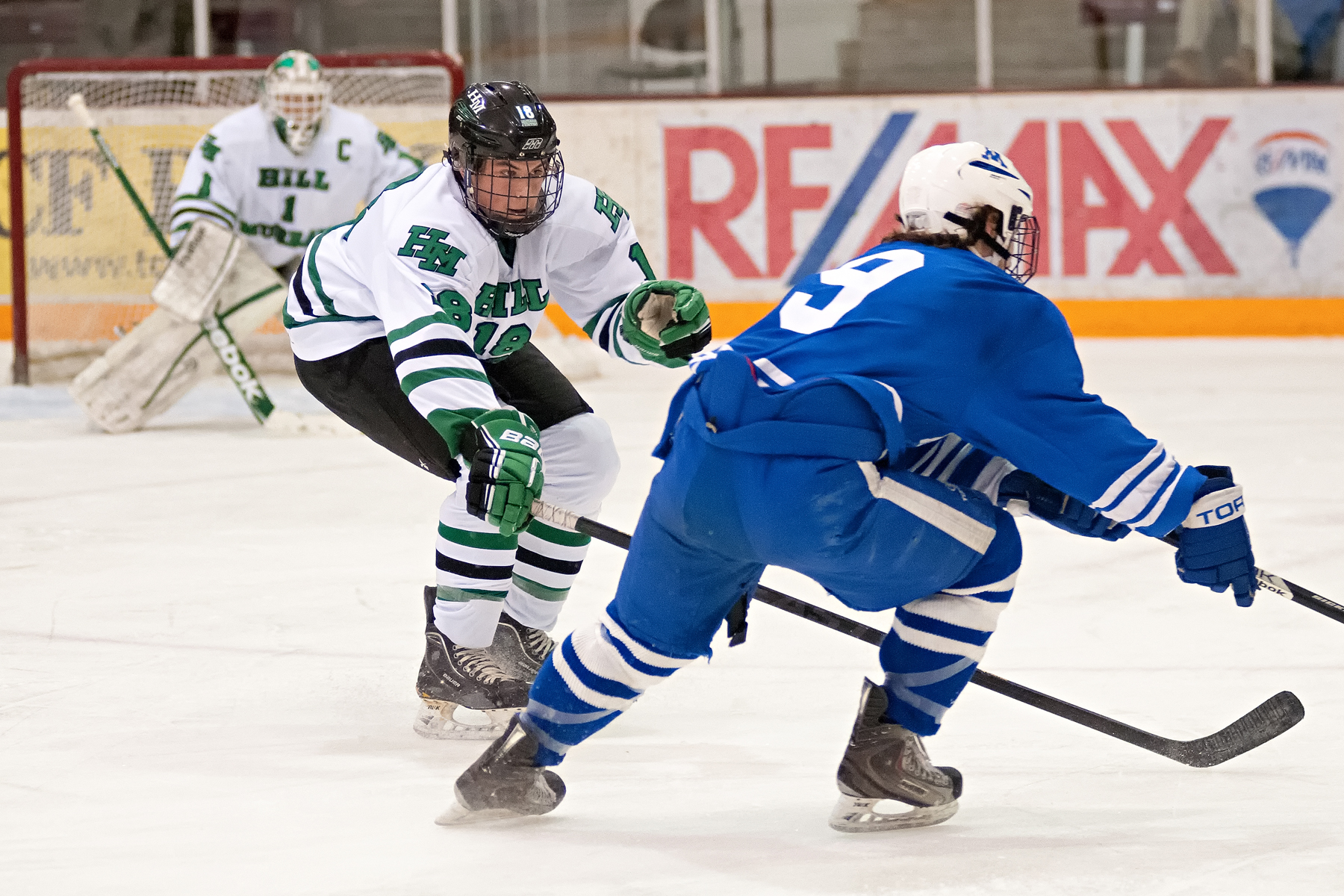 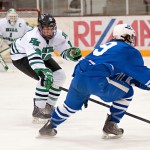 The top ten this year will be anything less than stable if the past two weeks are any indication.  The #2 Benilde-St. Margaret’s Red Knights, Edina Hornets, and Wayzata Trojans all lost games this week.  For Wayzata, it was their third loss of the young season that knocked them out of the top ten.  This week, the Bengals of Blaine hold serve as the top team while Hill-Murray is stalking the top spot.

1.  Blaine Bengals (4-0, 2-0)  The Bengals are living up to the early hype of being the top team in the state to date.  Note, the MinnesotaHockeyMag is not a bandwagon jumper and were the first to anoint the Bengals as the top team in the State.  They picked up conference wins over Osseo 6-2 and neighboring Centennial 3-1 to jump to a share of the top spot with Maple Grove in week two. The conference race will prove to be a difficult Northwest Suburban Conference this year.  The Bengals take on Anoka Thursday and a show-down with the #1 Class A team East Grand Forks this week.

2.  Hill-Murray Pioneers (3-0, 0-0)  Three impressive non-conference wins for the Pioneers show they are elite and poised for a terrific run this year.  They turned aside Lakeville South 6-0 and last week’s #2 Benilde-St. Margaret’s Red Knights 7-3 in a statement game.  Another quality opponent awaits the Pioneers in the #3 St. Thomas Academy Cadets as they face-off this Thursday to open the final year of the Classic Suburban Conference.  The Mahtomedi Zephyrs round out the schedule as they play on Saturday.

3.  St. Thomas Academy Cadets (2-0-1, 1-0-0) The Cadets played just one of their two games as their show-down with Holy Family Catholic was postponed due to weather this past Wednesday.  A big win over Lakeville North by a score of 5-2 propelled them to the #3 spot this week.  A tie with the Academy of Holy Angels kept them unbeaten in the early portion of the season.  Minnetonka, #2 Hill-Murray, and Tartan all await the Cadets who will have three different games on their menu.

4.  Elk River (2-0, 1-0) The Elks have long been known for their low scoring defensive tussles.  They opened their season with one that featured a 3-1 win over the Edina Hornets.  The 46 shots on goal for the Elks were noticed and they outscored the explosive Andover Huskies 7-6 in their Northwest Suburban Conference opener.  A big week faces the Elks as they have #7 Duluth East in non-conference play on Tuesday.  The Elks travel to Maple Grove on Thursday in a game can be heard on Sports Radio 105 The Ticket at 7pm, and battle rival Osseo on Saturday.  They have plenty of quality games in the next two weeks as they head to the Edina Holiday Classic in a week.  Looking ahead would be ill-advised as the Elks have three tough opponents this week.

5.  Benilde-St. Margaret’s (4-1) The Red Knights stormed out to a 4-0 record in which they outscored their opponents 29-11 in those contests.  This past week they opened with a bizarre 11-5 win over the Mounds View Mustangs who can put the puck in the net.  Then, it was a solid 5-4 win over the Burnsville Blaze in a well-played game in Burnsville.  They closed out their week with a 7-3 loss to the Hill-Murray Pioneers.  Games this week include Holy Family Catholic and Hibbing/Chisholm.

6.  Eden Prairie (3-0, 0-0) It was a pair of wins last week over former Lake Conference foes Rosemount (5-4) and Lakeville South (6-2) that moved the Eagles up 3 slots from 9 to 6.  It was the fashion that they finished the Lakeville South Cougars this past Saturday.  They out-shot the Cougars 49-26 and came in waves.  Something will have to give this week as they face the undefeated #10 Bloomington Jefferson Jaguars on Tuesday and play host to the 2-0-1 Cretin-Derham Hall Raiders on Friday.  Both games will take us a long way in seeing what direction the Eagles will fly this year.

7.  Duluth East Greyhounds (2-0) The Greyhounds stay put at #7 for another week and largely because they haven’t played since November 30th.  They have a showdown with the #4 Elk River Elks in a big Section 7AA game Tuesday.  They have the always entertaining contest with Cloquet-Esko Carlton on Thursday.

9.  Edina (4-2-0, 0-0) The Hornets were stopped a week ago by a steady Elk River team and rebounded with a quality win over the Prior Lake Lakers by a score of 4-2 in a key Section 2AA match-up.  That was followed up with a loss at Eagan by a score of 2-1.  Despite out-shooting Eagan 40-26 for the game, the Hornets did not get the result they were looking for.  The Hornets are off this week and come back with three games in a row at the Edina Holiday Classic next week that features #4 Elk River, #6 Eden Prairie, and #8 Grand Rapids.  All games can be viewed on NorthStarSports.tv.

10. Bloomington Jefferson (4-0, 0-0) The Jaguars had an impressive week with wins over Chanhassen (4-2) and Minnetonka (3-0).  They have been stingy defensively allowing just 4 goals against in four games.  They will hope to keep the puck out of the net this week in games with #6 Eden Prairie and Lakeville North.