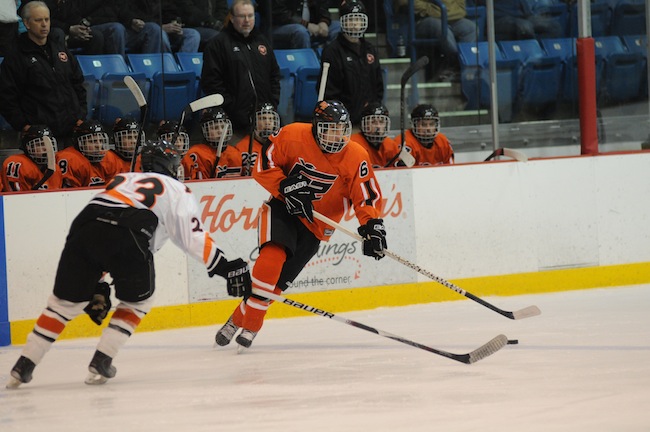 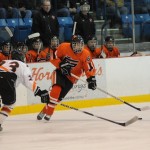 Featured Image:
Grand Rapids’ Avery Peterson is off to a fast start and his team cracks the top ten this week. Image by: Tim Kolehmainen

In week two and three, it can be said that ranking the top teams is about perception vs. reality.  That came to fruition this week as there were some surprising wins and some even more surprising losses among the top teams.  A look at week two shows plenty of shuffling of the teams.  This ranking system is based on performance, not a hunch.  If a team loses, it loses and most likely is supplanted by a team that continues to win.  Head-to-head match-ups play into the rankings as well.  One thing that is certain, this year will provide plenty of twists and turns as there are plenty of teams that are capable of beating each other throughout the season.

1.  Blaine Bengals (2-0-0, 0-0) The Bengals opened the season with a roadie that featured an eruption of 14 goals in two games.  Wins over Roseau (8-4) and Moorhead (6-4) illustrate how explosive this Bengal team is.  Somewhat concerning is the average of 4 goals against.  Anyone in hockey knows offense wins games and defense wins championships.  Look for that to be shored up in the Bengal camp over the coming weeks.  Seniors Tyler Cline (6g-1a-7pts) and Joey Lau (3g-4a-7pts) lead the way in the goals scoring category after two games.  Up next, the Bengals jump into the Northwest Suburban Conference schedule with games this week against Osseo and cross-town rival Centennial.

2.  Benilde-St. Margaret’s Red Knights (2-0-0)  Off to a torrid start, the Benilde-St. Margaret’s Red Knights have turned aside two opponents with ease.  Enough ease, that they catapulted four slots from six last week to the second position this week.  With 13 goals in two games, a shutout to their credit and, a sound 7-2 win over a solid Duluth Denfeld team this week, the Red Knights have a swagger out of the box that forced the MHM to take notice.  Goaltending has been sound as junior Jalen Long as turned aside 43 of 45 shots and posted a shutout in their 6-0 opening season win over the Rochester Lourdes Eagles. As would be expected, senior Spencer Naas (3g-3a-6pts) leads the way offensively. Juniors Chase Jungels (2g-3a-5pts) and Ben Newhouse (0g-5a-5pts) are providing a sound supporting cast for Naas and the Red Knights.  They will be featured in plenty of media this week as their Tuesday game will be streaming live on their BSMHockey.com website.  Thursday’s game with the Burnsville Blaze will also be available live on Sports Radio FM 105 The Ticket.   The Red Knights close out the week with the #3 Hill-Murray Pioneers at Aldrich Arena and that game will be streaming live from the MHM website as well.

3.  Hill-Murray Pioneers (1-0-0, 0-0-0) Led by a 3 goal rally in the third period, the Hill-Murray Pioneers turned aside last week’s #10 Burnsville Blaze to earn a quality win to open the season.  With Lakeville South and Benilde-St. Margaret’s on the schedule this week, the Pioneers will have a chance to move up.  For this week, they did elevate one slot from four to three.  Senior Zach Mills delivered two clutch goals in the third period with the game winner coming at 9:26.  Three different players produced multi-point games and senior goalie Sam Ilgen was solid when called upon.  Knowing where to be and how to execute on the ice is critical to a team’s success.  Year after year, head coach Bill Lechner’s teams have the same elements that thrust them to the top of the high school hockey food chain. They always play within in the team, skate, and never are overwhelmed from game-to-game or the situation.  More of that can be seen with two big games this week.

4.  Elk River Elks (1-0-0, 0-0-0) The Elks jump three slots from seven to four with a stiffing 3-1 win over the Edina Hornets in Elk River.  Known as a team loaded with defensemen and a terrific goalie, the Elks went offensive and outshot Edina 46-32 including 20-4 in the third period to finish with authority.  It was a game played five-on-five with each team only employing two  power plays for the game.  Junior Ben Johnson had two goals for the Elks, both in the second period,  including the game winner at 15:05.  The two teams will face each other in a re-match at Braemar Arena at the Holiday Classic later this month.  The Elks are off all week until they open their Northwest Suburban Conference action with the fast starting Andover Huskies.

5.  Edina Hornets (3-1-0, 0-0-0) Opening season wins over Holy Family Catholic (8-0), Wayzata (3-1), and Centennial (6-1) had the Hornets soaring until they landed in Elk River and were stopped by the Elks 3-1.  Senior Cullen Munson (7g-3a-10pts) is off to a sizzling start for the Hornets.  Five players are over a point a game and they have the depth to wear teams down much like they did against the Centennial Cougars, evidenced by their three goal second and third periods.  The goaltending has been equally impressive with Andrew Rohkohl (3-0, 0.67, 971) leading the way.  They have a big Section 2AA test in the Prior Lake Lakers on Tuesday who came off a sound 7-2 win over Chanhassen this past week.  The Hornets round out the week with a game at Eagan.

6.  St. Thomas Academy Cadets (1-0-1, 0-0-0) The Cadets delivered a win and a tie this past week as they opened with a 5-2 win over The Marshall School Duluth and then tied The Academy of Holy Angels 4-4 this past Saturday.  While the Cadets fired 64 shots at the AHA net, they couldn’t pull out the win as they allowed three goals in the third period to lose the grip on what appeared to be a win.  They will tussle with Holy Family Catholic on Wednesday and Lakeville North Saturday of this week. As expected, senior defenseman Seamus Donohue (1g-4a-5pts) and junior forward Tommy Novak (0g-5a-5pts) are pacing the offensive production for the Cadets.

7.  Duluth East Greyhounds (2-0-0) One gets the feeling that the young Duluth East Greyhounds will be in a series of low scoring affairs this year.  A big win over the Wayzata Trojans  by a score of 3-2 pushed the Hounds in the top 10.  They have trio of returning players that will be a factor in their push to the Section 7AA.  Seniors Phil Beaulieu, Jack Kolar and Alex Trapp are providing the leadership.  They play host to Anoka this week and travel over the bridge to tussle with rival Superior this week.

8.  Wayzata Trojans (3-2-0, 0-0-0) The Trojans have high expectations this season and certainly one week does a season not make.  However, two losses are two losses.  This past week, they played three games opening with a 4-1 win over Champlin Park.  They followed that up with a solid 6-1 win over Hermantown and fell to Duluth East this past Saturday 3-2.  Their other loss is to the Edina Hornets.  Maxwell Zimmer (2g-5a-7pts) is leading the way offensively for the youthful Trojans. Games with Apple Valley and Burnsville are on the docket.  Another loss, and the Trojans could be on the outside looking in to the prestigious MHM rankings.

9.  Eden Prairie Eagles (1-0-0, 0-0-0)  The Eagles held serve and picked up a balanced 6-0 win over the Osseo Orioles last week.  They play two this week as They host Rosemount Tuesday and head to Lakeville South on Saturday.  Junior Riley Argetsinger (3g-1a-4pts) had a productive first game and will take the goal scoring and point production pressure off seniors Steven Spinner and Luc Snuggerud.

10.  Grand Rapids Thunderhawks (2-0-0, 0-0-0)  The Thunderhaws opened the season with a pair of wins including a key Section 7AA victory over Forest Lake by a score of 2-1.  They eked out a 4-3 win over the Bemidji Lumberjacks to start the season last week.  Senior Avery Peterson (2g-2a-4pts) had a three point effort against Bemidji to pace his club.  They open the Iron Range Conference schedule with a tilt agains Virginia-Mountain Iron/Buhl and travel further north to battle Roseau on Friday followed by Warroad on Saturday.