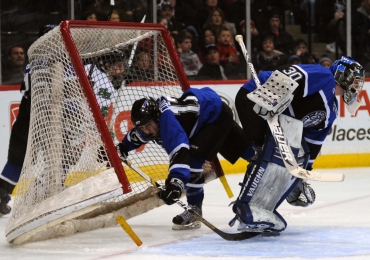 The top ten has not had a team hold the top spot for more than a couple of weeks this year and for good reason.  Everyone is beating each other in this wild season of high school hockey.  At this time, the Wayzata Trojans are playing the best hockey and are deserving of their #1 ranking this week.  The Lakeville North Panthers are the surprise team moving up the ladder to the second spot and for good reason.  They took down Hill-Murray in a solid 3-0 win.  The rest of the top ten is in tact and there were no newcomers to the MHM rankings this week although there was plenty of movement.

Pat O’Leary’s Trojans continue their impressive string of games as they are winners of 7 straight and are 8-1-0 in their last nine games.  The Trojans, along with the Lakeville North Panthers, are the two hottest teams in Class AA hockey.   While they didn’t blow anyone out last week, a 2-1 win over the Benilde-St. Margaret’s Red Knights and a 3-2 overtime win over Holy Family were recorded in the win column for a successful week.  Chandler Lindstrand’s goal at 4:41 of the second period stood up as the game winner against BSM.  The Trojans continue to take care of business in the Section 6AA with wins over BSM and Holy Family. Both of last week’s wins improved the Trojans section record to 2-0 and improves their bid to defend as Section 6AA champions.  While they are not particularly lighting up the score column averaging 3.36 goals per game, the Trojans have been filthy defensively allowing just 1.5 goals against.  They have been playing with a ferocity that is expected of them and it has anointed them as the #1 team in the MinnesotaHockeMag.com rankings for this week.

The Panthers haven’t lost since December 7th and that was to the St. Thomas Academy Cadets by a score of 5-2.  Since then, they are 7-0-1 in their last 8 games and have earned quality wins over Burnsville (5-2), Bloomington Jefferson (4-2) and (5-1), Eden Prairie (7-0), Hill-Murray (3-0), and tied Blaine (3-3).  Their losses were to Eastview (4-3) to open the season, Minnetonka (4-2), and the STA game.  The Panthers have turned the entire high school hockey world’s heads with their play and to see what they are doing live and turning of the scoreboard is impressive.  They are playing some of the best hockey this state has to offer at this moment.  Averaging nearly 4.5 goals per game, the Panthers are led by Jack Poehling (13g-13a-26pts) who is a well rounded player that wins draws, battles in all three zones, and is terrific off the rush and closes around the net.  They use a pair of goalies in Will Dupont (6-1-1, 2.25, .897) and Jake Oettinger (3-1-1, 1.94, 928). What is impressive for Oettinger is he is a freshman that has earned wins against Hill-Murray, Eden Praire, and Bloomginton Jefferson.  He also has a tie with the Blaine Bengals.  Right now, the Panthers have earned the second slot of the Minnesota HockeyMag.com rankings on the strength of some major wins against top ten teams and the wins have not been because of a fortunate bounce.  This team is beating teams defensively and offensively night in an night out.

The Bengals rebounded from the 4-0 loss to the Wayzata Trojans with a sturdy 5-3 win over an underrated Andover Husky team.  They overcame 2-0 first period and 3-2 second period deficits to erupt for three goals in the third period to pick up the hard fought win. The Bengals once again are at the top of the Northwest Suburban Conference with a 7-0 record and have the depth to score from multiple sources. Three players are tied for the team lead in points.  Joey Lau (8g-14a-22pts), Brandon Noterman (8g-14a-22pts), and Tyler Cline (15g-7a-22pts) lead they way not only in production but with senior leadership.  They will need to keep the puck out of their own net as they have allowed 7 of their 28 goals against in their last two games if they would like to earn a trip to the State Tournament for the first time in two seasons.

This Week:  at Bloomington Jefferson (1/7)

Like many teams that open the season searching for an identity, the Burnsville Blaze certainly are playing as though they have found it.  Like most teams that are surging to the top, the Blaze are 7-1 in their last 8 games with quality wins over Edina (4-2), Minnetonka (3-0), St. Thomas Academy (3-2), Eastview (6-1), and Wayzata (1-0).  Their losses have come to top ten teams in Hill-Murray (5-3), Lakeville North (5-2), and BSM (5-4). Brock Boeser (12g-14a-26pts) proves to be a game changer every night and the emergence of Jack Ahcan (4g-11a-15pts) on the blue line has helped the Blaze maintain the puck and play the attacking game that they execute so well.  Goaltender Dyllan Dubbesmeyer (9-4-0, 2.08, .916) has posted three shutouts this year and has ben a back-bone to his team.  After starting the season 1-3, he and his team is 8-1 in their last 9 games.

The Hornets held down the top spot for the second time this season last week and were tossed from that perch after losing to the Burnsville Blaze by a score of 4-2 last Thursday for this week’s rankings.  They were solid in their win against Cretin-Derham Hall and delivered 3 second period goals to earn the victory over White Bear Lake.  The Hornets are 7-1 in their last 8 games and have earned a split with  Burnsville thus far.   Two of their three losses have come to teams that were ranked in the top ten at the time of their meetings.  All three of Edina’s losses have come away from the friendly confines of Braemar Arena where they are stand a perfect 6-0.  Miguel Fidler (11g-14a-25pts), Cullen Munson (10g-11a-21pts), and Tyler Nanne (4g-15a-19pts) are a trio of seniors who have paced the way for the Hornets this season.  They are joined by fellow senior goaltender Andrew Rohkohl (11-3-0, 2.05, .923) who has paced the way for the Hornets.  As they continue through their difficult schedule, the tilt at Aldrich Arena with Hill-Murray will be great test for the Hornets away from Braemar.  The game with the Pioneers is the second time this year.

The Pioneers have lost two straight games, the first being handed down by the Edina Hornets and the most recent a 3-0 loss to the surging Lakeville North Panthers.  They will have a chance to right the ship or slip into a legitimate slide as the second half of the season makes the turn.  It won’t be easy as #1 Wayzata and #4 Edina on the schedule.  One thing is certain with the Pioneers, it is always about the long term success with big goal of the state tournament in St. Paul in its midst.  With  26 state tournament appearances and three state titles to their credit, it has been a solid formula.  Make no mistake, the Pioneers will look to get in the win column this week against two difficult opponents.  Mitch Slattery (7g-12a-19pts) leads his team in points and Josh French (10g-8a-18pts) paces the way in goals.  Zach Mills is second in goals with (9g-2a-11pts) and Joey Anderson (10g-8a-18pts) has been his consistent self and is third on the team in points.

After going on a 5-0-2 in seven games that followed a pair of 7-3 losses to Hill-Murray and Holy Family Catholic, the Red Knights have delivered their share of wins during that time.   A solid 5-2 win over Eden Prairie was an impressive win to go along with their two wins over Moorhead (9-1, and 4-2).  The big test came in the form of the top ranked Wayzata Trojans and while moral victories don’t bode well for top ten rankings, the Red Knights did win in the regard that they played well on the big sheet and will need to in the Section 6AA finals should they qualify for the finals at Mariucc Arena.  BSM also won in the fact that they held a top 5 team to 2 goals and delivered in a defensive game.  This week once again will test the mettle of the Red Knights as they take on a top team in STA and then crosstown rival Minnetonka as they take it outside at TCF Band Stadium in s critical Section 6AA game.  Spencer Naas (19g-16a-35pts) makes a case for being the best player on the ice every night and pushing him is defenseman Ben Newhouse (4g-19a-23pts).  Wing Carter Roo (14g-8a-24pts has hit his stride with the Red Knights and has been key in offensive production to the Red Knight surge.

It is a big week for the Thunderhawks who are coming off a pair of solid wins over Cloquet-Esko-Carlton (5-1) and Hopkins (6-1).  Avery Peterson (18g-18a-36pts) has been a man among boys on the ice and picked up (9g-9a-18pts) in his last 5 contests.  Hunter Shepard is (11-3-0, 2.68, .925) is key to their success and he presents problems for opposing teams in the net for Rapids.  After dropping a pair of games to Edina (4-3 ot), and Eden Prairie (7-4) at the Edina Holiday Classic, the Thunderhawks have won 6 straight with solid wins over Elk River (3-2), and Brainerd (3-1).  Currently, they are 4-0 against their section and a win over Duluth East would all but lock up the #1 seed.  Beating the Hounds will be easier said than done as they are always well coached and ready to play their sectional foes.  A solid Hermantown team comes first meaning the Thunderhawks do not want to get caught looking ahead to Thursday’s game as the Hawks are a very good hockey team.  The Thunderhawks will be closing out a 7 game home-stand this week.

The Cadets stay put at the #9 slot for this week with two wins over un-ranked opponents.  They endured a pair of tough one goal losses in the Schwan Cup Gold Division with a 3-2 loss to Burnsville and 5-4 overtime loss to the Breck Mustangs.  Since then, STA has responded with three straight wins by a combined score of 17-6.  Tom Novak is on a tear over his last five games as he has collected big numbers for his Cadets squad (3g-9a-12pts) and will consistently be looked to for leadership in getting it done for his team.  A big test is on deck for the Cadets at the St. Louis Park Rec Center Tuesday night.  That game can be seen live streaming on bsmhockey.com.

After starting the season 3-0 with wins over Lakeville North, East Ridge, and Hopkins, the Lightning hit a bump in the road falling to Burnsville (6-1) and Bloomington Jefferson (4-1).  They have earned 5 straight wins and have a big South Suburban and Section 3AA game against the Eagan Wildcats outside at TCF Bank Stadium this Saturday at 8pm.  Zach Driscoll (9-2-0, 1.98, .923) has been his dependable and as advertised self in the goal this year.  Offensive balance is the key to the Lightning this year and that bears itself out with 7 players who have picked up 9 points or more in 11 games this year.