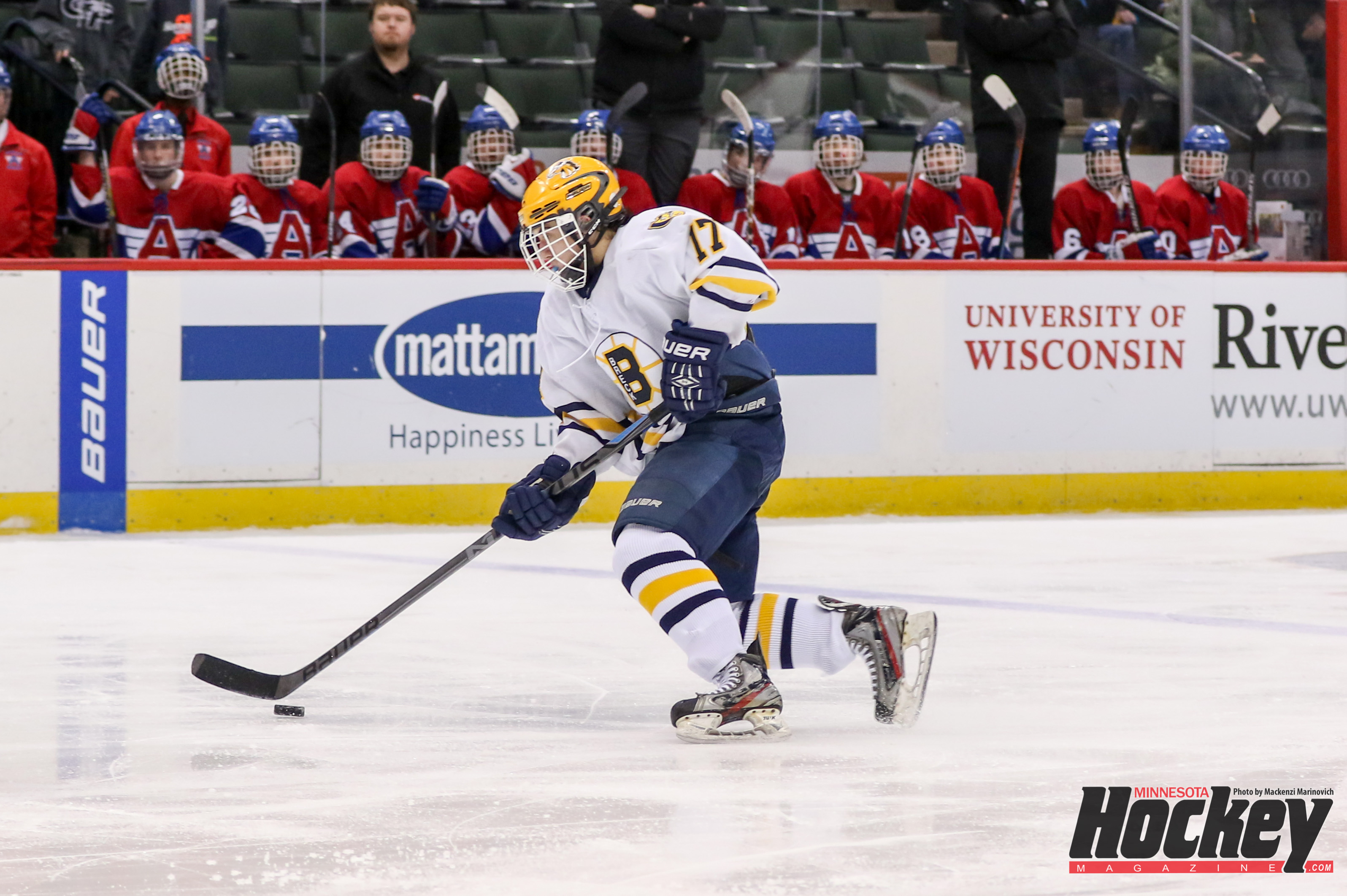 As the unofficial second half of the regular season got underway last week, most of the top teams in the Minnesota Hockey Magazine’s Class 1A top 10 rankings took care of business. There weren’t many moves, shy of the shuffling of No. 3 Breck and No. 4 St. Cloud Apollo following their head-to-head battle last Thursday.

Apollo entered as the higher-ranked team, but dropped behind the Mustangs after a tight 3-2 loss that signified how little separation there is between the two teams. It was the second straight overtime thriller for the two, as Apollo claimed a 1-0 win in last year’s Class 1A state tournament quarterfinals. This time, Breck got its revenge as Will Blake scored just under six minutes into overtime to end a two-game losing skid.

Elsewhere, Hibbing/Chisholm remained unbeaten but had to squeak out a pair of one-goal victories, while Greenway and East Grand Forks rolled to impressive weeks and moved up one spot each in the rankings.

The Hawks ran their winning streak to seven behind a pair of good victories over perennially strong programs, a 5-0 shutout at Grand Rapids and a 6-2 home win over St. Cloud Cathedral. The Thunderhawks actually outshot Hermantown 29-28, but veteran goaltender Luke Olson (8-1-0, 1.73, .932) stopped all 29 for the shutout. Standout sophomore Tyler Watkins (6-6-12) had two goals against Grand Rapids and a goal and two assists against Cathedral and appears to be breaking out. Hermantown has a Section 7A test against rising Greenway this week. It’s a chance to see if the Raiders can join in the top two in the section, or if Hermantown is again the favorite.

Hibbing/Chisholm remains unbeaten, but it wasn’t easy last week, as the Bluejackets squeezed out a pair of one-goal victories over Cloquet and Virginia. It took late heroics, as after leading scorer Scott Perunovich (9-29-38) scored with three minutes remaining against Cloquet, the Lumberjacks cut the lead to one in the final minute. The Bluejackets trailed in the third period against Virginia, but Zach DeBoom (9-7-16) tied it just 18 seconds after Virginia took the lead and Riley Versich (5-6-11) scored with 21 seconds left to win it. Hibbing has yet to allow more than three goals in a game this year and only have done that once, but the schedule ramps up in the coming weeks, beginning with Thursday’s home game against Grand Rapids.

The Mustangs responded from a difficult Schwan’s Cup Silver result (losing back-to-back games to finish fourth), by climbing over St. Cloud Apollo in the rankings, courtesy of a head-to-head overtime victory last week. Will Blake (10-15-25) scored 5:50 into overtime against Apollo and sophomore goaltender Linden Olness (12-3-0, 2.00, .896) stopped 30 of 32 shots. The victory also avenged an overtime loss to Apollo in last year’s Class 1A state quarterfinals. Breck also surged past Moorhead in its other game last week, scoring the final three goals to beat the Spuds, 6-3. Leading scorer Chase Ellingson (16-24-40) tallied two goals and Tyler Scott (10-18-28 added a goal and three assists. Breck’s schedule eases up with just one game this week at Holy Angels.

Apollo’s loss to Breck ended a string of six games in which the Eagles had five shutouts, yet at 1.29 goals against per game, Apollo still has the lowest goals against average of any team in the state. In an amazing span of 352 minutes, 22 seconds — from a goal by Mankato West’s Jimmy Miller on Dec. 19 to a goal by Breck’s Tyler Scott on Jan. 7 — Apollo senior goaltender Nick Althaus (12-2-0, 1.27, .938) allowed just one total goal. That’s a tribute to Althaus and the team defensive played by the Eagles, including top defensemen Tanner Breidenbach (9-15-24) and Brandon Baker (2-9-11), and terrific backchecking forwards, such as Brandon Bissett (13-14-27), who had both goals against Breck.

The Zephyrs split a pair of low-scoring Metro East Conference games against Class 2A opponents last week, edging St. Thomas Academy on a third-period goal by Andrew Kangas (8-15-23) and falling to Tartan, despite outshooting the Titans 35-26. That continues a streak of five games decided by two goals or less, the last four with neither team scoring more than three goals. On the season, Mahtomedi has had 10 of its 14 games decided by two goals or less, posting a 6-4-0 mark in those games. Leading scorer Luke Posner (12-12-24) is the only Zephyr with double-digit goals, although nine others have scored at least two goals.

Following up on its championship in the Heritage Holiday Classic in Duluth, St. Paul Academy allowed one total goal in two victories last week. Sophomore goaltender Andy Beran (11-3-0, 2.09, .912) had a scoreless streak of 176 minutes, 52 seconds broken in the third period against Mankato West, but the Spartans’ offense had already staked him to a 6-0 lead. Jack Johnston (15-11-26) netted a hat trick against West, while sophomore Dev McCabe (2-11-13) added his first two goals of the season. Johnston, just a junior, also scored against Minnehaha Academy and leads the Spartans in goals and points. SPA has won seven straight games since losing to Breck in mid-December.

A tough first period landed Delano in a big hole against Wright County Conference rival Holy Family Catholic last Tuesday, but the Tigers rallied to push the Fire to the end. Outshot 22-7 and outscored 3-0 in the first, Delano got goals from Peter Kruse (4-4-8), Luke Olson (4-0-4) and leading scorer Ben Meyers (23-14-37) over the final 30 minutes and outshot the Fire 20-18 in that span. But the early hole was too deep as the Tigers suffered their fifth loss of the year. Meyers, a junior forward, scored four more times in the week, netting a hat trick against Rochester Lourdes and a goal against Waconia, both victories for Delano. Two more strong Wright County Conference foes visit Delano this week, New Prague on Tuesday and Orono on Saturday.

The two-time defending Class 1A state champions inched up a spot in the rankings, thanks to back-to-back shutouts of Warroad and Lake of the Woods last week. Trevor Selk (5-12-17) tallied two goals in the victory at Warroad, while Tanner Tweten (10-11-21) led the offensive charge against Lake of the Woods with two goals. Goaltender Jarod Reak (10-4-1, 2.27, .877) earned both shutouts, although he only saw a total of 25 shots in the two games as the Green Wave’s defense tightened up. Reak, a senior, is on an active 148-minute, 13-second shutout streak, although continuing it will get tougher. The Green Wave step up a class this week, traveling to northwest Class 2A powers Roseau and Bemidji.

Next? Greenway passed a big Section 7A test last Tuesday by shutting out North Shore on the road, 6-0, behind a hat trick from Kole Kalisch (21-18-39). Both the Raiders and Storm had been surging and hoped to close the gap on Hermantown and Hibbing atop the section rankings. Greenway did just that, and now gets to visit Hermantown this Tuesday night in an even bigger test. The Raiders can certainly score, as they poured in 16 goals in two victories last week, but their defense was also impressive, allowing only eight shots on goal to North Shore and one total goal against goaltender Mike LaDoux (7-1-0, 1.25, .934). Kalisch capped off his big week with two more goals in a 10-1 rout of International Falls last Thursday and leads Greenway in goals.

The Prowlers dropped two spots in the rankings after falling to Moorhead last Thursday, but have still only lost to two Class 1A teams all year (No. 1 Hermantown and No. 3 Breck). That’s enough to keep the Prowlers in the top-10 and they certainly have argument for being ranked even higher. Leading scorer Ethan Johnson (22-9-31) poured in four goals in a 10-0 blitzing of Park Rapids Area and assisted on both goals — by Wyatt Ortloff (3-9-12) and Michael Johnson (7-19-26) — in the loss to Moorhead. A big traditional rivalry game looms on Thursday against Warroad.