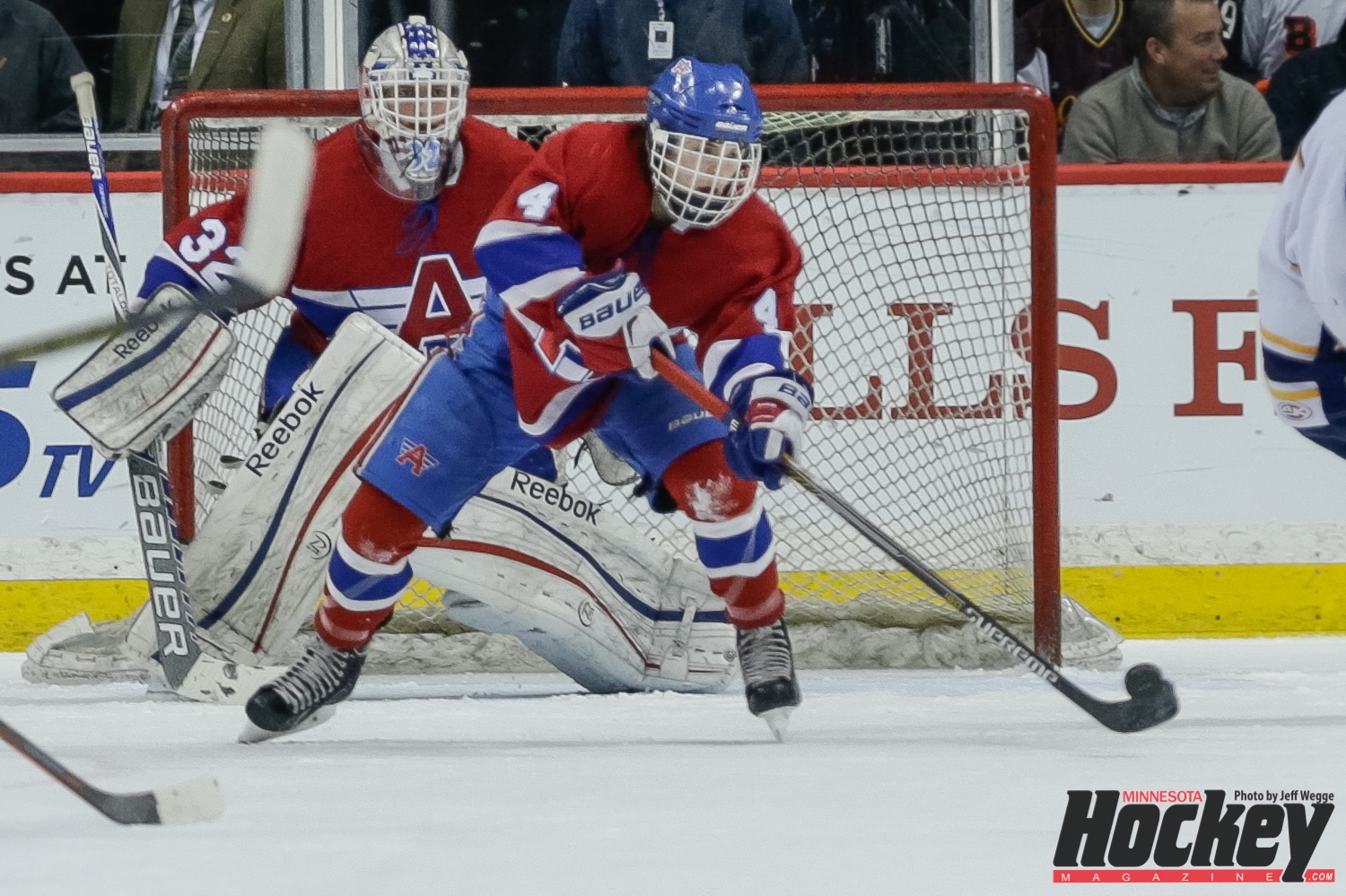 There wasn’t much of a shakeup atop the Minnesota Hockey Magazine’s Class 1A top 10 rankings, even though two of the top three programs fell to northern Class 2A powers. Hermantown retained its No. 1 ranking even after ending the week with a loss to Bemidji, while Hibbing/Chisholm did fall one spot to No. 3 after dropping its first game of the winter against Grand Rapids. Otherwise, most other programs held serve as the “dog days” of January arrive.

The Hawks had only scored fewer than three goals once in their first 14 games this winter until last week’s power outage. With just two goals in each game, Hermantown was fortunate to split a pair, edging Greenway by a goal and falling to Bemidji last Saturday. Two Hawks — Cole Koepke (19-17-36) and Ryan Sandelin (16-17-33) have double-digit goals this year and each scored against Bemidji. Dylan Samberg (3-10-13) broke a 1-all tie at Greenway with a goal midway through the second period, and the tough Hawks’ defense made that lead stand up, allowing only 18 total shots on goal to the Raiders. Still, the tight victory may signal that Section 7A is more than a two-team race, as Greenway has surged to No. 7 in this week’s poll.

Welcome back to the No. 2 spot in the rankings, Breck. The Mustangs have responded to a tough Schwan Cup Silver bracket over the holidays by winning three straight, including an 8-0 defeat of Holy Angels last Thursday. Mitch Machlitt (19-12-31) started the onslaught with a pair of first-period goals, both assisted by Austin Heidemann (5-15-20). Breck’s defense locked up the Stars the rest of the way, allowing just five shots on goal over the final two periods. Sophomore goaltender Linden Olness (13-3-0, 1.86, .900) had to make just 12 saves for his second shutout of the season. That’s the dominant Breck team that had held the No. 1 or No. 2 spot in the poll most of the winter and the one that will likely do so the rest of the way leading into the section tournaments in late February.

After suffering its first defeat of the season, Hibbing/Chisholm dropped back one spot in the rankings. The Bluejackets were shut out by visiting Grand Rapids last Thursday, also getting outshot 42-22. Freshman goaltender Ryan Ullan (14-1-0, 1.54, .931) continued his strong play with 39 saves on 42 shots, but the offense that hadn’t scored fewer than three goals in a game all year was finally stymied. The Bluejackets rolled up on Superior, WI in last week’s other game, as Logan Radovich (8-9-17) notched a hat trick and Jake Bestul (12-18-30) and Dylan Mattson (5-7-12) each had two goals. Knocked in some quarters for its strength of schedule thus far, Hibbing will see an uptick in the coming weeks with games against Thief River Falls, St. Cloud Apollo, Greenway and Hermantown — all ranked in this week’s top 10.

With its sixth shutout in the last eight games, St. Cloud Apollo continues to be the toughest defense to dent in the entire state. Through 15 games, the Eagles are allowing just 1.2 goals per game and have yet to allow more than three in any game. Noah Bissett (8-5-13) had two goals in the latest shutout over River Lakes, while senior goaltender Nick Althaus (13-2-0, 1.19, .943) stopped all 25 shots he faced. The tight defensive style and goaltending of Althaus is what led the Eagles to the Class 1A state semifinals last year and looks like it again will be the path to success for coach Pete Matanich’s team.

Mahtomedi responded to a 3-1 loss at Tartan 10 days ago with a resounding shutout of South St. Paul in its only game last week. Jake Anderson (5-10-15) popped in a hat trick, more than doubling his season goal total, while Tim Kuivinen (8-7-15) added two goals and an assist as the Zephyrs outshot South St. Paul 40-18. Mahtomedi has a similar formula as Apollo, as the Zephyrs are anchored by a veteran goaltender in Will Swanson (9-4-0, 1.84, .932) and are turning up the defensive pressure as the playoffs approach. The Zephyrs hit the road for five straight games over the rest of January, including a tough road tilt this Saturday at Hermantown.

Speaking of defensive pressure, Delano has tightened up since losing back-to-back games around the turn of the year. In its current four-game winning streak, Delano has allowed just four total goals while scoring 21 of its own. Last week, that resulted in two big victories over solid Wright County Conference opponents, New Prague and Orono. Brian Halonen (9-20-29) led a balanced attack against Orono with two goals and an assist, while leading scorer Ben Meyers (25-18-43) had the same two goal-one assist game against New Prague. Keep an eye on this Friday’s road game at Litchfield/Dassel-Cokato, which has surprised a few opponents already this winter with a dangerous offense.

Greenway was the furthest rising team this week, jumping all the way into the No. 7 position despite losing to top-ranked Hermantown. But the Raiders’ 2-1 loss was a signal that they belong among the top Class 1A teams in the state, as they went toe-to-toe with the Hawks for three periods. Joe LaDoux (6-11-17) scored the only goal against Hermantown, while Mike LaDoux (7-2-0, 1.33, .933) made 25 saves on 27 shots. They’re two of the three LaDoux triplets helping pace the Raiders — along with goaltender Sam LaDoux (6-1-0, 2.00, .918). Joe also scored in Greenway’s one-goal win over St. Cloud Tech on Friday night, while Sam made 25 saves on 27 shots. The Raiders return to the thick of Section 7A games this week with road games sandwiching a visit from North Shore on Thursday.

A high-scoring, one-goal home loss to Blake last Thursday derailed an impressive seven-game winning streak for St. Paul Academy. During their streak, the Spartans allowed just eight goals, but Blake dinged them for six last Thursday. The last time SPA gave up that many goals? The game before the streak started, a 6-0 loss to Breck on Dec. 12. Could there be another run in store for the Spartans? SPA rebounded with a big win over Rochester Lourdes on Saturday, as Riley Bowman (4-9-13), Jack Johnston (18-13-31), and Will Kelly (9-9-18) all scored twice. This week, the Spartans host Minneapolis in their only home game until mid-Feburary — with road games at Blake and Breck in that stretch.

The big question in East Grand Forks is when senior forward Grant Loven will return. Out all season with injuries, Loven may be back towards the end of this month, will be just in time to help the Green Wave’s playoff push. They’ve remained a top-10 team in his absence, however, thanks to the scoring of leading scorer Tanner Tweten (10-13-23) and seven other players who have between four and nine goals this winter. Casey Kallock (6-12-18) scored twice in a 4-1 win at Roseau last week, although Bemidji beat the Green Wave two days later. This week is big for the East siders, as they play two rivals from Grand Forks in the Gambucci Cup series, as well as traveling to Section 8A rival Thief River Falls.

With two games remaining against East Grand Forks, including a home game this Tuesday night, Thief River Falls held serve as the chief rival to the Green Wave’s recent dominance in Section 8A. The Prowlers dispatched Kittson Central in a shutout to start last week, as Lucas Magnusson (12-15-27) had two goals and Kade Nelson (12-4-0, 2.31, .895) made eight saves for the shutout. It was a little hairier against Warroad, however, as the Prowlers rallied from a 3-1 third period deficit to beat the Warriors in overtime. Magnusson netted the game-winner just 2:38 into the extra session, following late third-period goals by Michael Johnson (9-22-31) and Ethan Johnson (23-11-34).