Hawks solidify grip on top spot, Crusaders climb back in 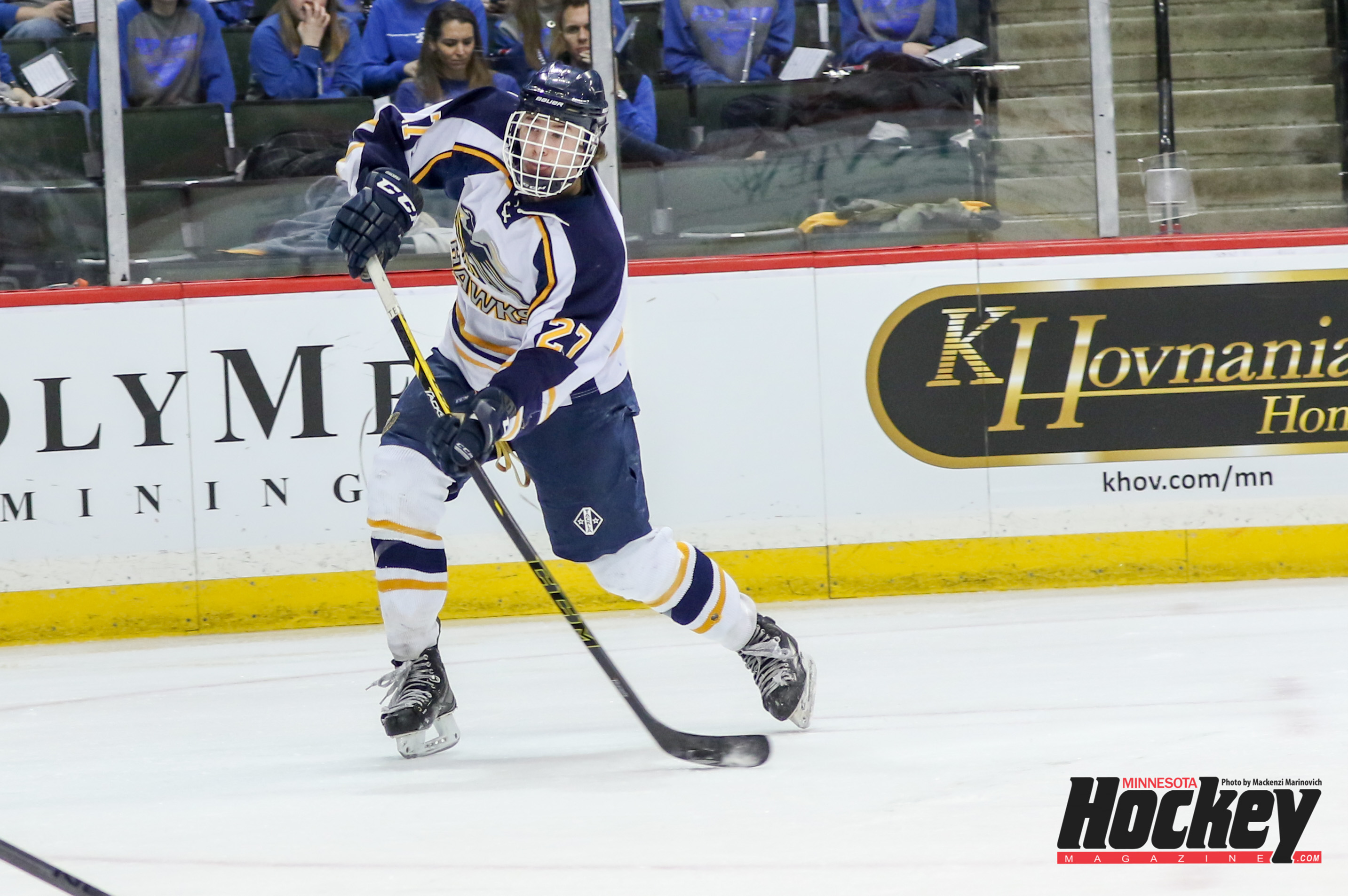 Cole Koepke and the No. 1 Hermantown Hawks are rolling as we inch closer to the start of section play. (MHM File Photo / Mackenzi Marinovich)

Hawks solidify grip on top spot, Crusaders climb back in

A current four-game losing streak knocked two-time defending Class 1A state champion East Grand Forks from the Minnesota Hockey Magazine’s top-10 poll for the first time this season this week, the only shake up from last week’s rankings. The Green Wave were replaced by St. Cloud Cathedral, which won a pair of important one-goal games last week, and currently hold the expected No. 2 seeding in tough Section 6A behind No. 4 St. Cloud Apollo.

Otherwise, the top teams held their positions as the only losses among the remainder of the top-10 were favorites beating lower-ranked opponents (No. 1 Hermantown over No. 5 Mahtomedi and No. 3 Hibbing/Chisholm defeating No. 9 Thief River Falls).

With just over two weeks remaining in the regular season, the jockeying for playoff position — and possible state tournament seeding — will continue.

The Hawks kicked their offense into high gear last week, throwing in 20 goals in three easy victories, including a surprising 6-2 defeat of No. 5 Mahtomedi, a game in which Hermantown outshot the Zephyrs 45-23. Cole Koepke (24-21-45) notched a hat trick, assisted three times by Ryan Sandelin (18-21-39) and twice by Jesse Jacques (10-22-32). That line has powered the Hawks all year and ranks 1-2-3 in individual scoring, in the above order. Their 52 goals account for 54 percent of the team’s scoring, and no other player has more than six goals. Thursday’s home game against Cloquet-Esko-Carlton is interesting from a regional rivalry aspect, although it doesn’t affect any potential playoff seeding.

Speaking of kicking offense into high gear, Breck rang up 21 goals in two victories last week, including a 16-1 thumping of Providence Academy last Thursday. Eleven different Mustangs scored at least one goal in the game, but none had more than the two each scored by Austin Heidemann (7-18-25), Justin Paschke (5-5-10), Mitch Machlitt (21-15-36), Will Blake (16-19-35), and Grant Parrish (8-1-9). When the Mustangs are at their best, that’s the scoring balance that makes them almost impossible to defend. Breck has an important pair of games this week, with IMAC rivals Blake and St. Paul Academy visiting Anderson Ice Arena. The Mustangs have yet to face Blake, but did beat SPA 6-0 back on Dec. 12.

Hibbing/Chisholm began the toughest stretch of its schedule by winning three times last week, allowing just three goals in the three home games against Section 7A rival Duluth Denfeld and perennial northwestern Minnesota powers Warroad and Thief River Falls. The Bluejackets’ Zach DeBoom (13-10-23) led the way with a goal in each game, including poking in the game-winner with 25 seconds left in Saturday’s one-goal win over Thief River Falls. The Bluejackets actually trailed 2-1 with just over a minute left, but crafty defenseman Scott Perunovich (10-38-48) tied it on the power play and DeBoom won it in the final minute. Hibbing/Chisholm continues with a pair of Section 7A teams this week before traveling to St. Cloud Apollo in a very intriguing match-up on Friday.

In its last 10 games, St. Cloud Apollo is 9-1-0 and has eight shutouts. Yes, eight shutouts. The Eagles are the toughest team in the state on which to score, as evidenced by their state-best 1.06 goals against average. Section 6A foes Sauk Rapids-Rice and Alexandria couldn’t dent the Eagles’ defense last week, running their current shutout streak to 153 minutes (since losing 3-2 in overtime to Breck on Jan. 7). Senior goaltender Nick Althaus (15-2-0, 1.05, .946) leads the state in shutouts with eight, and is first in both goals against and save percentage. Who will score next on Apollo? Little Falls is up first on Tuesday in an important Section 6A game, as the Flyers are hanging on the fringe of the top-10.

After rolling past Hastings in its first game last week, Mahtomedi ran into the Hermantown buzz saw Saturday in Hawks’ country. The Zephyrs actually scored first against Hermantown, as Jack Heinsch (9-9-18) tallied 2:22 into the game to give Mahtomedi a 1-0 lead. But Hermantown responded with three goals in the first, outshooting the Zephyrs 22-9 in that frame, and rolled from there. The schedule doesn’t get much easier this week for coach Jeff Poeschl’s team, as it hits the road for three games in five days against St. Cloud Cathedral, Stillwater, and Hill-Murray — all ranked in the top-15 in either Class 1A or Class 2A. Mahtomedi may end the season with the most losses of any top-10 team, but it will be battle tested for the playoffs.

The Tigers stretched their winning streak to six games with two Wright County Conference victories last week. Two more loom this week, including a rematch with WCC-leading Holy Family Catholic, which handed Delano its only conference loss back on Jan. 5, 4-3. That was also the last game the Tigers allowed more than two goals until last Thursday’s firewagon game at Litchfield/Dassel-Cokato. Leading 5-1 entering the third period on two goals from John Keranan (13-22-35), the Tigers held off a hard-charging Dragons’ team. Perhaps the four-goal lead was misleading, however, as Litchfield actually outshot Delano 29-12 through two periods.

Greenway enters a 10-day break on a four-game winning streak, although the Raiders needed overtime to escape Virginia/Mt. Iron-Buhl last Tuesday, 4-3. Kole Kalisch (24-21-45) scored 2:03 into overtime and Mike LaDoux (9-2-0, 1.54, .927) made 22 saves to lead the Raiders past the Blue Devils. Greenway also likely wrapped up at least the No. 3 seed in Section 7A with a second victory over North Shore. The Raiders’ three losses have come against section opponents, however, in Duluth Denfeld, Hibbing/Chisholm, and Hermantown — although they were by a combined four goals. After the 10-day layoff, Greenway returns to action with its final section regular season game at Hibbing/Chisholm.

With 11 wins in its last 12 games, St. Paul Academy is soaring as the season winds down. Last week, the Spartans rolled past three opponents by a combined 16-3 score, including a key Section 4A shutout of St. Paul Johnson on Saturday, 3-0. Jack Johnston (20-13-33), Dev McCabe (4-17-21), and Matt Dahlseide (19-17-36) scored in the first period and the Spartans cruised from there as sophomore goaltender Andy Beran () stopped all 23 Governors’ shots. In SPA’s four losses this winter, three have been by a single goal. The only other loss? A 6-0 shutout by Breck on Dec. 12. This Thursday, the Spartans travel to Breck for the rematch, hoping to improve on that result.

Thief River Falls too control of the Section 8A race last week, shutting out East Grand Forks, 5-0 on Tuesday night at home. Ethan Johnson (27-12-39) continued his season-long scoring outburst with a hat trick, while Lucas Magnusson (13-18-31) and defenseman Brendan Bushy (4-19-23) each had two assists. The Prowlers did drop a one-goal game at Hibbing/Chisholm to end the week, a disappointing result as they actually led by a goal with 1:10 remaining. There is also still a rematch at East Grand Forks on the schedule for Feb. 9, but first the Prowlers must get past Lake of the Woods and Crookston this week, although both games are at home.

The Crusaders finally reenter the rankings after falling out in mid-December after a three-game losing streak. But a closer look at their schedule reveals four losses to teams ranked ahead of them in the top-10 (No. 1 Hermantown, No. 2 Breck, No. 4 St. Cloud Apollo, and No. 6 Delano), and a loss to two-time defending state champion East Grand Forks. What kept the Crusaders out of the rankings was a true signature win, something they picked up twice this week with one-goal victories over rising Little Falls and Blake. Leading scorer Logan Neu (15-17-32) scored twice against the Flyers, rallying Cathedral from a late one-goal deficit, and netted the game-winner against Blake. Another “signature” game looms Tuesday night against No. 5 Mahtomedi.