A pair of teams swap positions in largely static rankings 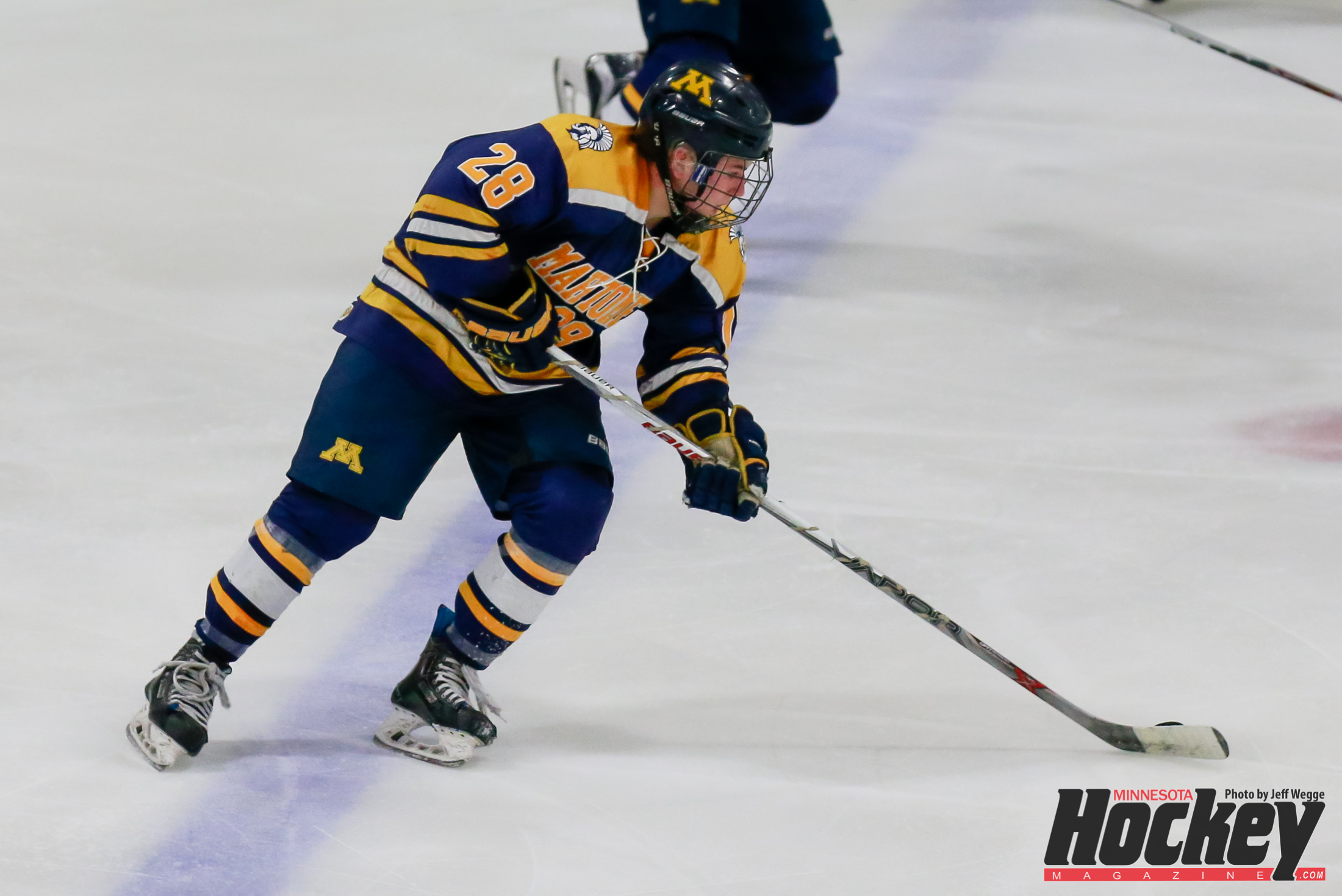 A loss to Class 2A power Stillwater wasn’t enough to drop Andrew Kangas and the Mahtomedi Zephyrs from the top half of this week’s CrankyApe.com boys’ Class 1A Top-10. (MHM Photo / Jeff Wegge)

A pair of teams swap positions in largely static rankings

With only two weeks left in the regular season, many of the teams in the Minnesota Hockey Magazine’s top-10 rankings have nearly sorted out their potential section seeding — as well as state ranking. Last week’s biggest game was a match-up between then No. 4 St. Cloud Apollo and No. 3 Hibbing/Chisholm at the Municipal Athletic Complex in St. Cloud. After Apollo edged the Bluejackets, 3-1, the two teams predictably traded places in the rankings. But that was the only shift among the top-10 teams, as stability ruled.

Keep an eye on a couple of teams outside the top-10 who could be dangerous, however.

East Grand Forks welcomed back Grant Loven after a season-long absence, and he responded with two first-period goals in a 4-2 victory over Warroad. So much for shaking off the rust.

Luverne also rolled past New Ulm for a second time this winter, seemingly taking control of the Section 3A race. Super sophomore Jaxon Nelson also hit 60 goals and 100 points on the season with two weeks to play. The University of Minnesota recruit is in range of several single-season and career state scoring records.

The Hawks have now won 13 of their last 14 games after beating a pair of northeastern Minnesota rivals by equal 4-1 scores last week. Leading scorer Cole Koepke (27-22-49) got Hermantown off to a good start in both games, scoring twice in the first period against Virginia/MIB and once in the first against Cloquet. The Hawks’ offense appears to be in postseason form, as they ripped a combined 95 shots on goal in the two games. Wyatt Aamodt (5-22-27) added four assists and Ryan Sandelin (19-23-42) had a goal and two assists on the week. As is coach Bruce Plante’s modus operandi, the Hawks face two solid Class 2A teams this week in road trips to Farmington and Brainerd. Looming the following week is a regular-season closing game against Hibbing/Chisholm, the Hawks’ top competition in Section 7A.

It wasn’t as easy the second time around, but Breck remained unbeaten in the IMAC with a 4-3 overtime thriller against St. Paul Academy last Thursday. Austin Heidemann (8-20-28) erased a one-goal third-period deficit to send the game to overtime and leading scorer Chase Ellingson (22-28-50) sent the Mustangs home happy just 1:35 into the extra session with his second goal of the game. In their first meeting back on Dec. 12, Breck shut out the Spartans, 6-0. Ellingson also scored twice in Tuesday’s shutout of Blake, as did Carter Breitenfeldt (11-13-24). As befitting the two close rivals, there were 38 minutes of penalties in the game. Look for another intense game when they meet again in the regular season finale on Feb. 13 at Blake.

The Eagles’ long shutout streak came to an end last week, as they allowed more goals in four games (nine) as they had in the previous 13 (eight). But Apollo cranked up its offense enough to win all four and climb a spot in the rankings, courtesy of Friday’s 3-1 defeat of Hibbing/Chisholm. After the Bluejackets took a 1-0 lead in the second period, Brandon Bissett (17-20-37) went to work with a natural hat trick, spanning 13:28 over the second and third periods. Gino Lucia (15-26-41) assisted on the first two Bissett goals to give the Eagles the victory, while Nick Althaus (19-2-0, 1.27, .938) stopped 32 of 33 shots. Bissett also scored in the third against Virginia to break a tie, as did Carter Rieland (7-8-15) against St. Cloud Tech and Noah Bissett (11-6-17) in overtime against Little Falls, as the Eagles won three one-goal games.

In a much-anticipated head-to-head showdown at St. Cloud Apollo last Friday, the Bluejackets fell shy in a 3-1 loss, knocking them down a spot in the top-10 rankings. Hibbing/Chisholm actually outshot the Eagles, 33-28, but couldn’t solve Apollo goaltender Nick Althaus. Big power forward Zach DeBoom (18-10-28) had a big week with five goals, scoring at least once in each game to take over the team goal-scoring lead from Jarrett Lee (16-17-33) and Jake Bestul (13-26-39). The Bluejackets have a big final two weeks exclusively in Section 7A play, hosting Greenway this Tuesday night and ending the season at Hermantown on Feb. 11. Those three teams look like the favorites in the section and these head-to-head meetings should sort out the seeding process.

Mahtomedi has gone just 5-4-1 in its last 10 games, yet hasn’t dropped below No. 5 in the rankings during that stretch. How is that possible? Playing in the tough Metro East with a host of Class 2A teams doesn’t hurt, nor does a difficult non-conference schedule that included Hermantown (a 6-2 loss), St. Cloud Cathedral (a 7-4 win behind a hat trick from Tommy Strelow (6-10-16)), and Stillwater (a 4-0 loss) over the past two weeks. The Zephyrs split three games last week, going 1-1-1, including a 1-1 tie at Hill-Murray last Saturday. In each game, the shot totals were fairly even. It doesn’t get much easier this week, as the Zephyrs host St. Thomas Academy Tuesday night and visit Totino-Grace on Saturday. Mahtomedi will be battle-hardened as the playoffs begin.

Delano lost to its Wright County Conference nemesis Holy Family Catholic for the second time this winter, ending a seven-game winning streak for the Tigers. During those seven games, the Tigers poured in 47 goals (6.7 per game), but could only muster one against the Fire, a late goal by John Keranen (14-22-36) assisted from Ben Meyers (27-23-50).  Along with Brian Halonen (12-22-34) and Jesse Lawman (13-18-31), they are the four Tigers with more than 10 goals and 30 points this season. Delano closes out its regular season with four straight conference games, beginning with rematches with Waconia and New Prague this week. In their first meetings, Delano won by a combined 9-3 score.

The Raiders received a welcome break last week, as heading into Tuesday night’s huge Section 7A game at Hibbing/Chisholm, they’ve had 10 days off. Greenway hopes to reverse its earlier game against the Bluejackets, as they lost 4-2 at home. Dylan Carlson (12-16-28) and Kole Kalisch (24-21-45) each scored in that game, as the Raiders had a 2-1 lead late in the second period. A Greenway win this week could throw the seeding meeting into confusion, with Hermantown joining the two as the likely top three seeds.

A rematch with Breck may have proved to St. Paul Academy — and other observers — that it has as good a chance as any other team in the top-10 to win the state title this winter. After losing to the Mustangs 6-0 back on Dec. 12, the Spartans took Breck to the brink before losing 4-3 in overtime last Thursday. Evan Dahlseide (5-14-19) and Matt Dahlseide (20-18-38) gave SPA a 2-0 lead just 40 seconds into the second period, but the Mustangs struck back to tie it. Justin Jallen (15-16-31) tallied early in the third to regain the lead, but the Spartans couldn’t hold it. Jallen and Jack Johnston (23-16-39) also recorded hat tricks as the Spartans shut out Providence Academy last week. SPA hasn’t scored fewer than three goals since the turn of the year, so its offense is peaking at the right time.

The Prowlers rebounded from a loss at Hibbing/Chisholm to roll past a pair of northwestern Minnesota teams last week, beating Lake of the Woods and Crookston by a combined 15-6 score. Leading scorer Ethan Johnson (32-15-47) racked up five goals and three assists combined and is now tied for sixth in the state in goal-scoring, while Michael Johnson (13-28-41) had a goal and five assists. With earlier victories over Warroad and East Grand Forks, the Prowlers are in control of the top seed in Section 8A. There is a rematch with East Grand Forks on the near horizon. The Green Wave are surging after getting Grant Loven back in the lineup for the first time all year.

Cathedral’s hold on the final spot in the top-10 rankings is tenuous at best, after the Crusaders split two games last week. That said, Cathedral’s six losses are all to Class 1A teams ranked above it, including last week’s 7-4 home loss to Mahtomedi. Trevor Cornelius (6-9-15) tried to keep pace with the Zephyrs, scoring a hat trick, while Jeron Hirschfeld (1-13-14) had two assists. Still looking for a true “signature win,” the Crusaders have five games in the final two weeks of the regular season, including a home game against Little Falls and road tilts at Duluth Marshall and Holy Family Catholic, both Class 2A teams.