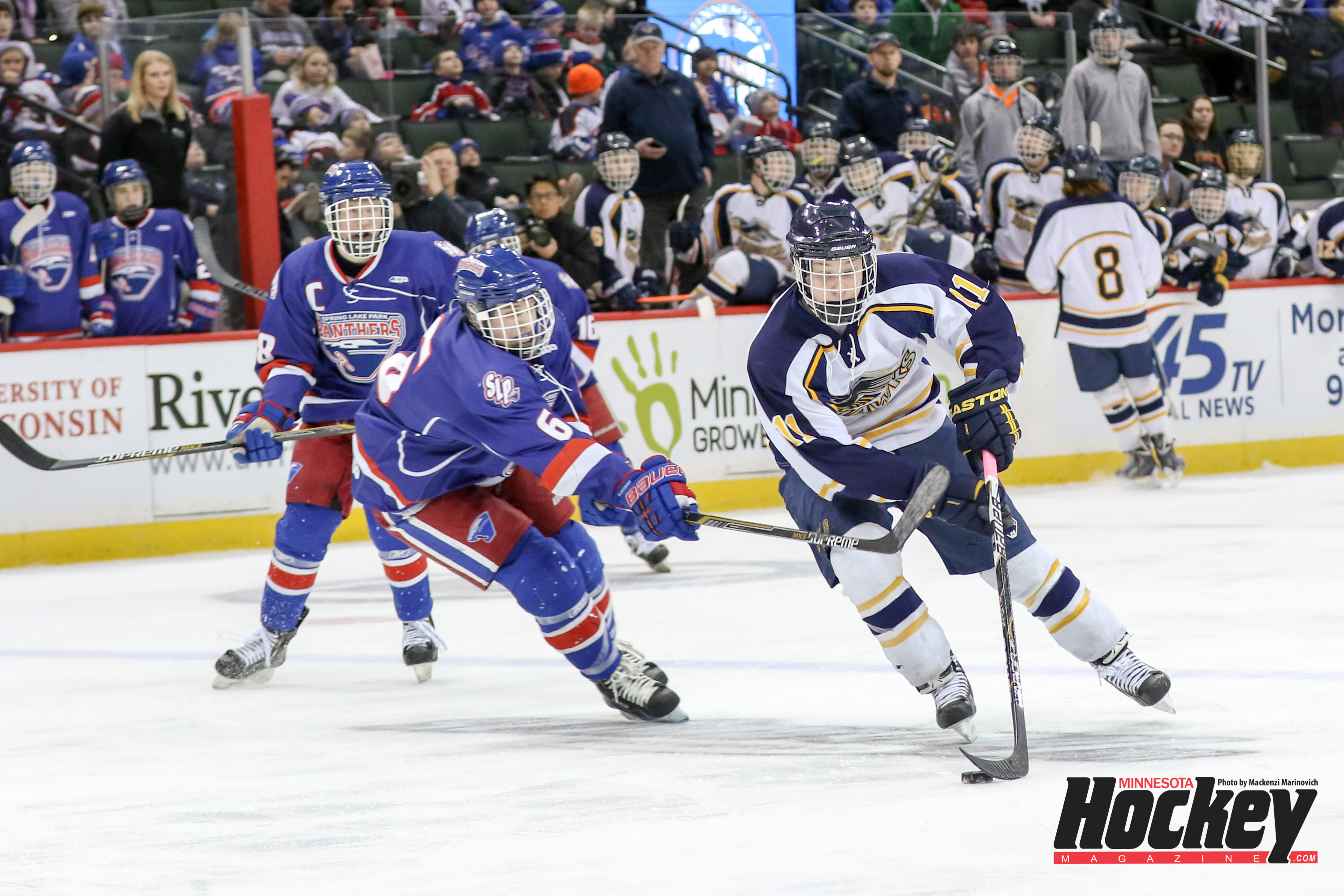 After five straight runner-up finishes, Ryan Sandelin and the Hermantown Hawks begin their quest this week to turn the corner and secure a state title. (MHM File Photo / Mackenzi Marinovich)

With a big finishing kick, seven different teams in Class 1A completed the regular season with at least 20 victories — and all are ranked in Minnesota Hockey Magazine’s final CrankyApe.com Class 1A regular season rankings of the season. The programs run across the state, from the far southwestern corner (Luverne) to the far northeast (Greenway and Hibbing/Chisholm) and almost everywhere in between. That balance of power is good for Class 1A hockey and should lead to an exciting state tournament in just over two weeks.

Three of those seven programs, however, will face off in the upcoming Section 7A playoffs, including No. 1 Hermantown, No. 5 Hibbing/Chisholm, and No. 7 Greenway. The other four 20-win programs all face tough tests in their respective sections, but are scattered equally (Breck in Section 2A, Luverne in Section 3A, St. Paul Academy in Section 4A, and St. Cloud Apollo in Section 6A).

Hermantown laid claim to the top seed in the upcoming Section 7A playoffs courtesy of a resounding 7-0 victory over Hibbing/Chisholm in the regular season finale last Thursday. Hibbing came in hoping to leapfrog the Hawks for the top seed in the section. Instead, behind two goals each from Cole Koepke (31-22-53) and Peter Grytdahl (4-3-7), the Hawks rolled. As the top seed, Hermantown will face the winner of the 8/9 play-in game (International Falls and Eveleth-Gilbert) on Thursday at home. The Hawks enter the playoffs on an eight-game winning streak in which they’ve allowed no more than two goals in a game, and are a perfect 11-0-0 against Class 1A teams. As six-time Class 1A state runners-up, it looks like the state title could again go through coach Bruce Plante’s Hawks.

As expected, Breck picked up the top seed in the upcoming Section 2A playoffs and a quarterfinal game at Parade Friday against the winner of the 8/9 play-in game (Bloomington Kennedy or Mound-Westonka). Last Tuesday’s 4-4 tie at No. 4 Mahtomedi was Breck’s only non-victory in its past dozen games (11-0-1).  But the Mustangs rebounded to roll past rival Blake in the regular season finale, 9-1, sweeping their season series. Senior Mr. Hockey candidate Chase Ellingson (34-31-65) tallied a hat trick both games last week, while 13 different players recorded at least one point in the win over Blake. With apologies to Hermantown, Breck may be the deepest team top to bottom in all of Class 1A, which could be the difference as it makes a state tournament run.  On the season, seven different Mustangs have at least 20 points, while another five have at least 12 points.

This week: Section 6A quarterfinals vs. River Lakes (2/16)

While Section 7A may have the toughest trio of teams at the top, St. Cloud Apollo and Section 6A may be the deepest from top to bottom of any section in the state. The Eagles capped a two-loss regular season with the No. 1 seed in the section and a home quarterfinal game against No. 8 River Lakes. But it won’t be an easy path back to state, as there are landmines galore. On the strength of a 10-game stretch at midseason in which Apollo had eight shutouts, the Eagles lead the state in goals against (1.48 per game). Both of Apollo’s losses were by a single goal (2-1 at Bemidji in the season opener and 3-2 against Breck in overtime on Jan. 7). Senior Nick Althaus (23-2-0, 1.47, .930) is one of two finalists for the Frank Brimsek Award as the top senior goaltender in the state and is a two-time veteran of state tournament action.

As the top seed in Section 4A, Mahtomedi earned a quarterfinal match-up with the winner of the 8/9 play-in game between Simley and St. Paul Como Park Friday night at Aldrich Arena. The Zephyrs played as tough a schedule as any team in Class 1A, as 16 of their 25 regular season games were against Class 2A teams. In the nine games against Class 1A programs, Mahtomedi went 7-1-1, including last week’s 4-4 home tie with No. 2 Breck. Jake Anderson (10-13-23) scored twice, including the tying goal in the third period for Mahtomedi. Those goals brought Anderson into double-digit territory, one of six Zephyrs to do so this winter, led by Tim Kuivinen (20-9-29) and Andrew Kangas (10-33-43). Mahtomedi finished 5-0-0 against Section 4A teams, including a 3-2 victory over No. 2 seed St. Paul Academy back on Dec. 1.

Hibbing’s shot at the top seed in Section 7A went by the wayside as Hermantown waylaid the Bluejackets, 7-0, in the regular season finale last Thursday. It was the first time Hibbing’s tough defense had allowed more than three goals all season, as they are one of only three Class 1A teams to let in fewer than 1.80 goals per game (1.76). As the No. 2 seed behind Hermantown in the playoffs, Hibbing/Chisholm will face the winner of the 7/10 play-in game (Proctor and Ely) on Thursday at home. Junior defenseman Scott Perunovich (13-55-68) led the Bluejackets in scoring and is widely considered one of the most dangerous two-way defensemen in the state. But he’s certainly not a one-man team, as Hibbing has eight other players who recorded double-digit points, including leading goal-scorer Zach DeBoom (22-10-32).

With a sweep of defending Section 8A champion East Grand Forks this winter, Thief River Falls earned the top seed in the section playoffs and a Thursday night home game against the winner of the 8/9 play-in game between Lake of the Woods and Red Lake Falls. The Prowlers actually trailed 2-0 midway through the third period of last Tuesday’s 4-2 victory at East Grand Forks, but scored four goals in a span of eight minutes, six seconds to earn the victory. Actually, to be correct, senior sniper Ethan Johnson (40-17-57) scored four goals in that stretch, extending his team-leading goal total. Johnson has been a one-man wrecking crew much of the season, since opening with hat trick against Roseau in a Nov. 24 game televised on FSN. He’s been held without a goal in only four games all winter and only one game without a point.

This week: Section 7A quarterfinals vs. North Shore (2/18)

In what may be bulletin board material at Greenway, the Raiders were bypassed for the No. 3 seed in Section 7A by a .500 Duluth Denfeld squad. What that means is that the Raiders still get a home game Thursday against fifth-seeded North Shore, a team they beat twice, but they’ll end up having to face Hermantown in the semifinals instead of a possible championship game. Of course, one could point to the Raiders’ 4-3 overtime loss in a head-to-head meeting with Denfeld back on Dec. 1 as the reason for the slight. Since that game, the Raiders are 18-3-0, losing only to Hermantown once and Hibbing/Chisholm twice — the top two teams in Section 7A. It will be interesting to see the goaltending split in the playoffs between two of the Raiders’ LaDoux triplets: Mike LaDoux (10-3-0, 1.91, .920) and Sam LaDoux (9-1-0, 1.80, .918), both of whom have been outstanding this year.

A busy four-win week capped a 20-win regular season for St. Paul Academy, and earned the Spartans the No. 2 seed in the Section 4A playoffs. SPA begins its state tournament push Friday night at Aldrich Arena against the winner of the 7/10 play-in game between Henry Sibley and St. Paul Highland Park. A young SPA team seems to be coming of age in time for the playoffs, as they’ve won nine of their last 10 games, only falling in overtime to No. 2 Breck on Jan. 28. Only one of the Spartans’ top seven scorers is a senior — Justin Jallen (19-23-42) — and goaltender Andy Beran (20-5-0, 1.99, .916) is just a sophomore.

Despite falling to Section 2A rival Orono last week, Delano held onto the No. 2 seed in the section tournament — Orono is No. 3 — which begins with a game Friday against the winner of the 7/10 play-in game (Minneapolis or Providence Academy) at Parade. While the loss to the Spartans didn’t affect the Tigers playoff positioning, it did knock them several spots down the top-10. Junior Ben Meyers (32-30-62) is hovering at the edge of the top-10 in both goals and points state-wide. He anchors the Tigers’ offense along with John Keranen (15-30-45), Brian Halonen (14-24-38), and Jesse Lawman (16-20-36). A possible section semifinal match-up with Orono won’t be easy as last week’s result indicated, nor a potential final against Breck, the only two teams to beat Delano in section play this year.

Welcome back to the top-10 rankings, Luverne. With a pair of victories to close out the regular season, the Cardinals broke the 20-win plateau and also regained the No. 10 spot in the poll that it lost in early December. Luverne also earned the No. 1 seed in the Section 3A playoffs and will host a quarterfinal game Thursday night against the winner of the 8/9 play-in game (Windom Area or Fairmont). While much of the focus of Luverne’s season has been on the scoring exploits of sophomore Jaxon Nelson (70-43-113) and senior Chaz Smedsrud (38-56-94), the Cardinals have plenty of scoring depth. Nelson leads a great sophomore class that also includes Kasyn Kruse (26-33-59), Nick Harder (22-21-43) and Declan Beers (18-24-42). A deep playoff run could net Nelson the state’s all-time single-season records for goals (currently 73 by Little Falls’ Ben Hanowski) and points (currently 135 by Hanowski).