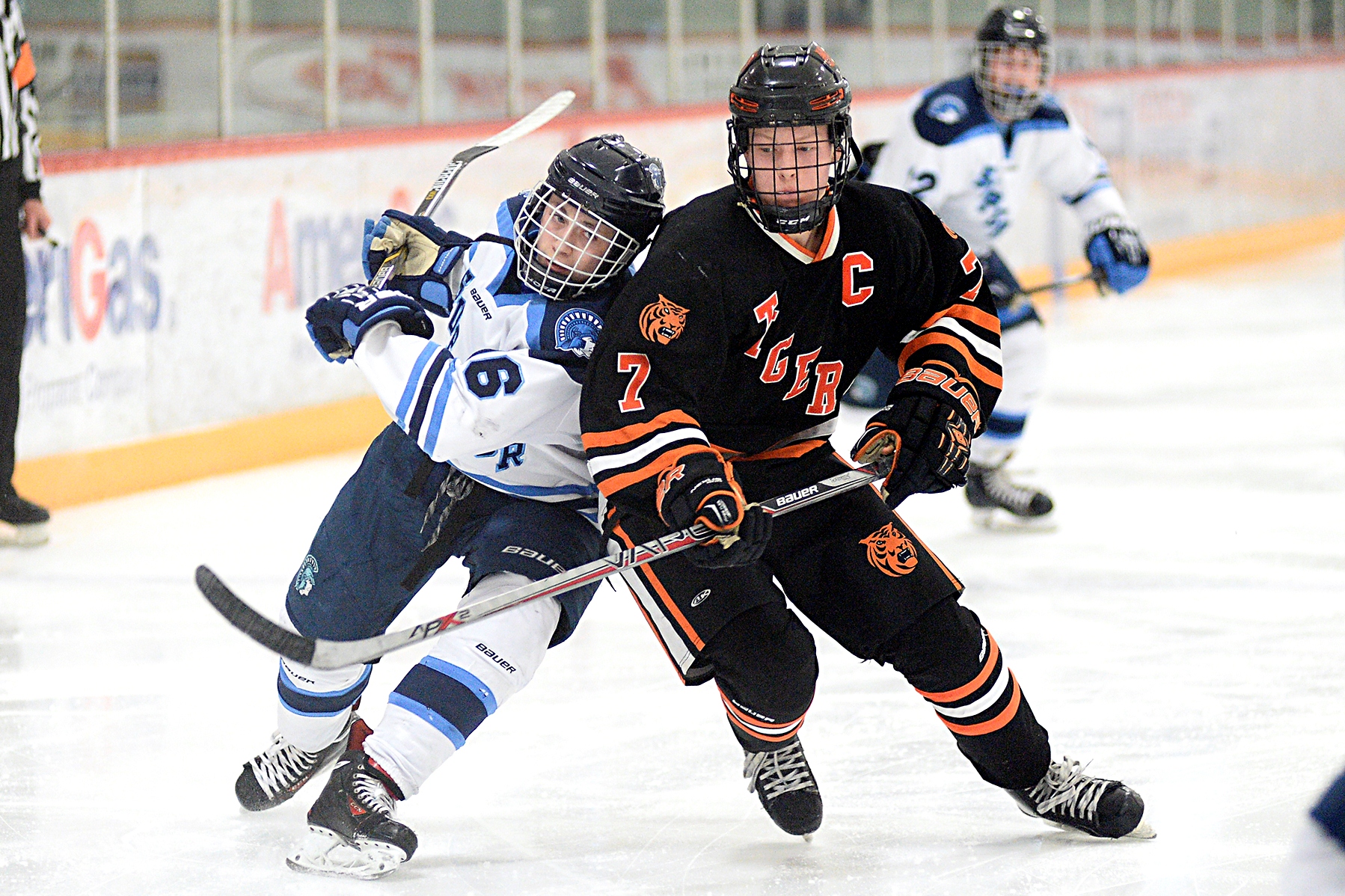 Believe it or not, we’re entering the final week of the regular season in Minnesota high school boys’ hockey. The regular season wraps up with games across the state Saturday, and both section and possible state seeding are still up for grabs.

The top of the Minnesota Hockey Magazine’s Class 1A top-10 rankings remained stable, but there was a shake-up of the order in teams in the back half. Thief River Falls made the biggest jump into the No. 7 spot with a pair of shutouts, and the Prowlers appear primed to earn the top seed in the Section 8A playoffs should they take care of East Grand Forks a second time. Greenway lost and fell a spot to No. 8, while St. Paul Academy was out-of-sight, out-of-mind, in dropping to the No. 10 position.

Winter’s storms robbed Hermantown of one of its two games last week, as Tuesday’s tilt at Farmington was cancelled. But the Hawks did travel to Brainerd Friday night and escaped with a 2-1 victory. Cole Koepke (29-22-51) scored both goals, including the game-winner just 16 seconds after Brainerd tied the score early in the third period. The senior winger has been on a scoring binge of late, tallying goals in four straight games with eight total goals. Despite ranking No. 1 or No. 2 in the state poll all season long, Hermantown might find itself as the No. 2 seed in the Section 7A playoffs should it lose the regular season finale against Hibbing/Chisholm. Both teams have yet to lose in section play and could be in for a monstrous section final match-up.

The Mustangs cranked up the offense last week to extend their winning streak to 10 games. In three big victories, Breck poured in a total of 25 goals, with eight different players scoring at least five points on the week. Chase Ellingson (28-30-58) led the way with six goals and eight points, while Mitch Machlitt (25-21-46) and Austin Heidemann (12-22-34) each had four goals. That’s the type of balance that will make the Mustangs a difficult out in the playoffs. Two teams who could challenge Breck in the playoffs are on the schedule to close the regular season: traditional rival Blake in a Section 2A battle and Mahtomedi, which finished third in last year’s state tournament.

After a five-week stretch in which it allowed almost no goals against (just four total in 10 games, with eight shutouts), the vaunted St. Cloud Apollo defense has been dented somewhat in recent weeks — but the Eagles continue to win. Since falling to Breck on Jan. 7, the Eagles have won nine straight, but have allowed eight goals in the last three games. That number is well above their season average of 1.43 goals against, which is still the best in the state (edging Hibbing/Chisholm’s 1.48 goals against). High-scoring defenseman Tanner Breidenbach (13-27-40) scored twice in last week’s 5-3 win at Fergus Falls and Skyler Rieland (6-5-11) added two in a win against Brainerd.

Speaking of Hibbing/Chisholm’s defense, the Bluejackets took care of business in a pair of Section 7A games last week, including an important 3-1 victory over surging Greenway last Tuesday. Junior defenseman Scott Perunovich (11-48-59), Jake Bestul (15-28-43), and Riley Versich (10-10-20) scored to give Hibbing a 3-0 lead midway through the second period, and the Bluejackets stymied Greenway from there. Freshman goaltender Ryan Ullan (21-2-0, 1.35, .937) continued his outstanding rookie season by stopping 34 of 35 shots in the two games. The Bluejackets could still earn the top seed in the Section 7A playoffs, as they visit No. 1 Hermantown to end the regular season on Thursday night.

Over its past six games, Mahtomedi’s record is just 2-2-2, but don’t let that fool you. The Zephyrs are in the midst of their toughest stretch of the season and have proven they can play with the top teams in both classes. The two losses came to the top team in Class 1A (Hermantown) and second-ranked in Class 2A (Stillwater) while the two ties are against perennial Class 2A powers St. Thomas Academy and Hill-Murray. Last week, Mahtomedi actually led STA 3-1 in the third period on goals from Jared Fladebo (4-5-9), Jack Heinsch (10-14-24), and Tommy Strelow (8-10-18), but couldn’t protect the lead in an eventual 3-3 tie. This Tuesday’s game against No. 2 Breck continues that “murderer’s row” of games for the Zephyrs, who also got a hat trick from Tim Kuivinen (15-9-24) and six assists from Andrew Kangas (10-27-37) in a 9-5 win at Totino-Grace last week.

Delano also had a game postponed due to weather last week, which sets up three quick Wright County Conference games to close out the regular season. The Tigers figure to be favored in all three, as they’ve only lost two conference games — both to Holy Family Catholic. In last week’s 7-3 victory at New Prague, Andrew Kruse (5-18-23) and Luke Olson (8-3-11) each scored twice, as seven different players picked up at least two points. The Tigers are likely locked into the No. 2 seed in the Section 2A playoffs unless they stumble this week, as they fell 9-7 against Breck way back on Nov. 24, also their only section loss against seven victories.

The Prowlers posted back-to-back shutouts last week, as goaltender Kade Nelson (18-5-0, 2.07, .902) made 31 saves in a 4-0 win at Roseau and then combined with Chase Myhrer to stop all seven shots in a 6-0 victory over Red Lake Falls. Lucas Magnusson (18-22-40) scored two goals in each game, while Ethan Johnson (35-17-52) posted three goals and two assists and continues to lead the team in scoring. Thief River Falls controls its destiny in the Section 8A seeding, as the Prowlers have won all nine section games and have a road date with two-time defending section — and state — champion East Grand Forks Tuesday night. The Prowlers won 5-0 in the first meeting on Jan. 19, the only section loss for the Green Wave.

It was a good week for the Class 1A top-10, as Greenway was the only one to drop a game, and it did so at No. 4 Hibbing/Chisholm last Tuesday night.  Taylor Lantz (19-31-50) scored the only goal for the Raiders, who were outshot 24-17 by the Bluejackets. The loss likely drops the Raiders into the No. 3 seed in Section 7A behind Hermantown and Hibbing, who meet to decide the top seed this week. The loss didn’t send Greenway into a funk, however, as Kole Kalisch (28-23-51) scored twice in each a 5-2 win against St. Paul Johnson and a 6-0 victory over River Lakes. Greenway closes out its regular season at Northern Lakes Thursday night.

With a second victory over Little Falls last week, St. Cloud Cathedral likely wrapped up the No. 2 seed behind St. Cloud Apollo in the upcoming Section 6A playoffs. After edging the Flyers by a goal two weeks ago, the Crusaders poured in five second-period goals in a 7-4 win last Monday night. Michael Spethmann (14-10-24) scored once in each period for a hat trick and Jake VanHalbeck (20-14-34) tallied the first two goals in the second to lead Cathedral to the important win. VanHalbeck kept the momentum going with two more goals in a 4-0 shutout at Alexandria and another two in a 6-4 win at Duluth Marshall. The junior forward’s six goals in three games were as many as he had scored in the previous 12 games. Sophomore goaltender Keegan Karki (11-5-0, 2.89, .887) has now started the past four games for the Crusaders, all victories.

The Spartans end the regular season with a busy week, as last week’s only game was pushed into this week’s schedule due to weather postponements. By the time St. Paul Academy visits Blake on Tuesday night, it will have been almost two weeks since its last game, a 4-3 loss at Breck. The only Section 4A opponent among the final four games is South St. Paul on Friday night. It’s the only match-up of the year between the two programs and a win should give St. Paul Academy the No. 2 seed behind Mahtomedi. Junior forward Jack Johnston (23-16-39) not only leads the Spartans in scoring, he also has a team-best five game-winning goals.