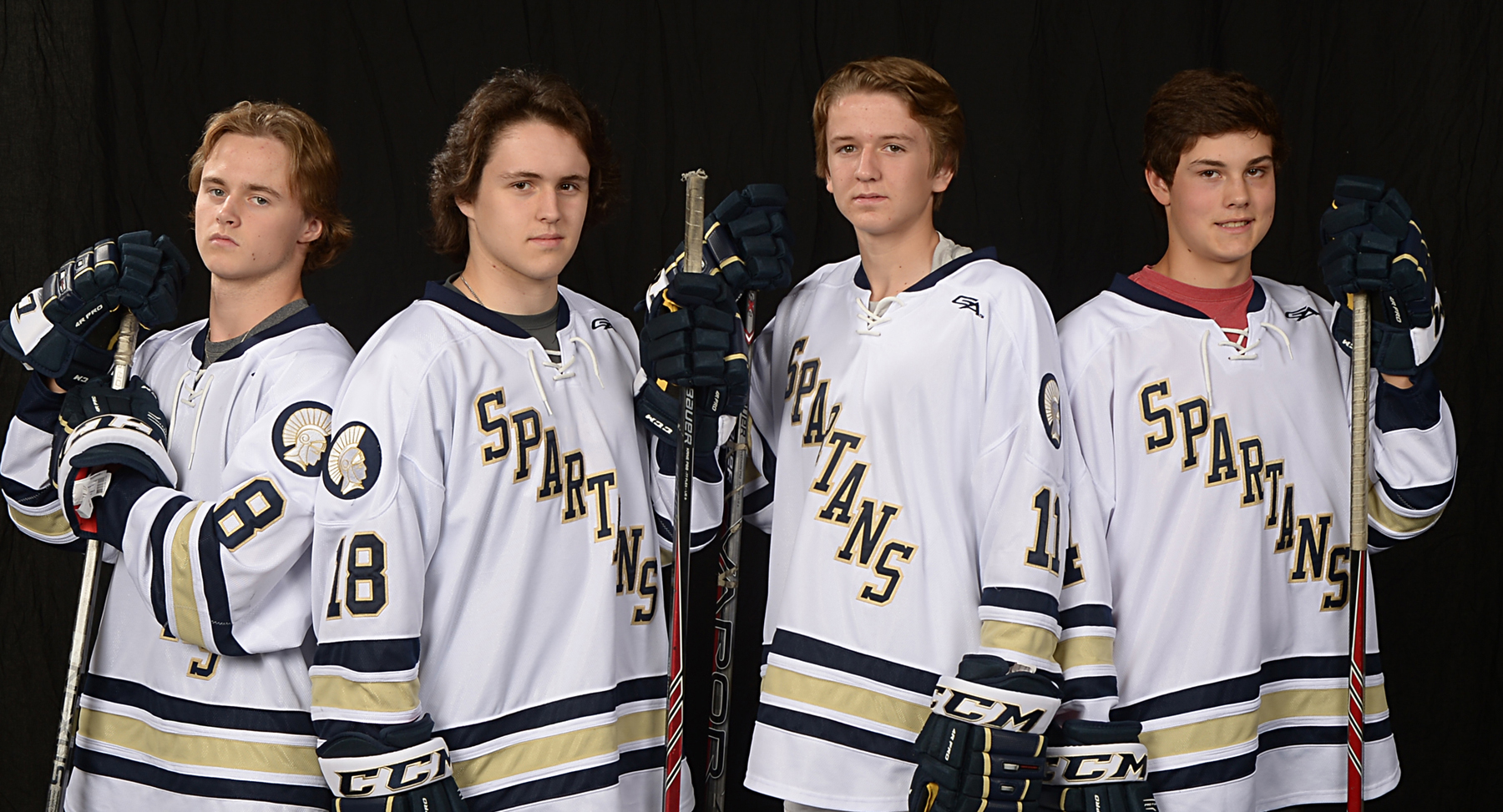 With a win over previously No. 5 Breck last week, St. Paul Academy is the most upwardly mobile team in this week’s rankings. (MHM Photo / Tim Kolehmainen)

Any time the top two teams in the Minnesota Hockey Magazine Class 1A Top 10 rankings match up, it’s a big week. This Friday night at Hermantown, the top-ranked Hawks put their position on the line against No. 2 Duluth Marshall in what should be in instant classic game.

Hermantown took over the top spot in the poll just two weeks ago after defeating the Hilltoppers in their own home holiday tournament semifinals, 6-2. The Hawks erased a 2-1 second-period deficit and surged to the victory — and to No. 1.

It’s not only a big game in the rankings, but also in Section 7A seeding, as they’ll likely run into one another again in the playoffs.

This week: vs. Duluth Marshall (Fri), at Bemidji (Sat)

The Hawks held up their regained No. 1 ranking well last week, routing both Grand Rapids and St. Cloud Cathedral by a combined 15-4 score. Neither opponent is a slouch by any means, which shows how well coach Bruce Plante’s team is clicking right now. What was expected to be a question mark this winter was in goal and perhaps defensively, but the Hawks haven’t allowed more than two goals in any game since November — a stretch of 13 straight games. Junior Luke Olson (11-1-0, 1.63, .926) has taken over the lead job in goal and been a stalwart. Junior defensemen Wyatt Aamodt (5-15-20) and Eric Gotz (2-12-14) have also played key roles, both offensively and defensively.

This week: at Hermantown (Fri), at Hibbing/Chisholm (Sat)

After a 10-game winning streak to begin the year, the Hilltoppers finally suffered their first defeat over the holidays, losing to top-ranked Hermantown in the semifinals of the Hilltopper Holiday Tournament on Dec. 30. A tie against No. 4 Mahtomedi followed a week later, a game in which Marshall was outshot 41-25, so there are a few cracks in the foundation. That said, both the Zephyrs and Hawks are among the handful of true contenders to win the state title this year — as is Duluth Marshall. It starts in the defensive end for the ‘Toppers, as they are anchored by goaltenders Alex Murray (9-1-1, 1.77, .929) and backup Cullen Mudrak (3-0-0, 1.33, .915). Scoring has been an issue at times for Marshall, as John McKenna (12-8-20) is the only player with more than seven goals. But there is balance, as a dozen players have tallied at least one goal.

East Grand Forks also lost to Hermantown in the loaded Hilltopper Holiday Tournament final over the break, but has come back with tight victories over Class 2A Blaine and North Dakota power Grand Forks Central. That’s been the modus operandi for the Green Wave, who have averaged 3.0 goals per game since their season-opening four-game winning streak. As expected, coach Tyler Palmisno has been getting much of his production from returning veterans Dixon Bowen (15-15-30), Tanner Tweten (9-13-22), Jace Pesch (8-7-15), and Grant Loven (4-9-13), who have combined for 36 of the team’s 52 goals. With graduation decimating the defensive corps from last year’s state champion, it’s perhaps a surprise EGF is only allowing 2.07 goals per game, although goalie Josh Weber (9-2-0, 1.79, .904) backstopped last year’s tourney run.

Despite losing big to St. Thomas Academy and tying Duluth Marshall last week, Mahtomedi holds onto the No. 4 position in the rankings. It’s more an indication of the opponents last week than the Zephyrs stumbling. The Hilltoppers and Cadets have lost a combined once this winter and both are ranked No. 2 in their respective classes. Through 12 games, Mahtomedi had been powered by its balanced offense, which coach Jeff Poeschl said extended through his top three lines. But in three games last week, Mahtomedi scored a total of four goals. A cold spell has hit. Look for leading scorer Jack Becker (11-10-21) to help jump Mahtomedi out of it. He’s the son of Russ Becker, who played at Virginia and Michigan Tech (1984-88) and was drafted by the New York Islanders in the 11th round in 1984.

This week: vs. Sauk Rapids-Rice (Tue), vs. River Lakes (Thu)

Look at the Cardinals rise. Last week’s home game against Moorhead was labeled a chance for Alexandria to show its unbeaten record was no fluke — and the Cardinals did just that, beating the Spuds 3-1 on goals from Alec Wosepka (12-3-15), Chris Leary (3-1-4), and Zach Johnson (7-9-16). Christian Reimers (9-0-1, 1.86, .924) was excellent in goal, stopping 37 of 38 shots and frustrating the Spuds. With another stout defensive effort, the Cardinals have allowed more than three goals just once all year (their 4-4 tie with St. Cloud Apollo on Dec. 4) and have six games giving up one or no goals. You can’t beat ‘em if you can’t score on ‘em appears to be coach Ian Resch’s motto.

Another team on the rise is St. Cloud Cathedral, which had a six-game winning streak stopped last Friday by Hermantown. There’s no shame in losing to the Hawks right now, however, and four of Cathedral’s five losses are to teams currently ranked ahead of it. Until giving up five goals to the Hawks’ potent offense, Cathedral had made its living on shutting down opponents. Since losing their first three games of the season and allowing 19 total goals, the Crusaders have given up just 20 total goals in the last dozen games (and that includes the five allowed to Hermantown). Junior Logan Neu (15-13-28) continues to power the Crusaders’ offense, as no other player has more than six goals. He’s scored in five straight games and 10 of 15 games overall — and has only been held off the scoresheet once (a 3-2 loss to Alexandria on Dec. 20).

The young Spartans got a nice boost in a “show me” game at Breck last Tuesday, defeating the Mustangs 3-1 on their home ice at Anderson Arena. Leading goal scorers Jack Johnston (14-8-22) and Matt Dahlseide (11-18-29) scored in the third period to break a 1-1 tie and send St. Paul Academy to the victory and a jump over Breck in the rankings. Still, there is work to be done, as the Spartans were outshot 37-21, including 17-4 in the decisive third period. Andy Beran (7-0-0, 1.43, .931) came up big in that frame, stopping all 17 shots as Breck hammered away looking for the tying goals. The freshman netminder has allowed a total of three goals in his last four starts as he’s shared time with David Nicholson (4-2-0, 1.50, .922).

Sometimes you have to beat the teams ahead of you to get bumped up in the rankings. Breck continued its yo-yo act this winter with two losses in three games last week, although the Mustangs outshot all three teams (29-25 over Moorhead, 55-14 over Minnehaha Academy, and 37-21 over St. Paul Academy). It shows that the Mustangs aren’t getting puck luck right now in that they scored just seven goals on those 121 shots. Tyler Scott (11-8-19) and Chase Ellingson (10-9-19) continue to lead Breck in scoring. Ellingson netted three of the seven goals last week, including both in the overtime loss to Moorhead, but other scorers will have to step up.

This week: vs. Hibbing/Chisholm (Tue), vs. Cloquet-Esko-Carlton (Thu), vs. Blake (Sat)

Denfeld split two games against neighboring schools last week, losing a tough 4-3 game to rival Duluth East on a tie-breaking goal with 28 seconds left in the second period, then surging past Proctor with six goals in the final two periods, all scored by six different Hunters. In those final two frames, Denfeld outshot Proctor by a wide 29-9 margin. Mountainous defenseman Nick Thompson (10-14-24) continues to lead the Hunters in both goals and points, although Dylan Michaud (5-14-19), Jake DeCaro (9-6-15) and company are hot on his heels. Coach Kevin Smalley has rotated his goaltenders all season, as well, with senior Westley Cook (5-3-0, 2.76, .877) splitting time with junior River Alander (5-2-0, 1.60, .935), who got the 12-save shutout against Proctor.

The Tigers are a newcomer to the top 10 rankings, taking over for an injury-ravaged Warroad team that has lost three straight one-goal games. After they heal, the Warriors will be back but it’s time to recognize a great start by Delano/Rockford. Delano came out of the holiday break with some momentum after playing in the tough Hilltopper Holiday Tournament, winning three straight games, including an impressive 5-3 defeat of Class 2A Holy Family Catholic. Gabe Halonen (6-4-10) and Daniel Keranen (12-9-21) scored third period goals as the Tigers broke a 3-3 tie through two. They’re just two of 13 Tigers with at least two goals and/or six points, led by super sophomore Ben Meyers (8-18-26).