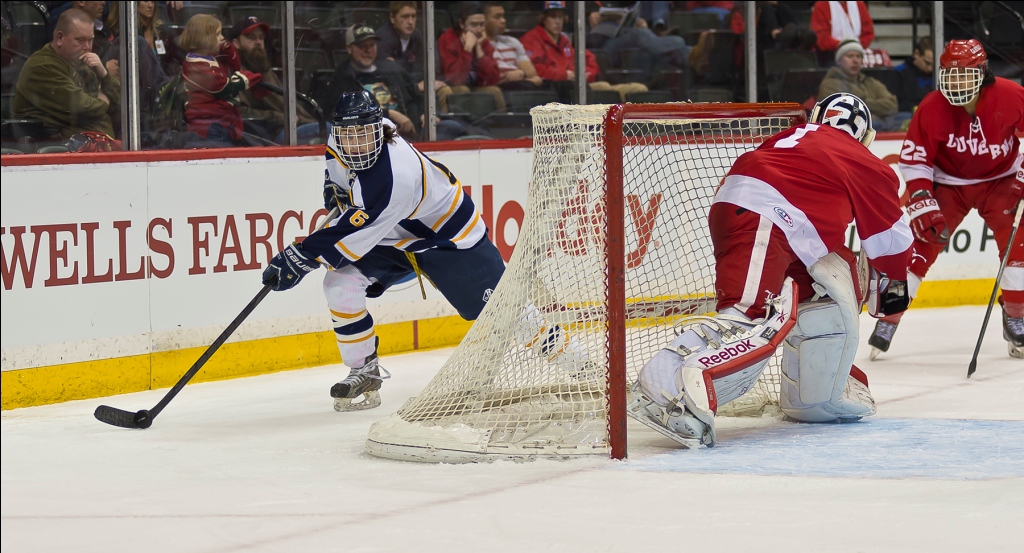 The more things change, the more they stay the same. It’s another week, another top ranking for Hermantown in the Minnesota Hockey Magazine Class 1A Top 10 as we enter late January.

The Hawks have finished as the Class 1A state runner-up the past five seasons, falling twice each to Breck and St. Thomas Academy and last year to East Grand Forks in the title game. But this may be coach Bruce Plante’s best team in that stretch. This may be the team that breaks the “curse.”

Is it to early to pencil the Hawks into the state final again?

This week: at Proctor (Tue), at White Bear Lake (Fri)

Since losing to Hopkins in overtime on Dec. 6, Hermantown has been almost perfect. The Hawks have been flawless in the win-loss column, ripping off 12 straight victories by big margins. No team has gotten closer than two goals of Hermantown in that stretch, with an average margin of victory of 6.17 to 1.50. That continued last week with resounding victories over No. 3A Duluth Marshall (5-2) and a ranked Class 2A Bemidji (6-1). In those 12 games, the Hawks haven’t allowed more than two goals, a testament to the team’s defense and goaltender Luke Olson (13-1-0, 1.61, .929), who has seen just over 20 shots per game. Seniors Ryan Kero (17-25-42) and Nate Pionk (19-18-37) continue to power a high-scoring offense.

The Green Wave romped over a pair of Section 8AA teams last week by a combined 12-1 score. Thursday’s 4-1 victory against Bemidji avenged an earlier defeat to the Lumberjacks, the only other Minnesota school the Green Wave have lost to other than No. 1A Hermantown. Grant Loven (8-10-18) netted a pair of goals, while Garrett Lieberg (4-1-0, 1.89, .913) made 25 saves on 26 shots. He’s filled in nicely for injured Josh Weber (9-2-0, 1.79, .904) in goal, winning three straight starts while allowing just three goals. The East Siders get a chance to avenge one of their other losses this week with a Thursday game at Grand Forks Red River (N.D.).

Mahtomedi cruised through a busy week with three big wins, keeping the Zephyrs on track to be the top seed in the Section 4A playoffs — believe it or not, just a month away now. Coach Jeff Poeschl’s team still hasn’t lost to a Class 1A team this season, as the two defeats came against top-10 Class 2A powers (Hill-Murray and St. Thomas Academy). Against Class 1A teams, the Zephyrs are 10-0-1 and have outscored those 11 foes by a combined 64-16. That’s enough to place Mahtomedi squarely within the top contenders for a state title. Juniors Jack Becker (14-17-31) and Jack Heinsch (14-13-27) had a big week. Becker tallied three goals and seven assists in the three games, while Heinsch added three goals and four assists. Not surprisingly, they’re 1-2 in scoring for the Zephyrs.

The only undefeated team remaining in Class 1A kept rolling along last week, although it wasn’t easy. Sauk Rapids-Rice gave Alexandria a scare on Tuesday, carrying a lead into the second period before goals from Eli Heckert (2-5-7) and Parker Revering (6-9-15) rallied the Cardinals for a tight 2-1 win. The Cardinals haven’t been blowing teams out, but they have continued to win. Eight of their victories have been decided by three goals or less and Alexandria is 4-0-0 in one-goal games. Coach Ian Resch’s team has a chance to avenge its only non-win this week, when they travel to St. Cloud to face Apollo on Tuesday. The teams tied 4-4 in their first meeting on Dec. 4, since which Alexandria has won 11 straight games.

This week: at Warroad (Fri), at Thief River Falls (Sat)

The Hilltoppers fall down the rankings a few spots after a winless week. There’s no shame in losing to Hermantown for the second time in 17 days, but a 3-3 tie at Hibbing/Chisholm last Saturday hurts the ‘Toppers rank — especially when the teams ahead of them continue to win. Marshall did rally from a 3-1 third-period deficit against the Bluejackets, as Jon Hansen (4-6-10) and leading scorer Derek Farrell (8-15-23) tallied late goals. That was part of a 14-2 shot edge in the third period, although the ‘Toppers only managed one shot on goal in the eight-minute overtime as Hibbing tightened up. The final shots were 25-20 in favor of Marshall, with Cullen Mudrak (3-0-1, 1.68, .896) making 17 saves. Mudrak got the start in place of regular goaltender Alex Murray (9-2-1, 2.03, .920).

The Mustangs begin to inch back up the rankings, largely on the strength of a 3-2 overtime victory at No. 10A St. Cloud Cathedral last Thursday. Leading scorer Chase Ellingson (15-12-27) scored the game winner on a power play at 2:06 of overtime — the only shot for either team in the extra session. Despite the score, Breck controlled much of the game, outshooting the Crusaders 51-23. This isn’t the typical high-powered Mustangs of the past few years, as coach Les Larson’s team has played a bit more tight, defensive games, anchored by goaltender Stephen Headrick (12-6-0, 1.43, .922). The Mustangs could climb even higher in the rankings with a big week that includes games against traditional rivals such as Blake and Rochester Lourdes, along with a rematch at St. Paul Academy, which beat them 3-1 on Jan. 6.

This week: at Thief River Falls (Fri), at Warroad (Sat)

The Hunters are No. 8 in this week’s rankings, yet stand just third in their own Section 7A behind No. 1A Hermantown and No. 5A Duluth Marshall. That’s how tough the northeast corner of the state is this winter, as the three schools separated by about 10 miles of Duluth area hillside should stage a wild playoff. Since losing back-to-back games to Class 2A Bemidji and Duluth East, Duluth Denfeld has won four straight games by a combined 22-6 score. Big defenseman Nick Thompson (10-20-30) continues to lead the Hunters in scoring, although Jack DeCaro (11-9-20), Cody Budisalovich (10-8-18), Cam McClure (9-13-22), and Adam Shykes (9-8-17) have tightened up the goal-scoring battle. That scoring balance is key for coach Kevin Smalley’s team in a playoff scenario against the other top teams.

This week: vs. Mound-Westonka (Tue), vs. Litchfield/Dassel-Cokato (Fri), vs. St. Cloud Cathedral (Sat)

Delano/Rockford picked up a big Section 2A seeding win last Friday, beating defending section champion Orono on its home rink, 6-3. The Tigers scored three times in the final 7:35 of the game to erase a 3-3 tie, getting goals from Gabe Halonen (9-4-13), Brady Miller (6-7-13), and Karl Peterson (9-6-15). Halonen and Miller each had two goals in the game, bringing to nine the number of Tigers that have at least 11 points on the season. Coach Gerrit van Bergen’s team is on a five-game winning streak as it continues the second round of Wright County Conference play. Equally impressive last week was a 7-1 romp over New Prague, a team that reached the state tournament last year and just joined the conference after the disbanding of the Missota. The Tigers notched six first-period goals and cruised the rest of the way.

This week: vs. Orono (Mon), at Delano/Rockford (Sat)

St. Cloud Cathedral hangs onto the No. 10 spot by a slim margin over St. Cloud Apollo, mostly courtesy of the Crusaders’ head-to-head 2-1 win back on Dec. 9. Cathedral has lost two straight since jumping back into the rankings two weeks ago, although both have come against top-10 opponents (5-2 to No. 1A Hermantown and 3-2 in overtime to No. 7A Breck). Coach Eric Johnson’s team is in the midst of a Section 2A scheduling gauntlet, losing to Breck and then playing Orono and Delano/Rockford this week. Junior Logan Neu (15-14-29) has continued his scoring surge, netting goals in eight of the last 11 games and recording at least one point in all but one game this winter. Senior goaltender Zach Fritz (8-6-0, 2.91, .903) has faced more than 50 shots in each of his last two starts against Breck and Hermantown.