Prowlers sneak into this week’s rankings while Hermantown holds steady 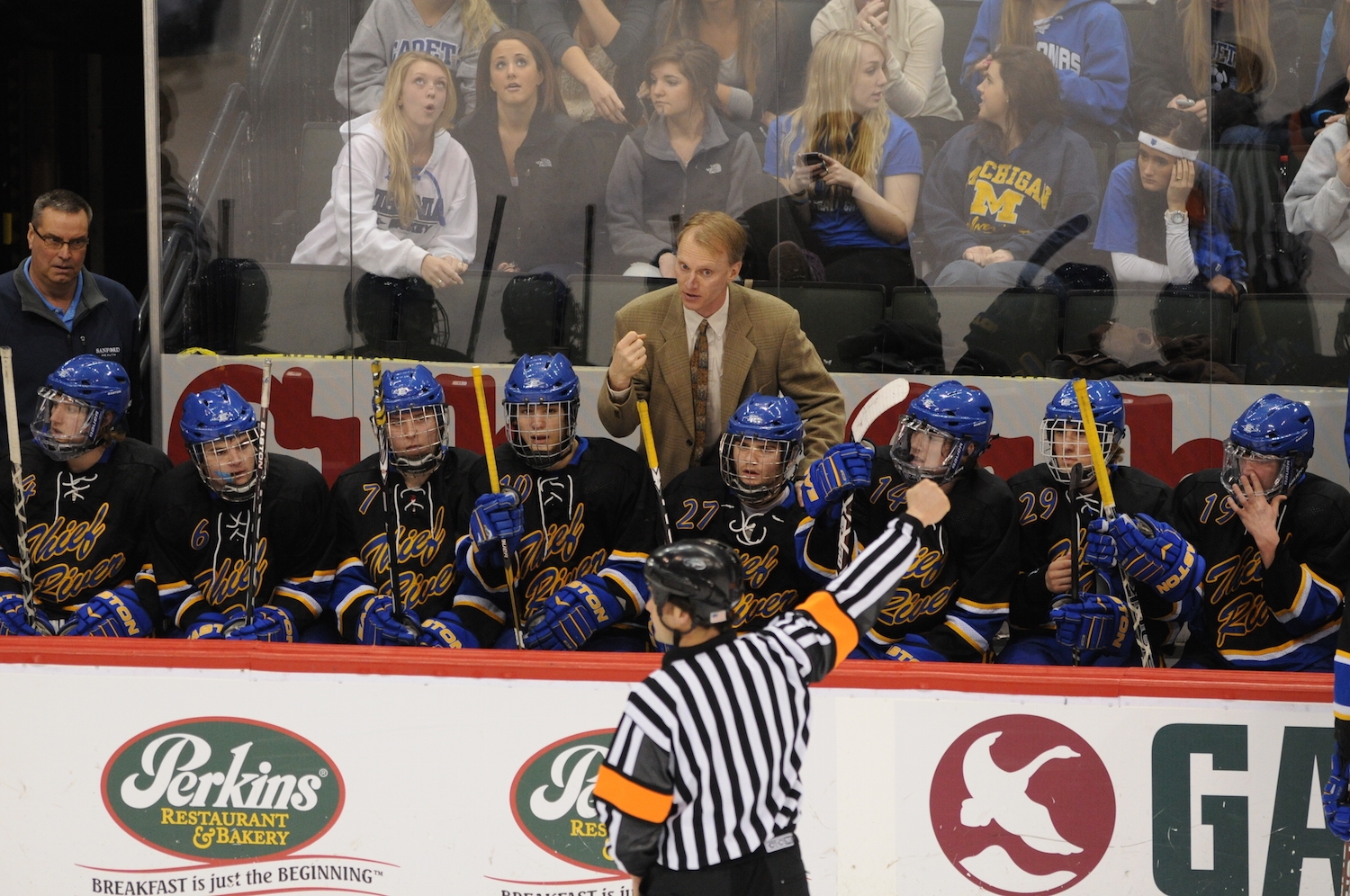 Thief River Falls coach Tim Bergland has his Prowlers back in the top ten with aspirations of a return to St. Paul. (Photo courtesy of Tim Kolehmainen / Breakdown Sports USA)

Prowlers sneak into this week’s rankings while Hermantown holds steady

The top four in the Minnesota Hockey Magazine’s Class 1A rankings remain unchanged as December rolls in with a blizzard, but the rest of the top 10 is storm-tossed. Thief River Falls makes its debut at No. 9 this week after winning three home games last week, including a televised 6-3 victory against rival Roseau. The Prowlers showed a statewide audience their depth and speed, soundly beating an always-tough Rams program.

Meanwhile, Sartell-St. Stephen, Greenway, St. Louis Park, and St. Cloud Tech had impressive weeks that vaulted them into consideration. The Sabres traveled north and took home victories at Crookston and Warroad, while Greenway allowed just three goals in winning its three games. St. Louis Park and St. Cloud Tech are also undefeated in their first seasons in Class 1A after dropping from 2A in the latest round of section realignment.

Halfway through its opening gauntlet of games against four straight Class 2A teams, and Hermantown looks solid. The Hawks took down Wayzata after the Trojans were coming off a Turkey Trot title win over Edina, signifying they could be ranked in the top-five in Class 2A. Ryan Sandelin, the son of current University of Minnesota-Duluth coach Scott Sandelin, enjoyed his return to forward, scoring five goals in last week’s two victories. Out of team need, he played defense last year as a sophomore. Thursday’s visit to Duluth Marshall lost some of its steam after the Hilltoppers moved to Class 2A, but it is still a good rivalry game.

After one game, the same questions asked in the preseason remain for Breck.  The Mustangs certainly can score, as they posted nine goals against a good Delano squad, led by four from senior sniper Chase Ellingson. But Breck also allowed seven goals. Last year, when the Mustangs gave up only 1.4 goals per game, they allowed no more than four goals in any game — and three or fewer in every game after the first week of December. A big home slate will test the Mustangs’ new goaltenders this week, including visits from northwestern powers East Grand Forks and Thief River Falls.

The young Spartans passed their first big test of the year, traveling the four hours southwest to Luverne and beating the high-flying Cardinals, 5-4. Luverne scored early in the first period, but SPA ripped off four straight goals to take control. Matt Dahlseide led the way with a goal and two assists, while sophomore Andy Beran stopped 28 of 32 shots in goal. Coach Matt Funk’s emphasis on scheduling shows again this week, as the Spartans host two other top-10 teams in Mahtomedi and East Grand Forks. Victories in both would solidify the Spartans hold on a top-three ranking.

So much for taking time to adjust to a new roster and coaching staff. Two-time defending state champion East Grand Forks welcomed new coach Scott Koberinski with three home victories to open the season, although the last two were one-goal thrillers over Totino-Grace (on a Tommy Pace overtime tally) and St. Cloud Cathedral. Veterans Tanner Tweten (2-2-4) and Braden Shea (1-3-4) lead the Green Wave in scoring along with newcomer Nick Derrick (3-1-4). The Green Wave could move up in the rankings, as they travel to two of the teams ranked ahead (No. 2 Breck and No. 3 St. Paul Academy) this weekend.

Cathedral suffered its first loss Saturday at East Grand Forks, rallying from three goals down in the third period to push the Green Wave, but the hole was too deep to dig out completely. That result leaves the Crusaders ranked hot on EGF’s heels in this week’s rankings. Logan Neu (5-1-6) continues to lead the Crusaders in goals, but trails Jack Petroske (2-5-7) in points after his big week. Petroske posted two assists in each of last weekend’s games, including one on Michael Spethmann’s game winner at Warroad.

Like top-ranked Hermantown, Mahtomedi coach Jeff Poeschl tested his team with two early games against good Class 2A teams. Unlike the Hawks, however, the Zephyrs lost one of those games at Cretin-Derham Hall to drop a few a spot in the top-10 rankings. Senior goaltender Will Swanson allowed just four goals on 66 shots in the two games (for a 93.9 save percentage), but Mahtomedi only scored three times total on offense. A huge Section 4A game looms Tuesday night as the Zephyrs travel to St. Paul Academy.

This week’s home game against Willmar is the only game in a 17-day stretch for St. Cloud Apollo, as the Eagles start the season with a light slate. Apollo is looking to erase the memory of a season-opening 2-1 loss at Bemidji. The Eagles led 1-0 through two periods, but couldn’t hold off the Lumberjacks. Nick Althaus stopped 33 of 35 shots and is in his fourth year as the starter in goal. He’s led Apollo to two state tournament berths and will be the team’s anchor again this winter.

Despite not playing last week, Hibbing/Chisholm moves up a spot in the rankings. Such was the impressive nature of the Bluejackets two victories the previous week, beating Little Falls and Mound-Westonka by a combined 12-1 score. Ryan Ullan started both game in goal, stopping 41 of 42 shots, while Jake Bestul (2-5-7) and defenseman Scott Perunovich (1-6-7) lead the team in scoring. The Bluejackets hit the road this week for games at Section 7A rival International Falls and at Roseau the next day.

The Prowlers jump into the top-10 rankings for the first time courtesy of a big opening week with three home victories. Ethan Johnson (6-3-9) and Thief River Falls looked impressive in a televised opening victory over Roseau, then followed it up with tight wins over Twin Cities private schools Blake and Totino-Grace. Johnson, who showed the edge he plays with, tallied a hat trick against the Rams while Lucas Magnusson (3-2-5) added two goals. A weekend trip to the Twin Cities to face Tartan and No. 2-ranked Breck could have the Prowlers make an even bigger jump in the rankings.

After scoring 19 goals in two big victories, the Cardinals fell back to earth a bit in a 5-4 home loss to St. Paul Academy last Saturday. The Cardinals trailed 4-1 early in the second period before mounting a rally that fell just short. Sophomore Declan Beers (6-4-10) has had a big start to his first varsity season, sharing the team scoring lead with Jaxon Nelson (6-4-10). Beers scored four goals in an 8-3 victory against LeSueur-Henderson/St. Peter/Tri-City United.